Have you ever noticed funny looking, pale things in the back of your throat, lodged in one or both tonsils?  Then you might have tonsil stones.
This reminds me of a story, a story of a young professional woman with a problem, a problem that’s not highly unusual but one that plagues a number of individuals who present to me from time to time.  She complained of “crud in my tonsils.”  Though not compromising her health, causing neither tonsil infections nor significant sore throats, she nevertheless was quite annoyed by digging or coughing these things out on a regular basis.

“So what the heck are they?” she inquired upon first seeing her.
“Do they smell bad, taste nasty, and look sort of like cottage cheese kernels?” I questioned in pseudo-medical terminology.
“Yeah!  Exactly!  And everyone says my breath always stinks!”
After taking more history, doing the physical exam and all the other stuff a doctor is supposed to do, I came up with a diagnosis.
“You’ve got tonsil stones.”
“Yeah, that’s what I thought.  Someone I know said so.  So, what are they and how do I get rid of them?  They’re really bugging me.  I’m busy with work and life and don’t have time to deal with this.”  You probably get the picture she was a strong-willed, no-nonsense sort of person.
“Well, they’re not actually stones per se,” I explained, “ because you can roll them in your fingers and squish them around, but they do contain calcium, ‘cause sometimes you can see these on x-rays or C.T. scans.   Come to think of it, I just saw these on some guy’s C.T. scan not too long ago. Really interesting, but we did the imaging for some other reason.   Oh sorry, I’m digressing.”
“No problem, doc.  Say, you’re kinda weird, but that’s okay, as long as you fix me.  Let’s take out my tonsils.”

I then went onto a long explanation about her problem, which were more correctly termed tonsilloliths or tonsilliths.  Anyway, we discussed the nature of this problem, how they form when mucosal epithelium (the lining tissue of the mouth and throat) naturally sloughs off, but in some people this sloughed epithelium traps into a tonsillar crypt—a space or crevice or hole within the tonsil.  These crypts are natural features of the tonsil.  This trapped epithelium can further accumulate, building upon itself much like an oyster builds a pearl, and then becomes colonized with bacteria typically found in the mouth.  This imparts the foul odor and taste.  And voila!  A tonsillith is created. 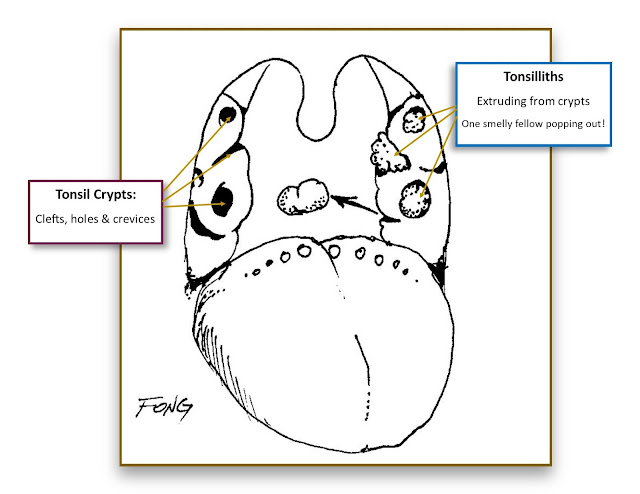 This typically is a benign condition especially if there is no underlying tonsil infection and the tonsil does not look odd or suspicious for something like a tumor.  I told her about typical treatment measures for this, such as daily warm salt water gargles even when not noticing the tonsilliths since this may help cleanse the tonsils and prevent formation in the first place.  I also suggested she may use a Water-Pik to cleanse the tonsils daily which would blast the crypts and get them really cleaned.  Since there has been no significant throat pain or recurrent tonsillitis with these, I advised against a tonsillectomy unless this worsens in the future, causing infections or throat pain, difficulty swallowing or if she felt it was significantly impacting her quality of life. 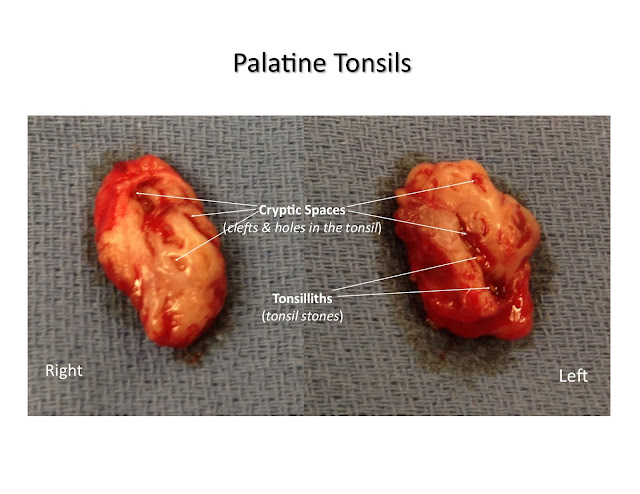 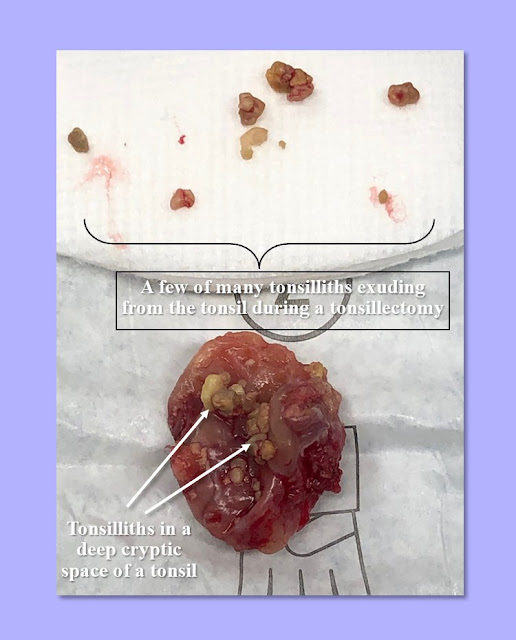 I try to dissuade patients from surgery such as a tonsillectomy for situations such as this, since a tonsillectomy in adults is highly painful.  And when I say painful, I mean the worse pain you’d ever experience in your entire life.  I even told her that some of my female patients thought it was worse than childbirth.
She was rather skeptical, for her main reason for this appointment was to schedule surgery, but being a reasonable woman, she was willing to try these conservative measures first.
Not more than a week later I get a call from her.
“Doc, I don’t care what you say about surgery or how bad the pain is, but you’re gonna take my tonsils out!”
“What?  So soon?  Have you done the gargles, the water-pik, you know, all those things we talked about  before?”
“I was on a date and at a really nice place,” she continued, “and one of those damn stones worked their way out when I was talking, I gagged and coughed and out it flew into the air, above the table and onto my date’s plate!”
“Oh, wow, that’s not-so-good.  But we ought to try something else other than surg—“
“Forget it!  You said if it ‘affects your quality of life’, then we should take them out.  I’m quoting you.  That’s what you said and if you think this isn’t a quality of life issue, then you’re nuts!”
Anyway, we did her surgery, took her tonsils out, and she came back for her postop appointment two weeks later.
“You know, I feel much better now.”
“So soon?  How was the pain?”
“The first week was bad, like you said it would be, but not as bad as you made it out to be.  Besides, I no longer have the awful taste in my mouth and everyone says my breath no longer smells.  Thanks for helping me out.“
To my recollection, I think she slapped me on the back as she left, saying, “Nice job.”
Anyway, that’s what it amounts to regarding the mystery of tonsilliths.  For those who have these but don’t really bother you, and the tonsils don’t look unusual, then we typically follow the adage:
If it ain’t broke, don’t fix it.