“I’m a deviant,” cried the nasal septum.  “an outcast, an abnormal-freak of-nature through no fault of my own.  Nobody loves me!”

So how did he get that way?  And why are we personifying a body part and calling it a ‘he’?  Too much beer, I suppose.

Actually, patients will present with a complaint, such as nasal stuffiness or blockage. Some will actually state as a chief complaint, “I have a deviated septum.”  I’ll ask, “How did you discover that?”  Answer: “’Cause my doctor told me so.”  Okie-dokie.

Some of you are no doubt wondering aloud to anyone within earshot: “What/where is the nasal septum, what’s its function, how does it become “deviated, and why should I care?”

The nasal septum, also referred to simply as “the septum” is the partition or wall that separates the inside of the nose into right and left sides.  If you place your fingers inside each nostril, you’ll feel the anterior-most part of the septum (that is, the front-most part) between your fingers.  The diagram below shows a longitudinal view or sagittal section of the face showing the right side of the  septum (note: when labelling something right or left, it is customary to name this from the patient’s perspective—i.e., right = the patient’s right side and left = the patient’s left). 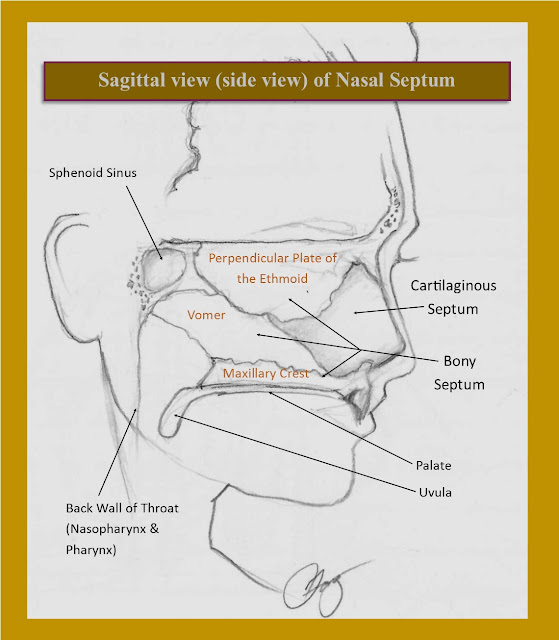 Notice the front part is mostly cartilage, whereas farther back (farther posteriorly, in medical jargon) it is predominately bone.

The turbinates (also knows as conchae) are outpouchings of tissue, having bone as its core and surrounded with a spongy-like soft tissue.  The turbinates, the septum and everything else inside the nose is lined with a pink, smooth tissue called the mucosa.  The mucosa secretes fluid and also emits heat, as does any living tissue in the body.  This serves a function. 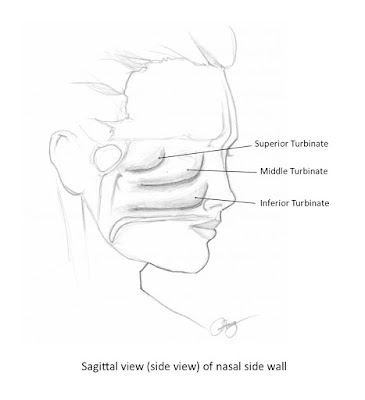 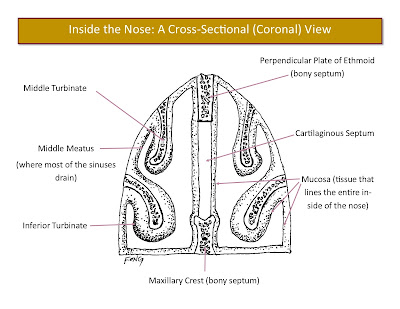 The septum along with the turbinates allows for laminar airflow, where air flows in an organized layered fashion.  This allows for proper warming and humidification of the air by the nasal mucosa before it hits the trachea and lungs, which reduces the resistance to breathing air through the nose.  If there is no septum or turbinates, then there is a condition of turbulent airflow, where air molecules move in a disordered whirling and eddying fashion.  This type of flow prevents the proper humidification and warming of the air, causing nasal and throat dryness and irritation as well as irritation of the lining tissue of the trache and lungs, making breathing unpleasant and less efficient.


With a deviated septum, one side is narrower than the other.  The septum deviates to one side or the other in a variety of ways.  The figure below is an example, where the left drawing is closer to the front of the nose (anterior) showing the cartilaginous septum displaced off the maxillary crest and deviating to the left, abutting into the left inferior turbinate; the right-hand drawing is farther back (posterior), showing a large bone spur deviating to the left and impinging into the left inferior turbinate. 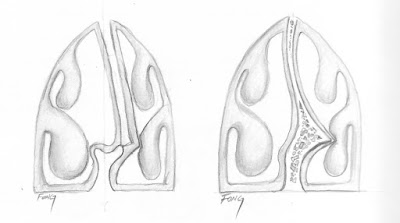 The narrow side is more restricted causing increased work of breathing, while the other side has more space; however, both will cause turbulent airflow.  Due to this phenomenon, some patients feel they have a more difficult time breathing on the side opposite to the septal deviation.  Also, often the turbinates on the more open side tend to increase in size to take up the extra space, something known as compensatory hypertrophy of the turbinates, and another reason breathing can be difficult on that side.  This often occurs with the inferior turbinate, which happens to be the largest of the three turbinates.

How a nasal septal deviation occurs:
A deviated septum can occur from nasal injury.  Sometimes patients recall a particular incident, such as a sports-related injury, a fall, or a fist to the nose by their kid sister who then ran off to mom and dad before the injured party could deliver retribution.

Sometimes this is congenital, meaning formed during fetal development.  Another theory is trauma during birth, where the septum gets bumped out of place as the fetus passes through the birth canal, or perhaps as the doctor unknowingly had one finger wrapped around the baby’s nose while she/he struggled to deliver the neonate.  Amidst the scurry of action and excitement, and while mother screams something to the dad (for instance, “This is all your fault, you stupid, son of a…oooowwww!  Get that kid out of there!”) an inadvertent thing or two could occur during childbirth, so I was told.

Why should you care?
A deviated nasal septum can cause problems.  The main one is difficulty breathing through the nose.  This leads to mouth breathing which is not natural.  Since the normal warming and moisturizing of air is bypassed by chronic mouth breathing, mouth and throat dryness, sore throats, and irritation of the lungs can occur, making life not-so-pleasant.  Many people also feel the cannot exercise well.  Though with increased physical activity one tends to breathe with the mouth open, it is actually a combination of both mouth and nasal breathing.  Trying exercising with a cold, or better yet, go out for a run and plug both sides of the nose (I’ve done  this)—it’s extremely difficult to continue running in this fashion.  Even at rest many people find it difficult to breathe, thus negatively impacting their quality of life.

Annoying crusting due to nasal dryness also can occur.  This is due to mucous normally secreted by the mucosa becoming caked up and solid, and entirely unpleasant condition.  This leads to the phenomenon of digital trauma.  Digital trauma has nothing to with computers or the internet or high-tech stuff.  Here’s some simple math to explain it:

Digital = finger-related.  Trauma = injury.  So, in other words, Digital Trauma = Nose Picking.  Simple as that.  Nose-pickers = a subset of deviant human behavior.

Nose bleeds also can occur due to crusting and digital trauma.  Also, blood vessels on the septum can become more prominent and more superficial.  Such vessels bleed easily with the slightest touch, sneeze of nose-blowing.  Sometimes they’ll bleed spontaneously.

Sometimes facial pain occurs especially when the septum touches the side-wall of the nose, stimulating sensory nerves that can radiate to the face.  This can cause migraine-like facial pain or headaches as well, especially with prominent bone spurs impinging into the side -wall of the nose; think of a sharp hard object stabbing your nasal cavity from the inside.  Also the deviated septum can impair sinus ventilation if it blocks the middle meatus increasing risk of sinus infections and sinus pain.

Enough said about the septum.  Despite his (or her) cries of not being loved at the outset of this post, your nasal septum serves a vital function.  So give it all the love and attention it justly deserves, and keep your fingers away from it.

We’ll talk about surgery to fix this, known as a “Septoplasty,” in another post.