October 22, 2017
This is a picture of some guy’s right ear.  We'll call him Patient 1.  For simplicity’s sake, I’ll italicize medical terminology between parenthesis.  The ear obviously doesn’t look right (abnormal).  It’s swollen (edematous), and when you squish it about between your fingers (palpate it), it surprisingly feels as if there is some fluid deep to it, as it is quite mushy (fluctuant) and altogether entirely unsettling.

He tells me this occurred about a week and a half ago, after hitting it hard against the water while wake-boarding on the river, being pulled by a fast-moving boat.  He went to the emergency room a few days later since it started to swell even more and was given some antibiotics.  He went back to the ER since it wasn’t getting better after a week, and was told to see an ENT doc and thus the reason he came to my office.

He has an auricular hematoma.  Hematoma is a collection of blood.  It is somewhat of a misnomer, as -oma in medical jargon means “tumor”, but this is not really a tumor.  Hema refers to blood.  So this technically would be a “blood tumor” which again isn’t entirely the case, but more of a collection of blood in a space that shouldn’t exist.  In this case, the blood occurred from ear trauma, causing bleeding to occur between the cartilage and the perichondrium—a tight layer of tissue covering the cartilage.  This causes a mass per se, and on the ear it is quite visible.  All of this lies deep to the skin.  The mass effect doesn’t go away by itself.  Later, the hematoma “organizes, meaning the blood cells break down, and what remains is the serum, or liquid that transports blood cells through the body.  When this occurs, the mass becomes a seroma.

This phenomenon often occurs in wrestlers, where the ear is grabbed during a wrestling bout.  This is the reason wrestlers should wear ear protection.  I’ve also seen it in mixed martial arts fighters who, like a lot of guys in general, leave it untreated and thus creating the Cauliflower look.  Patient 2 below is a guy whose ear was grabbed during a jiu-jitsu match.
As it so happens, this particular patient wrestled in high school years ago and had this same problem back then, only at that time the hematoma was much smaller, such that a doctor or coach or his Uncle Ernie (he didn’t recall details) drained it by poking it with a needle and draining off the fluid (aspiration), doing this daily over a course of several days.  Eventually it resolved.  So, on this occasion he took it upon himself to purchase a box of sterile needles and treat it himself.  He admitted to draining a bunch of fluid but the darn mass recurred by the next day, even though he did the self-needing over several consecutive days.

With this type of problem, the tissue still secretes serous fluid once it is drained, filling up the space again.  Sometimes very small hematomas will heal and scar down such that the space is eliminated, but larger ones will fill back up with fluid unless external pressure is applied to flatten the space and allow the opposing tissue interfaces to bind to one another and seal, thus eliminating the space and preventing re-accumulation of fluid.

We typically perform an incision and drainage (I & D) and afterwards secure bolsters—soft pads that apply constant pressure on each side of the drained space—to prevent recurrence.

“Ooh!  How’s this done?”  I see you raising your hand with impatient curiosity.  So for you Do-It-Yourselfers, below is a short synopsis, for interest-sake only, and as always a warning: don’t DIY, even if you’re a medical professional.  Bad things invariable happen.  In other words, don’t be stupid and see a doctor.

1.  The doc must numb (locally anesthetize) the ear.  This requires injecting something like lidocaine behind the ear first to numb the nerves that innervate the ear from behind, and then over the top of the planned incision.  Usually epinephrine is added to the lidocaine to minimize bleeding when the incision is made.

2.  After cleaning and prepping the ear with a sterile cleanser, an incision is made paralleling the natural contours of a normal ear, usually in a slightly curved line (curvilinear fashion in surgeon’s jargon).  If this is done a week or more after the initial injury, a ton of amberish looking (serous) fluid pours out.  If this is done a few days after, then old blood and blood clots are often encountered.  Once all of the fluid or old blood 1s removed (evacuated), the ear’s appearance usually is much improved, and the more normal cartilaginous shape is then appreciated.

3.  The evacuated space is probed for any residual blood clots and sometimes irrigated with a sterile salt solution (normal saline).

4.  Bolsters are then sewn through the ear. 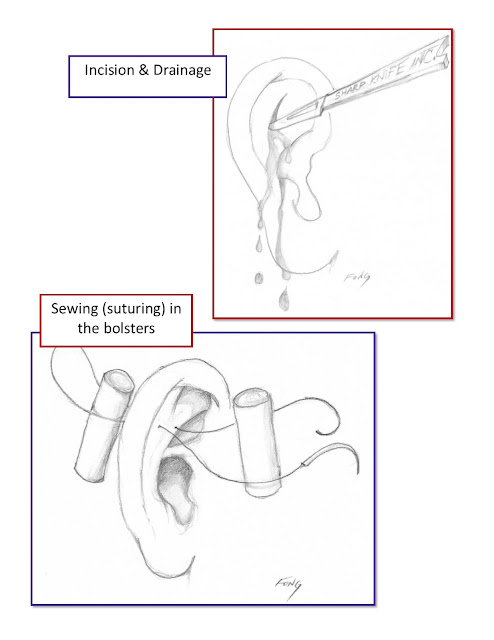 Yes, the sutures are placed through the skin, the underlying cartilage, and then out through the skin on the other side.  Bizarre, I know, but this works well.  A bolster is placed on each side in order to apply pressure from both sides, sort of like an ear sandwich so to speak.  The sutures are tied down rather tightly. There are other methods of applying pressure, such as plaster, firm bandaging, but this technique seems to work the best.  Often multiple bolsters are needed as demonstrated in this case.

5.  A week later, the sutures are cut and the bolsters removed. This provides ample time for the tissues of the ear to properly heal and begin scarring down.  The patient is instructed not to manipulate or tug on the ear for another 3-4 weeks to prevent recurrence: for Patient 1, no wake-boarding and for Patient 2, no ear-grabbing.

So there you have it.  Hope the curiosity is satisfied for those who were curious in the first place.  Again, no DIYs please, since we don’t want to see you hurting yourself, as if smashing your head against the water wasn’t bad enough.