Medical professionals love to use really big terms and this is especially true of ENT doctors.  So whenever a patient comes in and needs a special exam using a fiberoptic scope, we proudly announce that, “Yessiree, you’re gonna need a nasopharyngoscopy!”  Sound fun?  Aw, come on!  That’s a 17-letter word!

Actually, this procedure is not as hideous as it seems, as demonstrated by the person in the picture who is having the time of her life…well, that’s a stretch, but she’s sporting a delightful smile and not screaming and kicking about.  By the way, that’s my wife and she’s not a patient, so I’m not violating any privacy issues here.  And she didn’t slug me at the end.

For patients presenting with throat or voice problems, the ENT doc first dons a headlight, grabs your tongue with a piece of gauze and places a round dental mirror way in the back of your throat to visualize further down, all for the purpose of viewing the larynx or voice box, as well as the part of the throat around the larynx, including the back of the tongue and the hypopharynx, which is the entryway into your esophagus.  The mirror can also be flipped upwards to view the back of the nose called the nasopharynx.  Yet in many instances a good view of these structures is inadequate by such means and more specialized tools are needed.  Your ENT doc will then resort to this gnarly looking piece of equipment with a long, flexible tube that lights up at one end, and has a lever with an eyepiece at the other.

This is a fiberoptic scope or more specifically a nasopharyngoscope.  The procedure has a variety of names such as fiberoptic laryngoscopy or nasopharyngoscopy or flexible fiberoptic endoscopic exam, etc, but the gist of this is a tube is placed through your nose and down into your throat.  The device has a long fiberoptic cable within the shaft of the tube as a means of delivering the light from its source at the other end.  Another fiberoptic brings the image to the eye piece where it is magnified.  The scope also has a device that allows the doc to move its tip, allowing for easier passage as well as for maneuvering to see adjacent areas outside the scope’s field of view.

Whenever we must do this procedure, I often tell patients it sounds and looks more hideous than it actually feels, and most people tolerate this quite well.  It usually takes just about a minute to do a good exam.  We also do this in young children with vocal or throat problems.

This procedure is done through the nose and not the mouth, contrary to conventional wisdom.  The nasal approach is actually much more comfortable, as it bypasses the gag reflex which is generally strong on the back of the tongue, the soft palate and over the tonsils.

First a nasal decongestant is sprayed into the nose on each side, namely neosynephrine or oxymetazalone, which are over the counter medications one can purchase at most any grocery store.  The purpose of this medication is to decongest the soft tissue inside the nose, or shrink those tissues down which improves the ability to pass the scope through the nose with less effort.  Next, an anesthetizing solution is sprayed into the nose.  This is often topical lidocaine.  You will also notice the spray dripping down your throat and typically doesn’t taste all that great and your throat might become temporarily numb, but this is expected so don’t worry.   Some practitioner’s use cocaine…yes the same cocaine that people snort, but his is a very dilute solution and unfortunately won’t make you high.  Cocaine has medicinal properties, as it decongests tissue and anesthetizes it, and many of us use it during nasal and sinus surgery…legally. 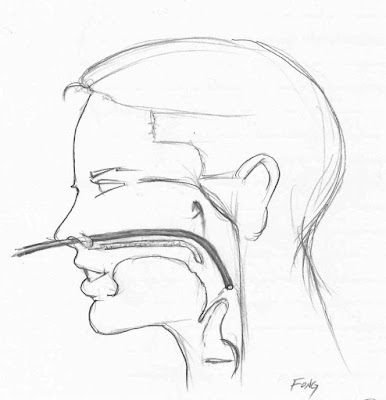 After about a minute or two the doc will then place the scope in one nostril inspect it and often will inspect the other one as well.  This gives a view of the structures inside the nose.  Having determined which side appears more patent and easier to pass the scope (and yes, each side of the nose is not an exact mirror image of the other and, as with most things, we humans have a wonderful asymmetry throughout).  The scope is then gradually passed further into the nose, nearly parallel to the floor and not up into the head as some patients intuitively think it will go.  The doc then flexes the scope tip so it can be guided downward behind your soft palate and uvula, and then a good view of the stuff that needs to be seen is seen.  Since the scope is flexible, the doc can avoid bumping into structures and also look into more obscure and narrower areas.

Your doc may then have you see something like “eeee” or “aaaa” which actual serves a purpose and not merely to humor your physician.  When you use your voice in this manner, the vocal cords of your larynx come together (or adduct in medical jargon) which allows the examiner to assess movement of the cords and better visualize for subtler lesions.  The tissue around the larynx area also is examined.  In addition, either on the way down or on the way out, your doc can also visualize the nasopharynx, eustachian tubes and the rest of the nasal cavity.

After it’s over, patients often ask whether I need to look at the other side.  I explain that once the scope is farther back into the nasopharynx, the nasal septum (the partition or wall that divides the nose into left and right sides) ends and does not travel all the way to the back of the nasopharynx, and so the larynx and throat are actually viewed in a midline position of the scope, and a good view of the left and right sides of the nasopharynx is easily achieved merely by flexing or bending the tip of the scope to view those areas.

A cautionary note for some patients:  Afterwards your throat may feel strange and numb for up to an hour.  I advise not drinking any hot food or beverages or spicy foods for about an hour due to the numbness.  Since throat sensation is diminished, you won’t experience the same sensations you typically have with normal swallowing, and as such a few people have felt they either can’t swallow or they become a bit concerned by the odd sensation.  This will pass.   I typically warn patients who seem to have a tendency for anxiety that sometimes they may feel a bit panicky when the throat gets numb, at times causing a globus sensation (a foreign body or “lump” sensation in the throat) or they feel as if their throat is closing off, but it actually isn’t.  This sensation will eventually pass as the patient is reassured and starts to relax.  Since this is an office procedure using no sedation, you can drive and go about your normal activities with the dietary exceptions above.

So, if you have an appointment with your ENT doc in the near future and you’re anxious about the possibility of having a nasopharyngoscopy done, rest assured this is pretty mild compared to a lot of things that can occur in doctors’ offices, such as shots, blood draws, or a rectal exam.