The parotid gland produces saliva, that juicy substance that makes your mouth water when you're about to bite into a savory double bacon cheeseburger (or for you vegans out there, a juicy portabella, roasted poblano pepper and tomato burger, slathered with refried black beans and grilled onions--as a devoted carnivore, I found this surprisingly satisfying) and is one of the three major salivary glands found in the face and neck. Surgery on the parotid gland is often done for tumors.  Most tumors (neoplasms) of the parotid gland are benign (non life-threatening); approximately 80% are benign leaving a 20% chance of malignant tumors.  One of the most common benign tumors—called a pleomorphic adenoma or benign mixed tumor—however, carries a small risk of converting to a malignant tumor later if it is not removed.

Usually a needle biopsy is done, if possible, to render a diagnosis.  Benign tumors often are removed since they can become quite disfiguring if left to grow, and removal may be more difficult the larger they become.  The facial nerve is within the substance of the gland and divides into its various branches inside the gland.  A simple excision of a parotid mass is not possible without damaging or cutting the nerve.  Also, most tumors require removal of a sizeable amount of normal tissue around the tumor; otherwise small vestiges of tumor can be left behind and it can recur later down the line, and operating in a site that had prior surgery is more difficult.

Thus, if you have a parotid tumor and your doctor feels it needs to be removed, then the surgery is a parotidectomy with facial nerve dissection.

Oftentimes an explanation of the surgery goes a long way in preparing the patient for surgery and the postop after-effects.  This article provides a basic description of the surgical approach.

First of all, the surgical incision is placed in way that is has the most cosmetic after-appearance while providing wide exposure.  The often the Modified Blair incision is often used. 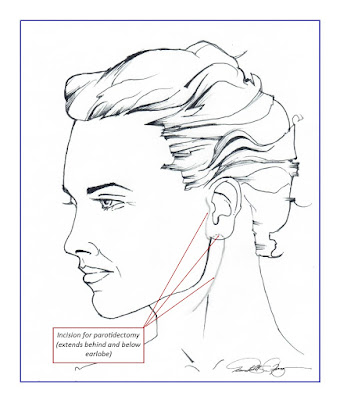 Next, a flap of skin and the fatty soft tissue beneath is elevated off the fascia or capsule of the gland and this is retracted forward (anteriorly).

Next, the dissection goes deeper, peeling the gland off the sternocleidomastoid muscle, the front part of the mastoid bone and the front part of the ear known as the tragal cartilage, and more gentler dissection is done to identify the facial nerve.  This nerve must be preserved in all cases, unless there is direct involvement with tumor (in such cases facial weakness is often present before surgery). The facial nerve is responsible for movement of the facial muscles on that side, including: raising the eyebrow (temporal branch); closing the eyelid (zygomatic branch); raising the upper lip and nasolabial fold, which is the fold of the skin from the edge of the nose that extends to the side of the corner of the lips (buccal branch); movement of the lower lip and chin (marginal mandibular branch); tightening the layer of platysma muscle along the side of the neck (cervical branch). 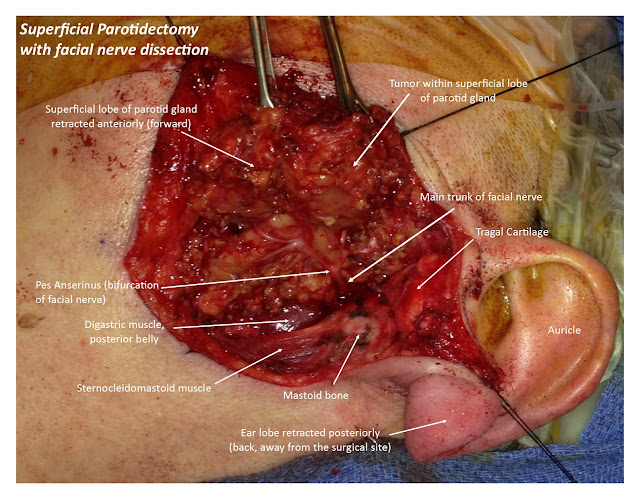 Afterwards a drain is placed, the wound is closed with absorbable sutures deep to the skin and removable sutures over it, and many-times a pressure dressing is applied over the surgical site. Dressing and drain is removed the following day in the majority of cases.

Pain needing prescription pain medications usually lasts for a week or less, and many patients have taken plain Tylenol instead.  The incision is kept dry.  I usually recommend placing an antibacterial ointment such as Neosporin, bacitracin or triple antibiotic ointment over the suture line before and after bathing or showering for the first week.  If removable sutures are placed, they are usually removed within seven days.