You’re minding your own business one day--eating salty snacks while watching football, drinking beer and eating pizza and pretzels while kibitzing with your friends and family--when all of a sudden after biting into some really tangy Buffalo wings, you find the right side of your face suddenly swells.  It swells so large and is so noticeable that even your perpetually drunken buddy Fred drops his half-eaten chili dog onto the nice fine rug your wife just purchased and points frantically at your face.  Fred being Fred of course doesn’t drop his can of beer, as you and your cadre value beer as the most precious commodity known to mankind, coming a close second to gold.  Your other buddy, who’s name completely alludes you, accidentally steps on the dog and smears the chili and in his shock and awe he spills some of his beer right onto his shirt.

Forcing your way through your inebriated buddies, you run to the bathroom (christened the “Powder Room” by your beloved wife) and find that indeed your face is the size of half a pumpkin.  You hear a scream.  You hurriedly return to the festivities only to find everyone has forgotten about your sad predicament as your poor wife is on her hands and knees frantically wiping and scrubbing the chili-stained carpet while uncharacteristically spewing forth a barrage of foul-letter words intermixed with repetitions of your name in a frenzied scream.  One of your pals nearly stomps on top of her as he jumps for joy when a touchdown is scored.  She sees you and gives you the most horrid look you’ve ever seen on a human face, while raising up her third finger (next to that precious wedding ring), pointing it in your direction.

“Life’s unfair,” you cry to yourself.  Then you recall you had a similar incident (that is, with the swelling in your face) not more than a few months back.  The swelling wasn’t exactly the same, was rather more painful, but you’d forgotten about it since, as with most things in life, time has a funny way of making you forget shocking, profound and even life-altering lessons.

Back then you had a swelling, but it was under your jaw.  At first it came and went, usually whenever you ate something tangy or sour.  Then one day it progressively ballooned, causing intense pain that brought you to your knees crying like a baby for help.

“I’ll bring you to the doctor,” she said, “If you stop crying like a baby,” and she dragged you by your ear to the car.

Your doc treats you with an antibiotic and a steroid to reduce the swelling, and also refers you to an Ear Nose and Throat specialist (otolaryngologist) who discovered you had blockage out of the salivary gland under your jaw, which happens to drain through a tiny duct that opens under your tongue.  The ENT guy found a stone lodged in the duct, reducing saliva flow and thus the reason your gland hurt like the dickens when you ate something that really stimulates saliva flow.  He dons a bright light on his head directing it into your mouth, and after probing the duct with these thin devices,  he incises over the the duct to open it wider and with a bit more poking and prodding while pushing on your gland to push more saliva out, the stone finally finds its way out of the duct and into your mouth, whereupon the doc immediately retrieves it and proudly shows it to you.

With an odd sense of humor not uncommon amongst ENT folk, and not a few beads of sweat populating his brow, he exclaimed proudly, “It’s a boy!”  He looks again in your mouth and while pressing on the gland in your neck, you feel saliva pouring out and he retrieves another stone.  Your ENT doc literally dances with joy with the second stone—he compares this blessed event to the delivery of twins.

You immediately feel better and the pain and swelling of the gland greatly declines as lots of thick saliva and foul-tasting pus pours forth from the gland through the free-flowing duct.  He gives you instructions to massage the gland a few times a day, drink plenty of water to stay well hydrated, eat sour candy or sour drinks or foods to stimulate saliva production, all to allow the saliva to flow from the gland and prevent recurrence of this problem.  He instructed you to do this regularly even if you had not problems.

Only you had forgotten about the instructions.  Isn’t beer similar to water anyway, providing proper hydration?

You then have an immense revelation.  Your ENT doctor is right here at your football party!  In fact, he’s the guy who stepped on the chili dog, triggering the ear-curdling scream from your beloved spouse, prompting her announcement that she’s filing for divorce if you don’t straighten your act.

The ENT doc firmly massages your face amongst the collective shock of your other pals.  Explaining he is happily married and not getting fresh with you, he drags you back to that powder room and forces you to drink water right from the faucet while he returns to your fridge and grabs another beer.  For some reason, the half dozen friends you’ve invited are also crowded into the tiny powder room watching as miraculously the swelling starts to resolve as you sense an odd salty taste inside the right side of your mouth.

You’re once again a happy camper and return back to the game, knowing later the day of reckoning with the love of your life (i.e., your upset spouse) is soon to come.

The first incident with the swelling below the jaw was the result of a phenomenon known as sialolithiasis, a condition where stones form in the saliva.

There are three major salivary glands on each side of your face and jaw, as the picture above depicts. These are the parotid gland, submandibular gland and sublingual gland.  You also have numerous much smaller glands called the minor salivary glands that are dispersed all throughout your mouth, lips and throat, lying beneath the pink mucosa that lines these structures.  The sublingual gland has several microscopic pores that drain into the floor of your mouth.

However, the parotid and submandibular glands are larger and have only a single duct that drains each gland.  The parotid empties into the mouth through Stensen’s Duct, located opposite your upper second molar on the buccal mucosa (the smooth pink tissue on the side of your mouth, deep to your cheek).  The submandibular gland drains via Wharton’s Duct, a tiny opening located within small raised bumps of tissue on the floor of your mouth, one on each side of your lingual frenulum—a band of tissue or a subtle pale line that runs from the floor of mouth and continues on the undersurface (ventral surface) of the tongue.  You may have heard the term ‘tongue-tied.”  In this condition, the frenulum is a more prominent tissue band that can restrict movement of the tongue.  When this condition occurs in newborns, it can cause feeding difficulties, in which case the frenulum is cut or incised by your friendly ENT doc; another topic for another day. 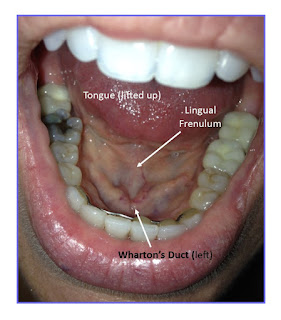 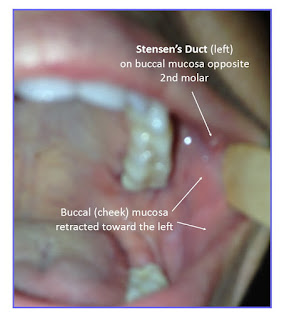 With only one source of drainage from either the parotid or submandibular gland, you can imagine any blockage of flow can lead to big-time problems.  If flow is disrupted, saliva is trapped, builds up within the gland causing it to swell up and increase in size, a condition known as sialoadenitis.  This often is very painful.  If the saliva continues to remain trapped, the gland becomes more inflamed and bacteria then proliferate causing an infection, leading to nasty stuff such as fevers, increased pain, and overall feeling downright miserable.  As the inflammation and infection progress, pus develops, sometimes draining from the duct it if there is some space around the obstruction to do so, but if not, the infection can progress and spread outside of the gland into other parts of the face and neck, sometimes forming an abscess.

Obviously, blockage of saliva flow is undesirable.  How does this occur?  With the second situation with sudden onset swelling and subsequent resolution, a mucous plug likely formed in the Stensen’s Duct, causing your parotid gland (located on the side of your face) swell like a melon.  Saliva is comprised of mucous along with thinner, less viscous liquid knows as serous fluid.  However in cases of dehydration, where you’re not drinking enough water (and eating a bunch of salty foods with little water intake increases this risk), the mucous becomes more prevalent, makes the saliva thicker, and if allowed to gather in the duct can form a plug.  This obstructs the duct and unless the plug is forced by saliva dammed up behind it, inflammation and infection can occur.

In the first situation, a salivary stone formed on Wharton’s Duct, causing the submandibular gland to swell. This too occurs in states of dehydration, leading to salivary stasis, where the saliva sits rather than flows out of the duct.  Since saliva contains minerals such as calcium, if left to sit, calcium crystals can form, gradually increasing in size as more calcium salts accumulate, forming a stone.  The stone gets larger and larger and can partially or fully obstruct saliva flow from the duct.

Treatment mainly involves removing the obstruction.  With a mucous plug, increasing saliva flow by drinking more water, massaging the gland that’s involved and applying warm compresses to it can aid in increasing flow and pushing the plug out.  Sometimes the doc can dilate the duct with small probes—this widens the diameter to improve ductal outflow.  Likewise with a stone, these measures can aid in forcing saliva flow around the stone and, if small enough, forces the stone out.  With larger stones however, other measures such as incising the duct and retrieving the stone may be needed.  If located to far from the ductal opening or if the stone is within the part of the duct that is inside the gland, the salivary gland itself may need to be removed.

The best measures to prevent this from recurring, is to drink plenty of fluids like water or electrolyte drinks (and not beer, alcohol or caffeinated beverages, which can lead to diuresis and increase your risk of dehydration).  The full gamut includes:

2.  Massage the gland three times a day or more, with firm pressure from front to back to move saliva out of the gland.

3.  Sour candy (or sour sugarless candy if you are diabetic) 3-4 times a day, such as Lemon Drops or Skittles.

5.  Anti-inflammatory medication such as ibuprofen (ie, Motrin, Advil) or naproxen (ie, Aleve) as needed for pain or discomfort.  Alternatively, you may take these daily for 1-2 weeks to alleviate any inflammation within the gland.  Don’t take these if you have had problems with these in the past, or if you have stomach ulcers or bleeding problems or are on blood thinners.

These measures often help to reduce or prevent the recurrences of sialoadenitis and measures 1 through 4 should be done daily, even when not having any symptoms whatsoever.

So there’s the lesson on salivary duct problems and salivary stones.  The other vital lesson: whenever you invite your ENT doc to a party, keep a headlight available and the beer plentiful.