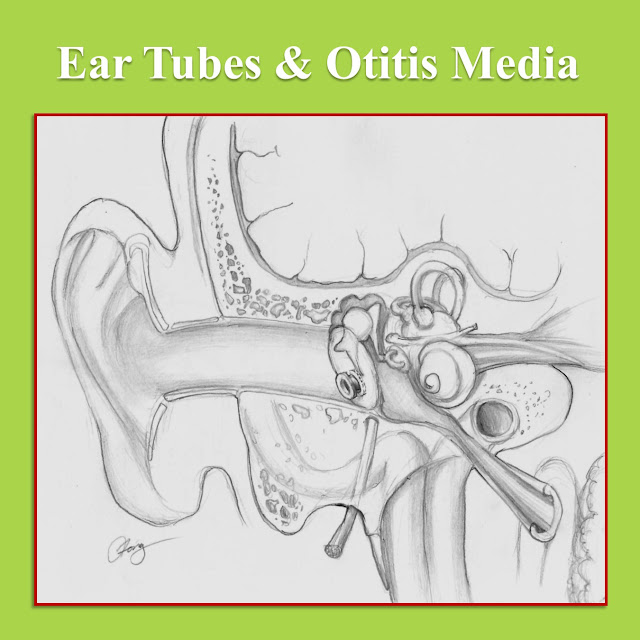 So what are ear tubes and why are they placed?  This is a common question since this procedure happens to be one of the most common procedures we Ear, Nose & Throat (ENT) doctors perform, most often in children.  The indications for “tubes”—the common name for this procedure—are recurrent or chronic otitis media.  So what is otitis media?  To the layperson this is an “ear infection,” for ENTs and other doctors, otitis media is a specific type of infection, one localized to the eardrum and the space behind the ear drum called the middle ear.

The middle ear drains into the back of the nose through the eustachian tube (ET).  This tube is immature and collapses easily in children, particularly those under four years of age. This is the reason otitis media is more common in young children.  The ET serves to equalize the pressure on the other in the middle ear.  When the ET does not open properly, the air in the middle ear gets absorbed, creating negative pressure (much like a vacuum), which in turn pulls fluid from the mucosa—the tissue lining the middle ear.  This fluid then gets trapped behind the ear drum. 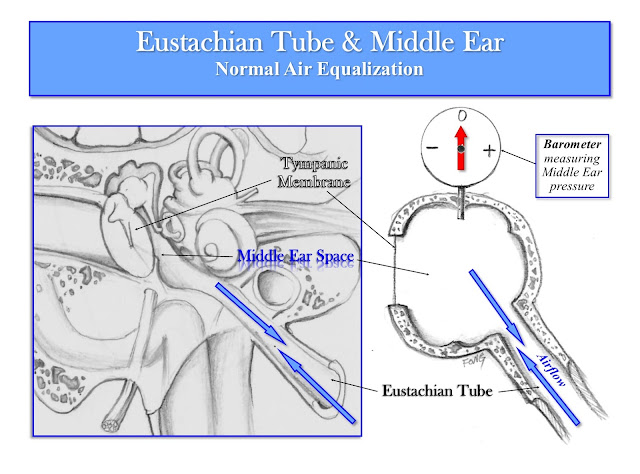 If young children were able to describe verbally what they’re experiencing, they may very well say something such as, “Hey Mom, hey Dad, my ears are plugged and I can’t hear well.  So if you’re yelling at me to get my attention, or trying to call me away from my super-fun activity of stuffing green beans up my nose, well I simply can’t hear a thing you’re saying.”  Instead, the child may tug at the ears, not pay attention to you at all, or oftentimes exhibit no symptoms whatsoever.  We call this chronic otitis media with effusion.    This problem typically causes hearing loss and is often painless.  Also, parents may find the child is delayed in speech or is not pronouncing words correctly.  In order for young children to develop speech and language skills, they first must have normal or consistent hearing to hear words in order to express them verbally.

However, that trapped fluid can also provide a milieu (fancy term meaning “social environment”) for bacteria, those little microscopic guys that normally live in many places in the body, but can divide and grow to the point of overpopulation, making too much merrymaking in the middle ear.  The fluid can then turn into pus (a by-product of those partying bacteria), causing redness and inflammation of the ear drum which causes pain in the child.  This is called acute purulent (or suppurative) otitis media. Often this is simply referred to simply as acute otitis media.  Of course, you won’t hear clear expressions from your child such as, “Man oh man, my d--n ear hurts like hell!  You guys gotta give me something for this, like that candy-flavored ibuprofen!”  Rather the child will exhibit symptoms such as fussiness, fevers, ear pulling, not sleeping or eating well, or inconsolable crying.  This is when your doctor often prescribes an antibiotic, which kills the bacteria.  Eventually when the ET opens up again, it drains the middle ear of the pus and fluid. 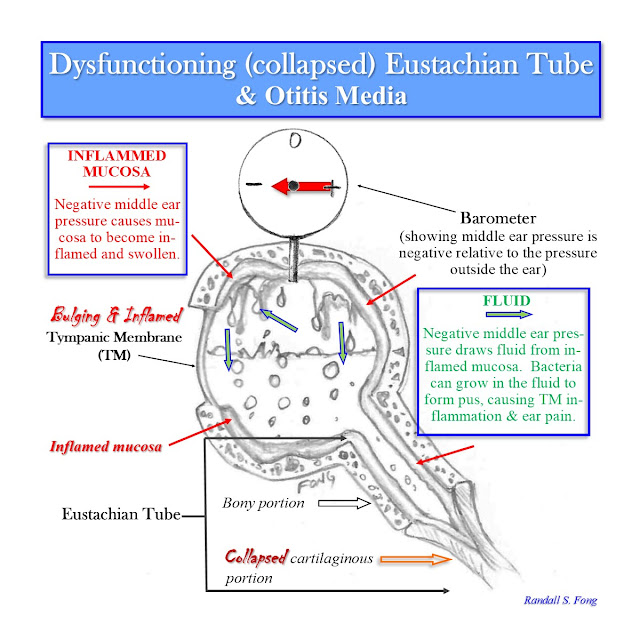 However since the ET is dysfunctional, it tends to open but then close for long periods of time in kids, which can then lead to multiple episodes of ear infections or recurrent acute otitis media.

To get a better grasp of how the ET functions, see Eustachian Tube Part I.
The function of tubes:
The full name of the procedure is myringotomy and tubes, where a myringotomy is a small incision in the ear drum which allows for the placement of the tube.  This is done for both the chronic and recurrent forms of otitis media.  You may ask, “So doc, why not do the myringotomy alone?  That should allow any fluid to drain and allow the middle ear to re-ventilate itself. So why place the tube?  So you can charge more for the procedure?”

To which I’d reply, “Uh, no, but the thought crossed my mind (joking of course). “ 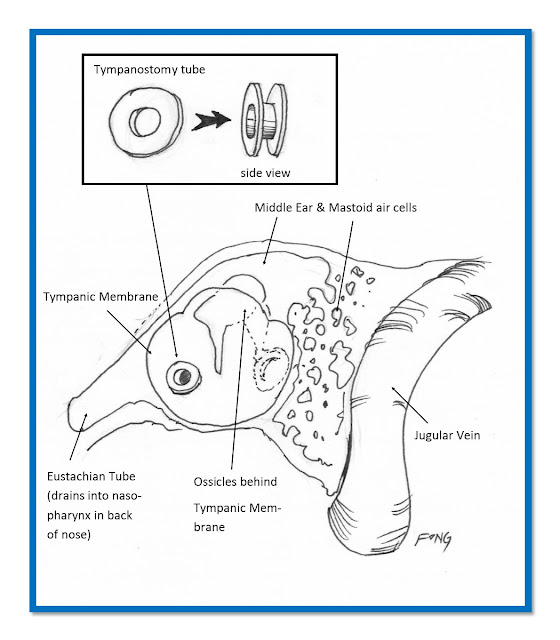 The problem is the eardrum heals very fast.  Usually within a week the incision (myringotomy) has healed and closed.  This often does not allow the middle ear to fully heal, to allow the ET to reopen or to mature, and the middle ear fluid will re-accumulate. The tube keeps the opening across the eardrum intact for about 8-12 months when the tube eventually is pushed out from the eardrum. 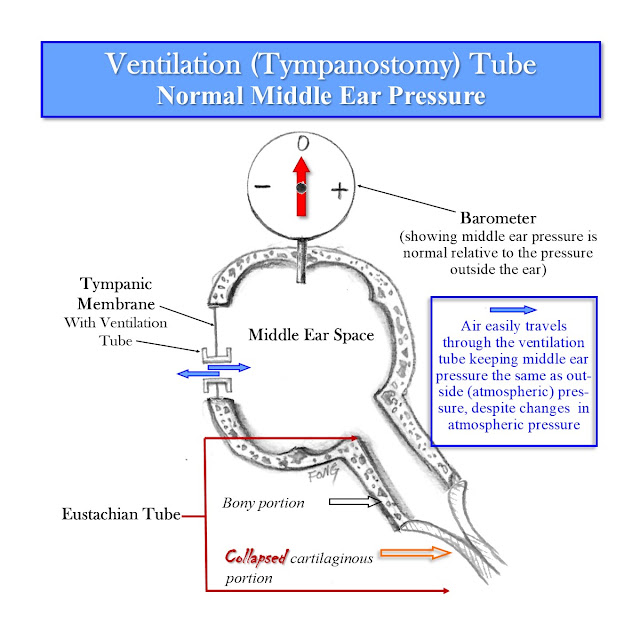 We view a PE tube as a temporary measure that buys time to allow the child’s ET to mature and grow.  In the meantime, the child has no or fewer ear infections.  If an infection does occur with a tube, usually you’ll see gross looking greenish or yellowish fluid coming out of the ear.  Often pain is not experienced since the pus is not allowed to build up in the middle ear to cause ear pain.  And when this occurs, treatment is often simpler—we can prescribe antibiotic ear drops that go directly into the ear, through the tube and straight to the target middle ear, avoiding the use an oral antibiotic by mouth, which needs to go through the child’s entire system to get to the target.  Thus there are less potential side effects using the ear drops, and less tendency to develop antibiotic resistance.
Thus, in a nutshell a brief and hopefully helpful description of tubes and otitis media.