Diet and Exercise: The Keys to A Balanced and Happy Life 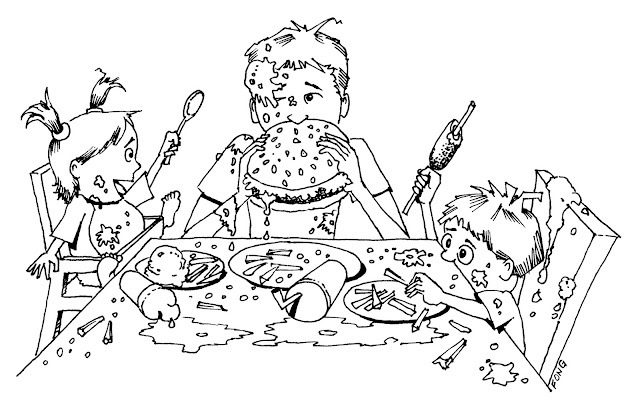 Let’s start with the topic of food.  I love food.  I’ve always loved to eat, even as a young kid.  Right next to running and writing, it’s my favorite pastime.  As a kid, I remember adults commenting on how much I ate.  Watching me as I consumed food, they’d say something like, “Geese, that kid sure can eat!  Look at him!  He’s still going!  And he’s thin as a bone!”

As I write about food, much of this may sound contradictory to current guidelines on proper eating, but as with many things--diet and nutrition are no exception—the gospel frequently changes.  As I’m no authority on this subject, I won’t delve much into the current recommendations only to say that today’s dogma may be different tomorrow.

The mere talk of food overtakes my better rational nature—if indeed such a nature exists—causing this delightful subject to lead a life of its own.  The topic of food is so pleasurable that merely writing about it makes me giddy with hunger.  So if the writing becomes choppy or the ideas seem disconnected, it’s because I’ve left the keyboard and headed for the refrigerator.

I was a rather skinny lad when I graduated high school, weighing 129 pounds at a height of 5 feet and 11 inches.  I still ate huge quantities of food, but as I was running so much in high school for cross country and track I was burning calories faster than I could cram them into my face.  In fact, years later when my kids saw my cross-country pictures in my high school yearbook they nearly freaked out.  “Gee Dad!  You look like a skeleton!” one child remarked.  “Yeah, like one of those starving people in Africa!” the other added.  Kids.

However, as I got busy with college and a part-time job, my level of exercise precipitously went down the toilet though my passion for eating did not.  My weight crept up and to make a long story short, after I finished medical school, got married and started a family, I acquired a larger waist, a pair of “love handles” which weren’t getting a whole lot of love, and a few extra—say 45—pounds of weight.  I was over 175 pounds at the same height of 5’ 11”.

At the ripe age of 42, I decided to run a half-marathon and then later a full marathon.  My weight eventually declined to a range of 155 to 160 pounds, and it’s remained at those levels since.  The key is I continue to run on a regular basis such that it became a habit.  Though not the same as the High School 129, my weight is still optimal; I’ve added some muscle and some fat to a frame formerly comprised of little more than skin and bones and a couple muscle fibers.  I started weight-lifting shortly after high school putting on the muscle mass, and that too has become a habit.  Yet my eating habits have not changed much.  I still eat like a pig.

So let’s diverge a little and discuss exercise.  I’ll talk about running since it’s familiar to most folks and is relatively easy to do, compared to most other forms of exercise  Studies have shown that a runner burns on average of 100 calories per mile when running at a relaxed pace.  This however doesn’t take into account one’s body weight.  The heavier you are, the more calories you will burn per mile.  It’s simple physics--the greater the mass, the greater the force required to move that mass a given distance, which requires more energy.  For the human body, expended energy is measured in calories.  A rough calculation is to multiply your weight in pounds by 0.75.  This is a rough estimate of the number of calories you will burn per mile of running.  So if you weigh say 160 pounds, multiply 160 by 0.75 (or ¾ths of of160) which equals 120; this is the number of calories a 160-pound person expends per mile running.

So you see, running consumes a lot of calories.  And if you’re accumulating quite a bit of weekly miles running, you need to eat more just to keep up with the demands the exercise places upon you.  This is great news!  Carbohydrates—sugar, starch, cookies and candy--are actually good for distance runners (perhaps a contrarian point of view).  Even fat is good and lots of protein.  At the risk of offending the health and dietary professions, think of a nice juicy bacon cheeseburger with a large milkshake and French fries and well…you get the picture of an energy-replenishing meal satisfying the needs of the energy-spent runner.  Life is good.

Sorry to sound contrarian about food, but one of the reasons I love running and exercising is so I can eat to my heart’s content.  No doubt, much of this screams blasphemy to trained nutritionists, perhaps woefully so.  Don’t take this as advice tailored specifically for you or as the gospel truth.  However, I don’t eat in a terribly porcine manner every day; most days I eat rather sensibly.

For some reason, after I resumed regular running in my 40s, food seems to taste better.  Astonishingly, things such as fresh fruit, vegetables, even water from the kitchen faucet (i.e., natural, non-processed foods straight from the source) were appealing.  When I was a kid, I didn’t care for that kind of stuff and even had a general dislike for them, although Mom was diligent in preparing fresh food and rarely let us eat junk.  At that age, who listens to Mom anyway?   By the time I was in college, medical school, and especially during my residency, there was little time to prepare let alone shop for fresh food.  Time was of the essence, and much of what I ate was packaged, processed, and preserved.  In those days it was more important to fuel the body for a hugely busy day rather than nourish it for the long term.

So it came to my surprise that I actually enjoyed foods I despised when I was younger.  This dawned upon me one day while eating a carrot—a carrot of all things!—and I realized I had accepted healthier eating habits; this was not forced upon me but developed rather from a natural evolution, so to speak.  There’s something satisfying about eating both for enjoyment and for the body’s physiologic needs.  It’s just so darn—and here I go again—pleasurable.

Yet there are times when you simply must throw caution to the wind, toss good sense out the window and devour something really heavy, fatty, sugar-saturated and just darn tasty.  Strict abstinence from something never works, and that’s why fad diets often fail.  Indulgence yourself on a regular, although not-too-frequent, basis.

I was--and always will be--a carnivore.  I make no apologies for this.  I do eat different fruits and vegetables every day, and I’ve gone an entire day without eating meat.  But I simply cannot dispense entirely of juicy burgers or a very thick, rare piece of steak, especially ones I’ve cooked myself.  I also love all types of fish, whether raw or cooked.  Sushi is one of my favorite foods.  So are cheeseburgers piled with lettuce, tomatoes and onions.  I also love to slow-cook food in a smoker such as pork ribs, chicken, salmon and tri-tip roasts.  Thus sadly--or perhaps not so sadly--I can’t avoid eating dead animals altogether.  There’s a reason humans are on a certain link of the food chain (though not the top of the chain—think of viruses and bacteria being at the top) and I’ve accept our position on that chain unquestionably and continue enjoying eating animal products, no matter how disturbing that may sound.  It’s all about balance and the circle of life on this planet, so it was said in the Disney movie, The Lion King.

My philosophy on food, both from the perspective of a medical doctor and pseudo-athlete, centers upon the age-old dictum of balance.  A balanced diet contains the major food groups of: whole grains; a variety of colorful vegetables and fruits; and protein sources such as nuts, meat, poultry, fish, dairy and eggs.  Imagine living on a farm or a fishing village and eating only the things the land and sea have to offer.  Those people seem well-adjusted and happy.  The fresher the better, with avoidance—as much as possible--of packaged, canned and processed foods.  This--to my simple-minded way of thinking--is a sensible way of eating.

Of course, eating sensibly is easier said than done, which is why I can’t advocate strict avoidance of junk food.  Strict avoidance of anything only leads to failure.  In the realm of structured diets, once weakness sets in and a diet taboo is broken, the dieter perceives failure, and subsequently abandons the diet completely.  A small break in the diet—such as eating a small piece of candy or a gallon of ice cream—can be the tipping point that convinces the dieter that all hope is lost, dooming him to everlasting dieters’ hell.  That’s why fad diets don’t have staying power--there are too many rules to follow.

Balance also applies to exercise, no matter what method you choose.  I talk about running due to its simple nature and it’s a familiar topic to me.  Virtually anyone can run.  It takes no inborn talent or elaborate practice to get you there.  It requires nothing more than putting one foot in front of the other.  Find a way to do it regularly and you will surprise yourself by its affects.  You also will find that eating and exercise complement one another in a very pleasing fashion.

A note on failure:
Factor the possibility of failure into your plan when striving to do anything good such as eating healthier or exercising.  Failure will inevitably raise its ugly head, but it’s not what it does to you that matters, it’s what you do to it.  And when you eventually do stuff your face with a hefty piece of junk food or decide not to exercise that day, don’t allow guilt to force you into giving up entirely.  This lapse in judgment—this failure—is temporary.  Learn from it.  The world will not end.  There is always another day.  Accept failure as a natural part of being human.

So there it is--my philosophy in a nutshell.  Simple enough.  Or the philosophy from a nut, however you choose to digest it.  No doubt, many will argue the merits of all or part of this post, but arguments will change as time passes and science showers us with new information and new sets of recommendations on the way we should eat and exercise.  Controversy will always exist even in light of the best available information.  As always, keep it simple, use your common sense, and you will find the way to a balanced and healthy lifestyle.