Tongue Lumps and Bumps and Other Interesting Tongue-Twisters 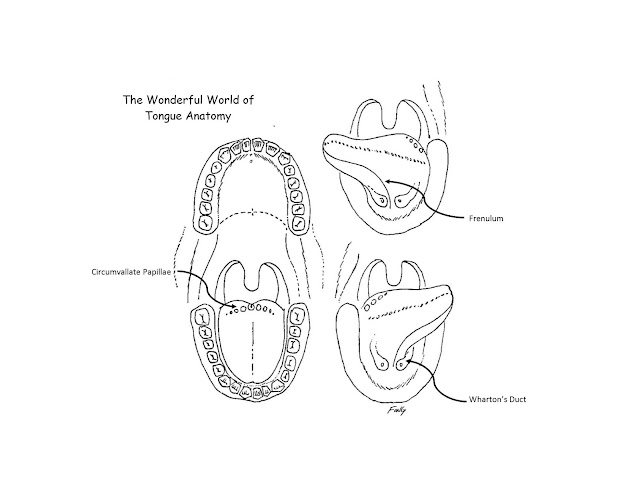 The tongue is a rather peculiar piece of tissue, when you really contemplate it, particularly compared to other organs in the body.  The shape of the eye and ear makes logical sense to capture all that visual and auditory stimuli around you; the stomach is designed like a bag to hold all that tasty food and beer you’ve engorged; and the lungs act as thin bellows pumping air in and out.  The architecture of these organs makes sense.  So what’s with the tongue?  Is there a rhyme and reason for its design or is this another example of God’s sense of humor?

Speaking of which, many ENT doctors exercise a disturbingly warped sense of humor, having to do with a certain eccentricity that makes us either endearing or downright scary to our patients.  I’m not entirely immune to this phenomenon, so I was told.  I’ve had little kids cry at the first site of me while others talk to me like I was their best friend.   So when it comes to amusing aspects of the tongue, I tend to bite my own when patients present after discovering certain tongue-findings that are normal but send them through the roof, colloquially speaking.  Sometimes these are bona fide findings of concern; other times these are normal structures they’ve not noticed before.  Following are several of the features of the tongue that are actually normal anatomical features.

As such, this is not meant to be an exhaustive source of tongue anatomy and abnormalities, but as a concise bit of information.  As always if you have doubts, please see hour doctor.  And please don’t send me or another doctor a “selfie” of your tongue since that would be--politely speaking--just plain weird.

Circumvallate papillae
If you happen to stick your tongue way out and look deep towards your throat, you may notice several raised, pink bumps far back on the tongue.  Fear not for these are normal structures that dot the back-side of the tongue named the circumvallate papillae (“papilla” is one of these bumps; “papillae” = more than one).  They form a boundary of what we docs call the “base of the tongue.”  I’ve had a few people present in a panic—a few doctors included—when they happened to notice these guys in the mirror, fearing the worse: an unnatural growth or tumor, or perhaps a communicable disease they acquired from a long-lost flame whom they later discovered wasn’t as innocent or chaste as they were lead to believe.  For the most part be reassured that--in Arnold Schwarzenegger-like fashion--“it’s not a too-mah.”  These usually go unnoticed since not many people painstakingly look deep into their mouths in the mirror.

Wharton’s ducts
If you look towards the bottom of the tongue, or the ventral part of the tongue as we docs call it, you’ll see a few interesting features.  Two of these guys are small pumps on each side of the frenulum (see below).   Not to fear these two little dudes since they’re the openings to “Wharton’s ducts.”  A duct is simply a tube which, in this case, connects the submandibular gland (the gland below your jaw on each side that secretes saliva—ie, “spit”) to the floor of the mouth where you’ll see those little bumps.  These are the ONLY exits of saliva for those glands, so do us all a favor and don’t allow yourself or someone else to cut these little guys out, unless of course a trained professional sees something that’s abnormal—i.e., “not supposed to be there.”

Frenulum
This is the thin line of tissue travelling right down the middle on of the underside of the tongue.  Sometimes this is an actual band of tissue.  The frenulum can be prominent in infants, sometimes tethering the tongue and restricting its movement.  This can cause problems with feeding.  If this is the case, the frenulum can be incised (fancy doctor word for “cut”) to release the tethering affect and allowing for more normal feeding and suckling.  As you may imagine, a prominent frenulum also can cause problems with speech, since you need a mobile tongue for talking, and incising it for this reason is also a good indication, though increasing someone’s ability to talk may not be entirely desirable for certain folks.

Checking your mouth and throat on a regular basis is actually a good thing and knowledge of some of the main features of the anatomy is helpful.  Of course, if you see something that’s concerning or you have any doubts or you’re really freaking out, don’t hesitate to see your doctor or dentist for a proper evaluation.  An ounce of prevention is worth a ton of gold, as someone wiser than me said.