Adenoids: What Are They? Where Are They? 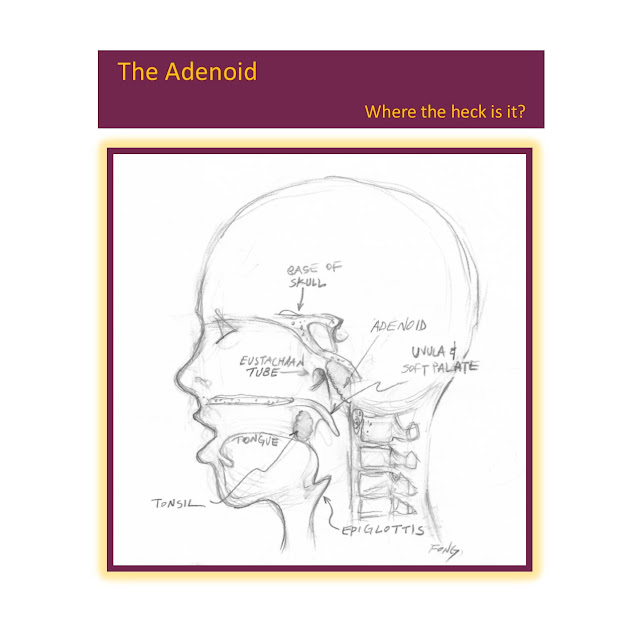 “Hey, my doc says I need a T&A.”
“What?  You need T&A?  He actually said that?  Is he a pervert?”
“No, no!  It’s a Tonsillectomy and Adenoidectomy.  I need my tonsils and adenoids removed.”
“Oh.  I thought you and he were a couple of crude males.  By the way, what are adenoids and where are they?”

Good question and a common one at that.  Tonsils and adenoids are lymphatic tissues that are part of your body’s defenses, the immune system.  They secrete antibodies that fight foreign invaders like bacteria and viruses and the like.  They’re more important during early childhood, and as one ages, they become rather unnecessary as the rest of the immune system takes over.

Tonsils are those things in the back of the throat, one on each side.  Most folks are familiar with these guys since they’re visible in most people.  As for the adenoids however, these reside way in the back of the nose, above the soft palate and that dangling thing in the middle called a uvula.  The adenoid is a single, midline mass of tissue; thus, we have just one adenoid, so to speak. The drawing at top shows a side, cut-out view (sagittal view in technical lingo).  Thus, they’re hidden from view.

So how do you assess adenoids?  Most doctors cannot see the adenoids.  On occasion, one may see the bottom edge way behind the uvula.  An ENT doctor can sometimes visualize these with a dental mirror (Figure 1), providing there is adequate space and the patient doesn’t gag and barf all over the poor doc.

They can be visualized using a fiberoptic scope through the nose.  Most teenagers and adults tolerate this quite well, but for young kids…there’d be a whole lot of kicking and screaming.

One of the easiest methods is a single x-ray taken from the side of the head.  The adenoid and its size are easily assessed (Figure 2).

Later, at another posting, we’ll get into the indications for removing the adenoids, but this should serve as a primer on some rudimentary anatomy.