Adenoid Removal (Adenoidectomy): The "How" for the Inquisitive Layperson 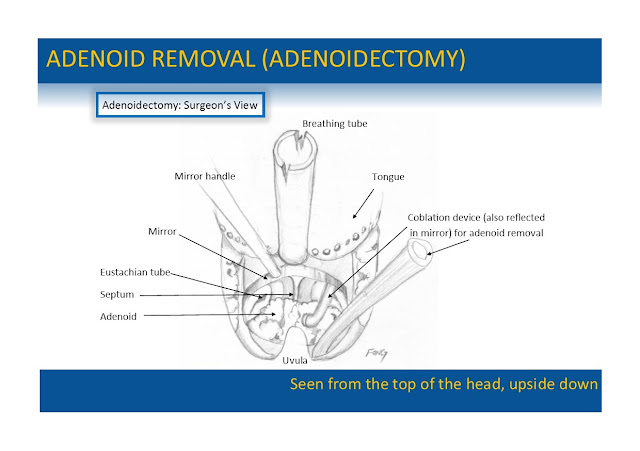 Warning: Do not attempt this at home

On previous posts we discussed the location and indications for removing the adenoids.  For this entry we’ll discuss the technique for adenoid removal for those whose burning curiosity is preventing them from sleeping.

Often a procedure done in children, an adenoidectomy (note: “-ectomy = “removal” in medical terms) typically is a relatively short surgery.

First of all, this is done under general anesthesia, which means the child is completely asleep.  An anesthesia provider places a breathing tube to delivery anesthesia gases and oxygen, and this tube also serves to protect the airway during the surgery.  The tube could be an endotracheal tube (which passes through the vocal cords of the larynx and into the trachea—or windpipe) or a laryngeal mask, which is a tube covered with a soft inflatable device that covers the top of the larynx rather than passing through it.  In either situation, your child is asleep before this is done.  I’ll refer to either device as a “breathing tube.”

Once the child is safely under anesthesia and the airway is secure, the surgeon opens the child’s mouth with a retraction device that pushes the tongue and breathing tube down, inserts a soft catheter into the nose, pulling it through the mouth in order to elevated the soft palate and uvula.  This improves the view of the adenoids which are visualized with a mirror held by the surgeon.  By the way, I (and most surgeons) sit above the patient’s head, such that the mouth and throat are viewed upside down.  Otherwise, viewing it in the conventional sense would require me to site on the kid’s chest, straddling the poor youngster, which not only is awkward, but could land me in jail, so I was told.

Once a good view is obtained (see drawing above), a variety of devices to remove the adenoids can be used while visualizing the site through the mirror.  The older techniques included a variety of curettes or adenotomes which cut or scraped the adenoids out.  A pack is then placed to control bleeding (called achieving “hemostasis” in medical terms) and afterwards bleeding is controlled by electrocautery; older techniques used a variety of chemical cauterizing agents.

Many surgeons nowadays use a technique called cold ablation (coblation) which actually irrigates the site with saline solution (salt and water similar to the body’s serum composition) as the adenoid is ablated and removed.  The adenoid tissue is essentially cauterized as it is being simultaneously suctioned up with the saline resulting in a more controlled, layer by layer removal of the adenoid tissue with far less bleeding.  This technique has rather revolutionized adenoidectomies, which otherwise was a relatively barbaric procedure compared to the other surgeries ENT docs due that require more finesse.

At the conclusion of the procedure there is another check to insure there is no further bleeding.  The anesthesiologist then starts to awaken the child, and once the child starts breathing on her/his own and the anesthesia provider safely removes the breathing tube, the child is moved to the recovery area.  Once the child is more awaken, he/she can start taking fluids or ice chips and later soft foods.  This is done slowly to see how the child tolerates the diet, which we call “advancing the diet.”

Unlike a tonsillectomy which is considerably more painful, the child can start a normal diet later that day or the next since food will not rub against the surgical site.  Oftentimes, the child only needs over-the-counter pain medications such as acetaminophen (Tylenol) or ibuprofen (Motrin, Advil, etc) for pain and usually for a few days.  Sometimes the child might have ear pain since the adenoids are near the Eustachian tubes.  Bad breath, postnasal drainage and throat clearing are common for 1-2 weeks, so don’t fret about these.  Postoperative bleeding, though possible, is typically rare and much less compared to a tonsillectomy (which has about a 1-2 % incidence of bleeding after surgery).  I usually request the child not do any heavy exertion (ie, no rough-housing, play structures, heavy lifting, trampolines, or sports) for about 1 1 ½ -2 weeks, but this might be considered over-cautious with other surgeons.

So now that your curiosity is satisfactorily quenched, go to bed and get a good night’s sleep.