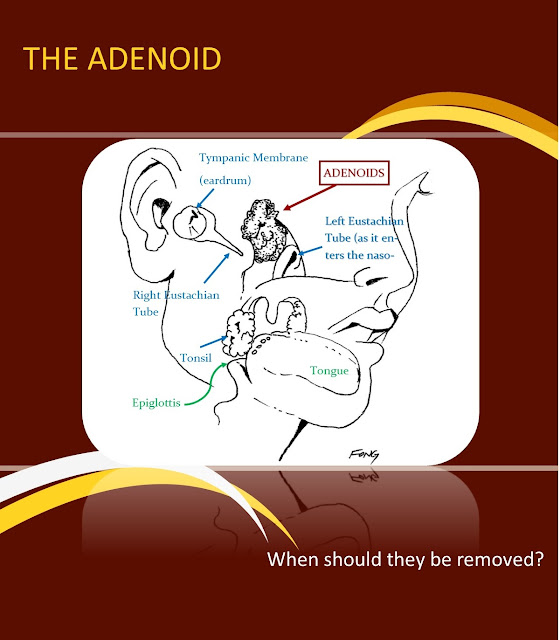 The last post we discussed the location of the adenoids.  Typically the adenoids shrink or “atrophy” as a child ages, and usually are quite small by 7 years of age.  So what are the indications to remove them?
The most common reasons for an adenoidectomy (removal of the adenoids) are:

So let’s describe how the adenoids causes each of these problems.

1.  Nasal obstruction:  The adenoids are located in the back of the nose, at the junction where the throat or nose meet, which is termed the nasopharynx.  If he adenoids are large, they will naturally block air from passing normal into the nose, down the throat, into the larynx and trachea and eventually to the lungs.  This leads to chronic open mouth breathing, causing dry mouth and throat, and affecting the quality of sleep, exercise and normal daily activities.

3.  Frequent or chronic nasal/sinus infections:  Also known as the “cesspool of the nose,” the adenoid can trap nasty stuff like secretions and bacteria, causing infections.  Typical symptoms are chronic or frequent discolored nasal drainage (ie, green or yellow “snot”), chronic cough due to drainage down the back of the throat (aka, post nasal drainage), recurrent fevers, sometimes headaches and facial pain.  By the way, kids typically get 5-6 colds a year due to viruses (this increases in a daycare setting as children tend to be germ factories, happily contaminating one another in blissful revelry) and symptoms usually resolve in a week or so.   But if symptoms last more than a week (“hangs onto colds longer and is sicker than the other kids,” as some parents would say), they’re more ill or feverish and need antibiotics frequently, then an adenoidectomy may be needed.  Typically, sinus surgery is not recommended in young children, but an adenoidectomy in many cases can provide substantial relief with a relatively simpler surgery, preventing or reducing the frequency of antibiotic use.  An adenoidectomy is often done with a tonsillectomy (thus the common term “T&A”) if the child has frequently recurring tonsillitis as well.
4.  Sleep apnea (along with a tonsillectomy):  Enlarged adenoids can contribute to sleep apnea—a temporary stoppage of breathing during sleep.  Nasal blockage can increase the resistance to breathing.  Parents will notice snoring, open-mouth breathing, and episodes of choking or gagging or coughing as the breathing is temporarily halted.  This is sleep apnea.  Sleep quality is affected, leading to daytime sleepiness, or paradoxically hyper-activity and decreased ability to concentrate, and also persistent bedwetting (enuresis in medical terminology).  If the tonsils are large, then these can fall into the throat, adding further airway blockage, and often both and an adenoidectomy and tonsillectomy are done in these situations.

5.  Dental abnormalities:  Nasal obstruction on a chronic basis leads to persistent open-mouth breathing.  This can affect a child’s teeth development.  Usually, the roof of the mouth develops a high and narrow arch (arched palate), the teeth become crowded and do not meet correctly (termed malocclusion) .Sometimes your child’s dentist will refer you to an ENT doctor prior to orthodontia work (ie, braces).  Often the child has other problems as above.

6.  Speech problems: this is a softer indication for removal, and patients can have a “nasal” voice (hyponasal) with a lower tone due to decreased resonance due to the enlarged tonsils. Often patients will have the other indications for surgery including speech problems.