Tracheotomy, tracheostomy and trach tubes...The What, Where and Why 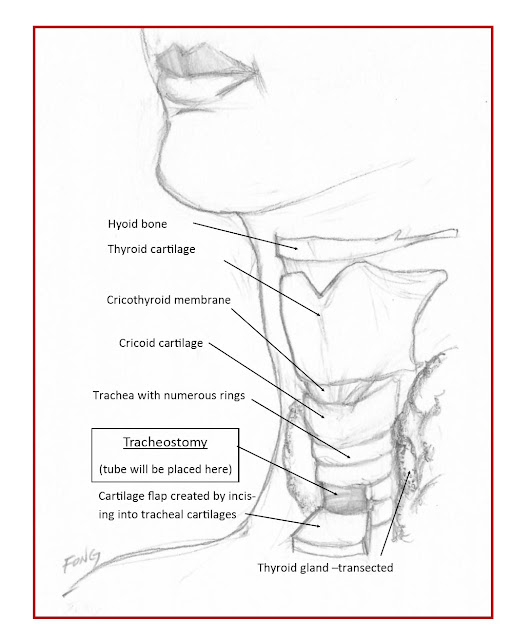 From time to time in the medical profession you’ll hear the term trach mentioned, pronounced as “trake."  So what is meant by this term?  Trach is shorthand doctor-speak for tracheotomy, which is the creation of an opening into the trachea or windpipe.  Before getting into more details of a tracheotomy, let’s clarify some nomenclature (fancy lingo for “highly technical terms that took years of schooling to learn”).

The “Why”
So what are the indications for this procedure?  Or in layman’s terms, “What the heck? A hole in the neck for a breathing tube?”

For some serious illnesses, a patient will have a breathing tube (known as an endotracheal tube) in his/her mouth that goes into the throat, through the voice  box and into the trachea, which is then attached to a ventilator—a mechanical device that breathes for the patient.  These people are too debilitated to breathe on their own.  Once the patient no longer needs mechanical ventilation, then the endotracheal tube can be removed.  However, some patients require prolonged help with their breathing, needing the ventilator for a longer period of time.  If this occurs for seven or more days, then a tracheotomy with placement of a trach tube might is indicated.

Why?  There are several reasons for doing this surgical procedure:

1.   An endotracheal tube can be very irritating to the larynx (or voice box) as well as the area below the larynx knows as the subglottis.  The subglottis is comprised of a fixed, nonexpendable ring of cartilage.  Scarring of both can occur.  If so, this can cause narrowing of the larynx or subglottis, obstructing the airway, making breathing difficult once the endotracheal tube is removed.  On the other hand, the trachea is composed of partial cartilage rings stacked one on top of the other, each ring being fused to the next with thick fibrous tissue.  As the diagram below shows, the back (posterior) wall of the trachea is soft, expandable tissue, and the tracheal cartilage forms a partial “C”-shaped ring.  The cricoid is a complete ring, and if pressure and irritation from a tube inside that ring for an extended time, that ring becomes scarred and narrowed.  This increases resistance to airflow which in turn increases the work to breath.  A tracheostomy places the breathing tube below these structures and thus prevents the scarring. 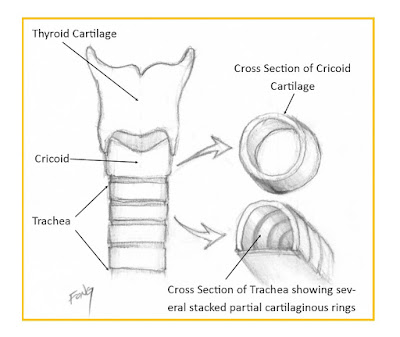 2.  An endotracheal tube that goes through the mouth, throat, voice box and then into the trachea is very comfortable.  Imagine having something like that when you’re wide awake—most of us would choke, gag and struggle and attempt to pull the darn tube out.  Many patients need to be sedated to calm them down.  Believe it or not, placing a tube below the voice box is more comfortable; the mild pain from the incision in the neck is less than the discomfort of having a tube sitting in your throat, and the sedation medication often is reduced or even eliminated.

3.  The work of breathing can be easier with a trach tube.  There’s this mathematical formula in physics that shows the resistance to flow of a substance (such as air or fluid) is increased when the length of the tube in which the substance flowing needs to pass is increased.  In other words, trying to pass air in a tube becomes more difficult as the length of the tube increases.  Imagine breathing through a very long straw.  The work to do this would tire you out, such that you’d eventually stop breathing altogether out of sheer exhaustion.  Not-breathing is not good.  The trach tube is much shorter than the endotracheal tube which decreases the resistance, making the work of breathing easier.  Sometimes a patient starts no longer needs the assistance of a ventilator much sooner, and I’ve seen patients come off the ventilator within 24 hours after placing their trach tube.

4.  Clearing of secretions is easier.  For patients with weak lungs, clearing mucous from the lungs can be quite a chore, and if unable to do this, those secretions can trap in the lungs causing bad things like pneumonia, which is an infection of the lungs.  Gross as it sounds, a trach tube allows for “pulmonary toilet,” meaning one can clean the lungs and trachea by passing a flexible suction tube into the trach tube, down into the trachea to suction all those nasty secretions.

These are just a few of the indications.  Of course, with any surgery there are risks such as bleeding, infection, injury to the larynx, trachea, lungs or esophagus behind the trachea.  However, as with most things done in medicine, a tracheotomy and tube placement is recommend if the perceived benefits outweigh the potential risks.

The “How”
The diagram at the beginning shows the relevant anatomy and location of the surgical opening.    An incision is made into the neck, sometimes a piece of the thyroid gland that covers the trachea (the thyroid isthmus) is incised to move it out of the way, and an incision is made into the trachea between the cartilage rings.  Many surgeons create a rectangular flap of cartilage—a door that opens into the trachea—which I sutured to the soft tissue under the skin.  This allows the opening to be more stable, allows the trach tube to slide in easier, and provides easier access should the darn tube accidentally falls out.  The trach tube is inserted as the old endotracheal tube is removed.

You may have heard of an emergent cricothyroidotomy or “crike”), or have seen this in the movies or on T.V., when some doctor-figure emergently cuts a hole into some guy’s neck with his teeny little pocket knife and inserts a straw or writing pen to save the day.  If you plan on practicing this on yourself just for kicks and giggles, please do us all a favor and don’t.  You might cut a major blood vessel and mess up the bathroom.   In reality, this typically is not a tracheotomy, but a cricothyroidotomy.  The cricothyroid membrane is a thick fibrous tissue that extends from the thyroid cartilage (which houses the voice box) and the cricoid cartilage below.  In emergent situations, it can be much easier to identify and then cut through this structure to gain access to someone’s airway or trachea.  This is done if there is an obstruction at or below the larynx that will not allow air to pass through the mouth and throat via conventional means.  If the tube is needed for an extended period of time, this is later converted to a tracheotomy to prevent narrowing of the cricoid ring.

So there you go, and impress your family and friends with this newfound knowledge.