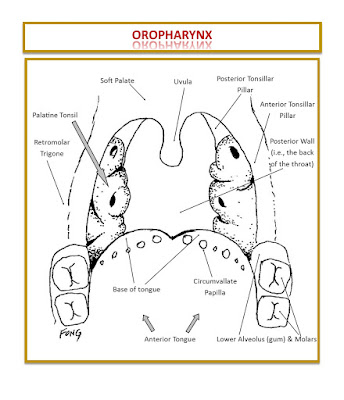 “Doc, I have a sore throat.  It’s killing me!  What can you do?” Aw yes, a frequent presenting problem for doctors and healthcare providers.  Naturally, treatment varies depending on the cause and type of problem and this topic can (and actual does) fill an entire textbook, and so I’ve broken this into a series of blog entries/presentations which will address some of the common and not-so common ailments of the throat.  Some of this was gleaned from my prior lectures for medical students and residents; so you’re in good company with our future generation of doctors (unless I’ve completely screwed-up this topic and inadvertently prevailed upon those poor trainees my flawed sense of “wisdom” which, I was told, tends to border on insanity and/or illogic from time to time).  Oh well…have a beer and read on…

First of all, what is the throat exactly?  Yes, a seemingly stupid question, but there's an anatomic distinction we physicians make when defining the source of one’s problem.  That’s why docs spend their first year studying lots and lots of anatomy.  The throat is what most of us call the oropharynx.  “Pharynx” may sound familiar to many of you, but there are distinctions: nasopharynx (naso- is a prefix meaning "nasal”), oropharynx (oro = oral), and hypopharynx. (hypo = “below”).  Then there is the larynx with the epiglottis which is an entirely different anatomic organ altogether.  When using the term “pharynx”, most people are referring to the oropharynx, a part of the pharynx that is visible when looking into someone’s mouth.  The nasopharynx, hypopharynx and larynx are not easily seen, requiring gadgets such as mirrors or scopes usually done only by ENT specialists. But many times the source of a sore throat is not in the oropharynx but beyond it in those other areas.

Right now, we’ll focus primarily on the oropharynx since this is visible to most people when looking in the mirror.  So go ahead and do this and you may notice some interesting features. 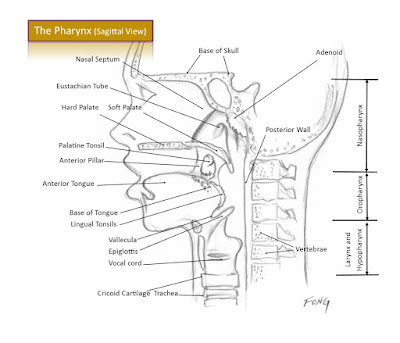 From front to back, the oropharynx includes the space between the retromolar trigone and circumvallate papillae all the way to the back wall of called the posterior wall.  From top to bottom it includes the soft palate down to the lower part of the base of tongue (to the vallecula, a smooth trough of tissue that blends the front part of the epiglottis of the larynx to the base of tongue).  The space above the oropharynx is the nasopharynx, below it is the hypopharynx and in front of it is the oral cavity (i.e., the rest of the mouth).

There are a lot of reasons people can have a sore throat: inflammation, infection, injury, tumors.  The most common is some sort of infection and so we’ll talk mostly of these.

So what’s an infection?  This occurs when microorganisms invade the tissue of the throat (aka, oropharynx) causing discomfort or pain.  Microoganisms  (or microbes) include viruses, bacteria, and fungi, i.e., nasty little critters invisible with naked eye.  These guys normally inhabit the mucosa—the moist, pink tissue that lines the tissues found in the mouth, throat, gut, trachea, and in the hinterlands down south called the genitals—essentially any tube or tract that gives rise to any orifice into or out of the body.

The numerous microbes live amongst themselves in a diverse and peaceful harmony, in a collective tolerance that keeps one another in check, some may argue even better than we humans on a global scale.  But alas, when one species  dominates, it starts invading territory, crowding other species out, and damaging the very tissue they inhabit.  This is an infection.

Viruses are things like the common cold or flu or mononucleosis (mono).  Treatment is usually symptomatic (i.e., things to ease the discomfort and allow the body to heal naturally).  Viral infections typically resolve on their own, sometimes medications such as antivirals or steroids (to lower inflammation and help with symptoms) might be given.  As with most things in medicine, the doc needs to weight the benefits versus the potential risks when prescribing a medication.  Note:  viruses do not respond to antibiotics—so give your doc a break if she or he doesn’t prescribe you one.

Fungal infections are the least common.  These include things such as thrush (candida or “yeast” infection).  Believe it or not, fungi too normally live in your mouth and throat and other places such as the gut and down yonder in genital country.  Usually fungi over-populate when the bacteria population dwindles, such as when antibiotics are given.  Thus another reason antibiotics should be used judiciously—the can cause secondary infections (ie, in this case, a fungal infection).

Bacteria are another common cause of infections, and these include tonsillitis, strep throat, and pharyngitis.  Pharyngitis (-itis = “inflammation”) refers to a generalized involvement of the oropharynx, where any of the structures mentioned above can be involved.  Tonsillitis refers to infection of the tonsils, tough other parts of the oropharynx are often involved as well.  Strep throat is a particular type of tonsillitis, caused by a bacteria known as Group A Streptococcus or Streptococcus pyogenes.  We’ll talk more about infections in subsequent sessions.