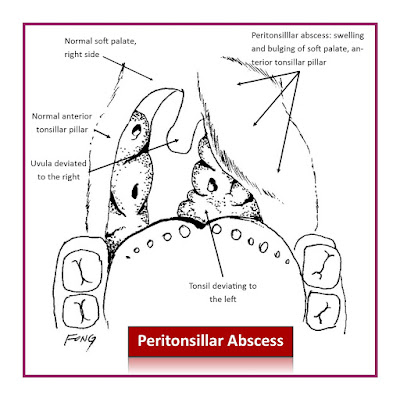 TEST YOUR MEDICAL I.Q.:
You have a sore throat and it’s oddly only on your left side.  Your voice is muffled, you can barely talk.  You have a fever, left ear pain, you can’t swallow a thing, not even your own saliva.  In fact, you can barely open your mouth at all (which, depending on whom you ask, might be a blessing in disguise).  What do you do?

a.  Take a bunch of lozenges, sip beer slowly through a straw until you’re thoroughly inebriated and fall asleep.
b.  Call your crazy brother-in-law Charlie who’s really into all things medieval (especially with his large and scary collection of knives and swords) and ask him for a good old-fashioned blood-letting.
c.  Seek medical attention immediately.  Go to your doctor, and if she/he is unavailable, then go to an emergency room (E.R.).
d.  Wait a day or two more and then when it gets really bad to where you’re having problems breathing, go to the E.R. at 2 A.M., since you know that the ENT doctor on-call has nothing better to do than waste his/her time sleeping.
e.  Choice “a” first and if that fails, then choice “d.”  Avoid choice “b” since blood-letting might be denied through your insurance (and the pre-authorization would take weeks) and Charlie might charge an enormous co-pay.
f.  Choice “b” first, but if Charlie can’t stop the uncontrolled bleeding, resort to choice “a.”  Once you wake up and you’re still bleeding and everyone around is panicking, then you might want to consider choice “c.”
g.  None of the above.

If you answered anything but choice “c”, you’ve got problems or perchance partook in a few too many pre-test beers.  Read on and re-take the test.

As the title of this post implies, you might have a peritonsillar abscess, and you ought to see a medical professional immediately.  This can be a potentially life-threating problem particularly if it prevents you from breathing, which is not a good thing according to the doctor books.

An abscess is a collection of pus—a “pus pocket” if you will—that traps bacteria and inflammatory cells trying to kill those bacteria.  It’s the body’s way of confining an infection.  However, when the abscess is sizeable, and in this case next to a tonsil—hence peritonsillar—it causes a bunch of problems such as:
-Rather intense throat pain (what docs call odynophagia)
-Difficulty swallowing (dysphagia) due to the mass-effect of the abscess.
-Drooling, since saliva can be difficult to choke down, so some people simply let it drool out of their mouths.
-Difficulty opening the mouth (trismus) due to inflammation of the soft tissue and muscles around the abscess.
-Ear pain, which is referred from the site of the infection, since there are nerves that supply the throat that also sends a branch to the ear.
-A “hot-potato” voice, characterized by a muffled quality of voice that apparently sounds like someone with a hot potato in their throat (and no, please don’t try this at home).
-Neck pain, due to enlarged and inflamed lymph nodes that drain that side of the throat.
-Fevers and sometimes chills
-If it really gets bad, then airway compromise—i.e., you’re having problems breathing—can occur.

Most people go to the E.R. when this occurs due to many or all of the above symptoms, which is a the right thing to do for immediate assessment and treatment.  On exam, the abscess causes a bulge around the tonsil, pushing the tonsil away along with the uvula to the other side. This causes the pain and difficulty swallowing and the trismus.  The doctor will often start antibiotics, sometimes a steroid to reduce the inflammation and fluids all through an i.v. since many people become dehydrated.  If there are questions about the diagnosis, a CT (computed tomography) will be done.  The attached CT image shows the abscess via an axial view—think of a slice through the neck and throat and viewing it from below. 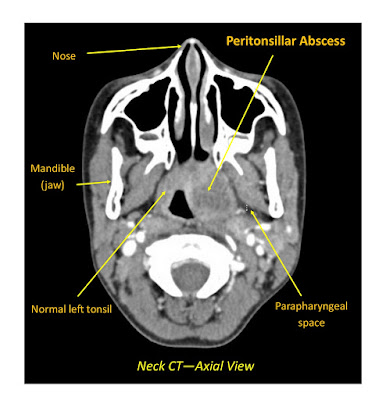 If there is a sizeable abscess, many times the ER doctor or an ENT doctor will attempt drain it with a needle.  Sometimes they will make an incision at the site and then drain it (a fancy term called “I & D” for incision and drainage).  Usually we try to treat it this fashion first, for often the patient feels much better soon after, and can go home on oral antibiotics.  A tonsillectomy is then done later after further healing which makes surgery a bit easier since operating in an acutely inflamed and infected area can be quite a mess.  On the other hand, if a bedside needle drainage or I & D cannot be done, the patient is often admitted for iv antibiotics which in some cases can improve things considerably.  If the patient worsens or there is a concern for airway compromise, then an immediate tonsillectomy and drainage of the abscess is done under general anesthesia in the operating room.

So you have it, a short synopsis.  For those who failed the test, go ahead and do it over.  If you fail it a second time, immediately contact your Common Sense Therapist.