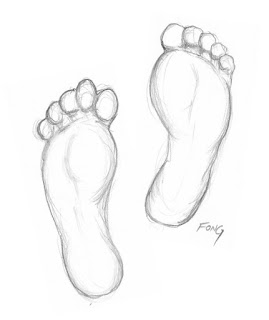 I run in my bare feet.  Not in those “barefoot shoes,” but in bare, unadorned, purely naked feet.  Why?  It’s more natural.  You’re less prone to injuries (though this is still a debatable topic in the running world).  Besides, it feels great.  But I came upon this purely by happenstance.

I’ve been a long-distance runner nearly my entire life.  Well, after a hiatus between college and middle-age, where I resumed running after finishing all that schooling and training to become a doctor.  I ran my first marathon at 43 years of age.  I was running one to two per of these a year, and just prior to my 50th birthday, I ran two marathons and a 50K (31.1 miles) in a span of 4 months.

After my 50th birthday, I wanted to spice things up.  I heard and read about minimalist shoes, how they mimic running in bare feet, so I decided to try a pair.  I have a bent little toe on my right foot, and no matter how hard I tried, I could not get it to fit in a pair of the Vibram Five Finger shoes that look like gloves for the feet.  So I tried a pair of New Balance Minimalist shoes which didn’t have the little toes.  These, like the Five Fingers, have no cushioning under the foot.

I ran 3 miles in those shoes on my first try.  Later, I did 4 miles, 5 miles and then one day went out for a 7-miler.  About 5 miles into that run, I felt a burn in my Achilles tendon.  I tried to run it off, but it got worse until I was forced to stop.  I was still 1 ½ miles from the car and had to wobble my way back.

I couldn’t run for another 3 months until my Achille’s healed.  Darn!

I also hadn’t read the warning on the inside of the shoe box, which said something to the effect that when using these shoes, one is suppose to decrease their typical mileage by 90%.  Ninety percent!

The problem was I still ran as if I were wearing normal running shoes where most of the cushioning is at the heel.  I still stuck the ground with my heel in these minimalist shoes.  I didn’t know you were suppose to change the way you ran.  I was merely stupid.

So, I went back to normal shoes and eventually got back up to respectable mileage and planned to run another marathon.  I signed up for it, paid the fee, and made reservations far in advance for lodging.  My son was to run a ½ marathon that same day.

As I was doing speed work around a track to prepare for this marathon, I developed a pain in my right arch.  I’ve had this before—it’s called plantar fasciitis.  In the past this resolved with rest and ice and flexing my foot back with this contraption called a Strassburg Sock I purchased online.  It worked like a charm in the past.  But this time, I still had pain well after a month.  In fact, I could barely walk let alone run.  Two months passed and the day of the marathon came.  As my son was still in shape to run his event, we drove and stayed overnight as planned, but I couldn’t run my marathon.  This was the first time I was unable to run an event for which I signed-up.  Naturally, I couldn’t get a refund on my entrance fee of about a $100.  But I later drank the free beer that came with the fee.

So as my son ran his event, I decided to root for him on various parts of the course.  For some unknown reason that baffles me to this day, I decided to do this without shoes.  I jogged slowly a few yards at a time in the grass.  It felt nice, not nearly as painful as running or walking in shoes.

Massaging my foot on the way home later, I decided to try running purely without shoes.

I ran in the grass for about a week or so and noticed my plantar fasciitis was getting better.

I’d read about barefoot running before, in Born to Run by Christopher McDougall, so I knew there was some data out there that showed running shoeless was beneficial.  I continued running really short distances, not more than a quarter to a half a mile at a time.

Being intrigued with this novel running style, I looked for more books on the topic and found Barefoot Running by Michael Sandler.  He advocated running only on hard surfaces such as concrete.  This seemed counter-intuitive, but I figured I had nothing to lose so I gave it a try.

I could only do a few hundred yards at a time, stopping frequently since running in bare feet can really hurt, especially when stepping on little rocks that are difficult to see.  I understood why he recommended hard smooth surfaces at first: you didn’t want to step onto nasty things hiding in grass, like shards of glass, large sharp rocks or splinters, discarded hypodermic needles or small pieces of dog poop.

After two weeks I could run two miles nonstop in bare feet.  And my plantar fasciitis all but disappeared!  I was hooked!  I was excited just to be able to run again.

The Mechanics:
With a conventional running shoe where the majority of cushioning is placed at the heel, the runner will over-stride, landing on the heel with the foot way up front and past the body’s center of gravity.  This results in a stopping or braking action, and the landing forces are directed up the bones of the leg to the knee and hip and spine.  This bypasses the natural shock-absorption features of the foot, ankle and leg, relying rather on artificial cushioning limited to the shoe. 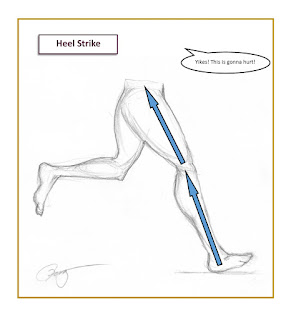 When running barefoot the key is not to over-stride but to decrease the stride length (the distance between successive foot-falls).  This requires landing on your forefoot rather than the heel, a more natural process.  This allows the natural shock-absorber properties of the foot to come into play.  The foot has small muscles and an arch for a reason—to act in a spring-like or bouncing action.  This keeps the leg perpendicular to the ground where the landing forces are directed 90 degrees upward to the leg, closer to the body’s center of gravity.  The leg muscles engage with foot, like a shock-absorbing unit, preventing transmission of forces up through the bones of the leg, hip and spine.  You’re using more of the muscles of the foot and leg to absorb the forces rather than having them transmit up through less compressible bone.  As you can imagine, hitting the heel on the ground millions of times during years of running can lead to undesirable injuries such as shin splints, knee pain, hip pain and back pain. 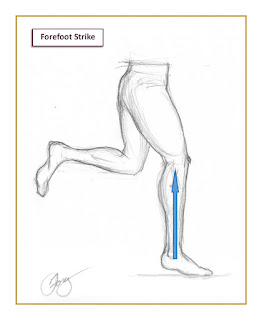 Running barefoot also requires a shorter stride, but to compensate, the runner increases the stride rate—the number of strides per minute.  Average recreational runners tend to run with a stride rate of around 150-160 strides per minute.  Seasoned competitive and world-class runners have a much higher stride rate—around 180 per minute.  Think of it this way, the sum total of forces to run from point A to B may be the same despite the manner in which you run, but the amount of force per stride is decreased as the stride-rate increases.  This is analogous to pedaling a bike in low gear: you must turn the pedal faster (more revolutions per second) but each turn requires less effort (force) compared to pedaling at a higher gear, where you’re pedaling slower but at greater effort.

So if you are a runner plagued with injuries or simply want something different to motivate you out the door, you might want to partake in this wonderful adventure.  Beware though: take it slow and walk frequently.  Don’t expect immediate results.  As with most things in life, be patient and don’t push yourself to go too far or too fast.  From experience, I can attest that doing things contrary to common sense only leads to misfortune.  I’ve injured myself several times from over-use, and I have no one to blame but myself.  Don’t be like me; don’t be stupid.  Take to heart the quote from Clint Eastwood’s Dirty Harry character:

“A man’s got to know his limitations.”

This goes, without saying, for adventuresome women too, though women tend to have a whole lot more common sense than men.  As always, use your brain and be careful.

Check out these two really good books on the subject: Born to Run by Christopher McDougall, and Barefoot Running by Michael Sandler.  They’re both great reads.