Neck Mass Evaluation and Workup: When Malignancy is Suspected 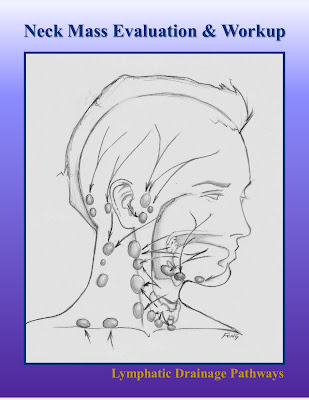 The workup for a neck mass, particularly in adults, is not as straightforward as most folks believe, prompting some to ask, “Doc, why not remove the darn thing!”  The answer: “Well, uh, it’s more complicated than that.”

You see, a lump or bump in the neck can be a variety of things.  As mentioned in a prior post (Neck Mass: Not Every Lump Is A Tumor), there are different structures in the neck that can be seen or felt.  Some of these structures are normal and some may be heightened variations of normal.   Of course, it could be abnormal, but before embarking on surgery, you got to first determine the cause; you don’t want the doc to remove, say part of your larynx, just because that particular something you noticed is actually your Adam’s Apple (part of larynx that projects outward) or remove that pulsating lump which could be your carotid artery—it goes without saying, you’d have one fine, bloody mess.
Neck masses occurring in patients are not that uncommon, yet often the underlying cause is not easily determined.  Most of the time, a mass in the neck is due to an enlarged lymph node.  As such, we’ll discuss the lymph node system of the head and neck, an exhilarating and thrilling topic, depending on your audience, usually confined to quirky ENT docs.

There are a variety of causes for lymph nodes to enlarge (from here on we’ll sometimes refer to these simply as nodes), one of which can be cancer.  In the neck, squamous cell carcinoma (SCCA) is one of the most common cancers found.  SCCA arises from abnormal, cancerous transformation of the epithelial cells that line the mouth, throat, nose, nasopharynx (the area behind the nose) and larynx—essentially the moist pink tissue found covering those areas.  Also, SCCA can occur anywhere on the skin of the head, face and neck.  SCCA can then spread via tiny lymphatic channels to various lymph nodes in the neck, causing one or more of these nodes to increase in size and giving rise to an abnormal mass in the neck.  The diagram at the beginning shows the pathways of lymphatic drainage from their various sources to different nodes in the head and neck.

Lymph Nodes and the Lymphatic System

Lymph nodes are part of the immune system—the body’s defense system--protecting you from a variety of foreign invaders.  The lymphatic system consists of tiny channels that drain virtually any surface of the body, whether it’s the outer skin or the inner tissue lining the various orifices or entry points leading deep into the body.  These lymphatic channels carry antigens—various proteins from viruses, bacteria, fungi or other stuff such as allergens (pollens, animal dander, etc.) or cancer cells--and carry it to a series of lymph nodes.  The lymph nodes use the antigen to stimulate certain white blood cells within it (lymphocytes) to create antibodies to fight off those foreign antigens.  Also, other cells (macrophages, other white blood cells) in the nodes are stimulated to gobble up antigens.   The lymph node increases in size to accommodate all this extra activity.  Think of the lymph nodes as small factories creating defensive weapons.  These weapons: antibodies and white blood cells are then released into the blood stream to prevent the spread foreign material from creating havoc to other bodily areas.

Once they complete their task, the nodes typically reduce back to normal size.  However, in the case where an infection overwhelms the node, there is over-population of white blood cells and the node continues to expand.  Many of the cells die (foreign invaders and white cells) and then purulent liquefaction occurs, also known as pus, and then a phenomenon called an abscess is formed, which is essentially a collection of pus.  The body tries to wall this off, but often cannot get rid of the dead material itself, leading to more inflammation and unpleasant things such as pain and fever and sometimes a big mass in the neck.  This then requires surgical drainage.

Cancer cells can also invade lymph nodes.  In some cases, cancerous cells growing in a particular area, say on the skin or in the throat may spread through the lymphatic channels and become trapped in the lymph nodes along those channels, stimulating the cells in the node to mount a defense, just as they would with an infection.  However, sometimes the cancer cells continue to multiple and grow, overwhelming the defenses of the node and instead of being killed and gobbled up, they proliferate within the node causing it to enlarge.  This is termed a metastatic lymph node.  Cancer cells can then leave that node, travel down the lymphatics to involve other nodes along the way or to distant sites in the body.

Given the nature of lymphatics and lymph nodes, I hope you can now imagine the importance of determining the source before whacking out any tissue in one’s neck.

The site of node involvement can give you a clue to the source, by working retrograde—i.e., tracing the drainage pattern backwards along the predicted flow of lymphatics from the involved node to the source.  This source is called the primary site.

Searching for the primary site

Searching for the primary site refers to a diligent search for the original source of the cancer.  Finding the primary site is important in order to properly treat the cancer.  Merely removing the involved nodes misses residual cancer elsewhere.  The workup is thus done in step-wise fashion:

1.  Physical Exam
The doctor does a thorough examination.  This includes carefully examining the ears, nose, mouth and throat, and also palpating (feeling the neck with hands).  Don’t be surprised if your doc puts a finger or two into your mouth (hopefully gloved—you may not want to taste grubby fingers soiled with the day’s lunch or something worse) feeling around while also pushing around your neck and jaw and face with the other hand.  Sometimes unusual areas of firmness or mass-like findings are detected that could not be visualized.

2.  Fiberoptic nasopharyngoscopy and laryngoscopy.
Oftentimes, a fiberoptic nasopharyngoscopy is done.  This is a fancy term for placing a flexible scope into the nose, down into the throat to visualize all those nice structures on the way in and on the way out.  Though gruesome-sounding and very hideous when seen for the first time, this procedure for the most part is rather painless and most people tolerate this well.  If your doc has a smidgen of humanity, the nose and throat is first sprayed with an anesthetizing medication to numb the tissues and a decongestant to open the nose, allowing for easier passage of the scope.  With the scope, the doc checks out the inside of the nose, the back of the nose as it blends with the throat (the nasopharynx) and then further down to view the oropharynx, larynx and the hypopharynx (the entrance into the esophagus located behind the larynx).

3.  Imaging: this usually is a CT scan (Computed Tomography) of the neck, which provides nice sectional images to determine the extent of the neck mass, its relation to other structures in the neck, whether other nodes are involved.  Sometimes the CT may give a clue to the primary site if it cannot be found on exam or with the fiberoptic scope.

4.  Biopsy: A biopsy is a technique whereby various amounts of tissue are removed from the suspected mass which is then sent out to the pathologist, who then renders a diagnosis.  A needle biopsy of the mass if primary not detected.  This requires anesthetizing the tissue over the mass and inserting a small needle into the mass to obtain small bits of tissue.  Since the pathologist views the specimen under a microscope, a very small amount of tissue removed in this fashion often is sufficient for a diagnosis

5.  Panendoscopy (where pan- means  “all”): This is a variety of endoscopic procedures where various types of scopes are used to view the mouth, throat, larynx, esophagus (the tube leading to the stomach) and sometimes the trachea and bronchi (the breathing tubes the bring air to the lungs).  These are often rigid endoscopes that look directly at tissues and are more formerly called: direct laryngoscopy, esophagoscopy, bronchoscopy and directed biopsies of any suspicious tissue.  If nothing suspicious is found, then biopsies are done where cancer may be hidden, namely in the area of the tonsils, base of tongue and nasopharynx.  If the palatine tonsils are present, both are typically removed since a small cancer can hide within the depths of the tonsil and a biopsy can easily miss this.

6.  Open biopsy or removal of the mass/node.  This is the last resort.  If the prior needle biopsy was not diagnostic or if there is suspicion for lymphoma (a type of cancer that originates in lymph nodes), then removal of the node is required and sent immediately to the pathologist who examines it with a technique called frozen section pathology.  A panendoscopy usually is scheduled at the same time.  If SCCA is noted on frozen section pathology, then we proceed with a panendoscopy to search for the primary.  If something else is noted such as lymphoma, then no further procedures are done, since treatment for this is typically medical, and not with further surgery.

6.  PET CT (Positron Emission Tomography with CT):
This is an imaging technique that helps to identify the primary site as well as any other sites in the body that might be involved, such as other lymph nodes or within other organs such as the liver, bone, brain, etc.  This modality uses radiolabeled glucose molecules known as FDG (fluorodeoxyglucose).  Glucose is the common simple sugar your body uses for energy.  Malignant cancers tend to be hyper-metabolic—meaning they’ll consume glucose faster than normal bodily tissues.   The FDG will thus accumulate more readily in tissues invaded with cancer cells and light up on the PET CT.  Thus, imaging with this technique may help identify the primary site as well as other lymph nodes in or beyond the neck.

This was not meant to be an exhaustive coverage on this topic, but to hopefully shed some light on the rationale behind the workup of a neck mass suspicious for cancer.  Though receiving a diagnosis of cancer is devastating, don’t despair.  Treatment--via a variety of modalities including radiation therapy, chemotherapy and surgery--is potentially curative in most people, many of whom lead productive, high-quality lives afterwards.