Paranasal Sinuses: What, Where & Why? 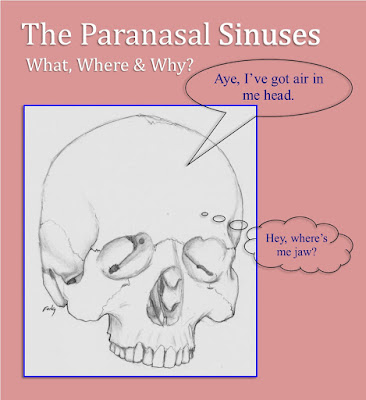 Sinusitis, sinus headaches, sinus infections, sinus polyps…a plethora of words associated with an assortment of problems.  Sometimes patients present complaining, “I have sinus,” as if the mere presence of the sinuses themselves is an abnormality.

What do we mean by the term sinus?  In medical lingo, a sinus is a space or chamber with an opening into it, allowing for entrance and/or exit of things such as fluids, secretions, air, etc.  In the ENT world, the term usually refers to the paranasal sinuses, where para- means “next to,” and as such, we are referring to the sinuses around the nose.  These sinuses are spaces within the bones of the skull that empty or drain into the nose.  I’ll interchangeable use both paranasal sinuses or just plain sinuses, but for this purpose they terms are synonymous.

Some people presenting with sinus-related problems sometimes plainly state, “Why don’t you just remove my sinuses?”  The confusion here is the sinuses are not an actual physical entity or organ amendable to removal, but really the lack thereof.  As mentioned above, the paranasal sinuses are the actual spaces, spaces developed within bone and lined with mucosa—pink tissue that lines most of the orifices and cavities inside the body.  On the other hand, some people don’t fully develop sinuses, where a sinus may actually be absent, prompting concern that the lack of a sinus would cause a problem.  On the contrary, lacking a sinus is a benefit—it’s one less sinus cavity that can cause problems.  And no—we cannot rid you of your sinuses by filling them with something such as concrete.

Some of the sinuses are present at birth, while others develop later as the child grows to adulthood.  Sinuses are very small in young children relative to the size of their head and face.  As the child ages, the face tends to grow at a faster rate than the cranium (the part of the head enclosing the brain) and likewise the sinus spaces increase in volume with facial growth.

Functions of The Paranasal Sinuses

So, what purpose do the paranasal sinuses serve?  Several hypotheses exist (as with many things in medicine there are no certainties):

1.  Provides lightness to facial bones and head.  In other words, the air-filled spaces of the sinuses serve to lessen the weight of the head.  Imagine going through life dragging your face on the ground.  You’d never find a mate and propagate the species.  Besides, your neck would cramp big-time, and your heavy head would certainly be a literal “pain in the neck” (one of the rare certainties in medicine).

2.  Creates buttresses that protect the brain from injury.  This is an interesting hypothesis.  The face will fracture in rather predictable patterns depending on the nature of the injury.  The facial bones are attached to the cranium (the part of the skull that encases the brain) via structures called buttresses.  These buttresses are partially formed by the presence of the sinuses.  With significant facial injury enough to cause fractures (breaks in the bone) these fractures tend to occur along these buttresses which act to dissipate forces away from the cranium and brain, acting like a shock absorber, so to speak.  Although facial fractures are no picnic and can require extensive surgery, many patients survive and can lead quality lives, as compared to those suffering brain injury where mortality (death) and morbidity (decreased quality of life) are more frequent and more significant.  In children, where the face and sinuses are relatively small compared to the cranium, facial injuries are less common but head or brain injuries are more common for the same type of injury.  The adult, with a relatively larger face, has better shock-absorptive protection.

3.  Humidifies and warms inspired air before it hits the lungs.  As you already know, you need the nose to breath in air.  You can do this only through the mouth, but this is difficult to do; try plugging both sides of your nose and go out for a run or brisk walk or any other activity; it’s very cumbersome and uncomfortable to do.  The tissue lining the nose and sinuses moisturizes and warms the air before it hits your throat, trachea and ultimately your lungs.  In other words, the air is conditioned prior to entering the lungs.  Unconditioned air irritates the tissues of the trachea and lungs causing unpleasant things as pain, coughing and difficulty breathing.

4.  Provides a first-line of defense for entry into the nose.  The sinuses, along with the rest of the inside of the nose, are lined with mucosa, much of which is ciliated.  Cilia are microscopic hair-like projections on the mucosal cells, which move secretions and any foreign particles in the secretion.  The cells also produce mucous which creates the moisture within the nose and sinus cavities.  It’s the presence of mucous that traps potential disease-causing substances and the action of the cilia to propel those substances out that creates a first line of defense to such a portal into the body.
Air also circulates through the sinuses to aid this function (think of increase surface area to contact potential foreign invaders).  In addition, there are also immunologic cells in the mucosa that produce antibodies as well as cells that serve to devour any foreign threat (such as bacteria, viruses or fungi).

5.  Provides resonance to the voice.  The thinking here is the voice has tonal qualities created by the airspaces of the sinuses, where sound resonates or vibrates, providing a unique characteristic that possibly aids in the hearing and understanding of human speech.  Thus the sinuses are important in human communication.  Also the pleasant aspects of singing are a large part due to nasal and sinus resonance.  Listen to someone singing with a cold and plugged nose and you get the picture—it’s not as pleasing.

As with anything else in the body—even with air-containing spaces such as the paranasal sinuses—problems can arise.  An abnormal problem arising in the body is called disease.  Before getting into diseases, a little primer of sinus anatomy is required.  Doctors study anatomy first before studying pathology (disorders of tissues in the body) and ultimately means to diagnosis and treating the disease affecting that particular anatomic part.

There are 4 major sinuses: frontal, ethmoid, maxillary and sphenoid sinuses.  There is one of these sinuses on each the face and skull that drain into the respective side of the nose.  The frontal sinuses form above the eyes in the forehead. The ethmoid sinuses are located just medial or in between the eyes.  The maxillary sinuses are located below the eyes in the cheek areas, above the upper teeth.   The sphenoid sinuses are contained in the part of the skull base way in the back and empty through ostia in the very back of the nose.

Let’s first look at coronal sections of CTs, where Figure 1 shows a plane cutting through the skull and face in a coronal plane.

Imagine viewing successive slices done in this manner, from front to back (or as we say in the medical world, “from anterior to posterior”).  This is how we read and interpret CT images (Figure 2)

On CT images, black is air, white is bone, and gray is soft tissue, fluid, mucous, pus, blood, polyps, tumor or anything other than bone or air. You’ll notice there is some gray hue within the bone of the hard palate: this is bone marrow (which in a sense is soft tissue).  The CT in Figure 2 shows a large mucous retention cyst filling the left maxillary sinus.  By convention, the patient’s right side of the body (or face in this example) is on the left side of the image and the patient’s left side is on the right  of the image.  Imagine the patient whose image you’re viewing is looking directly at you.

Inside the nose lateral to the middle turbinate (between the middle turbinate and the side wall of the nose next to the eye) is something called the ostiomeatal complex, where ostium = opening, and meatal = pertaining to the meatus.  This is where the frontal, ethmoid and maxillary sinuses drain.  Thus this is an important area where disease in this area or blockage can affect all 3 of these sinuses.   The sphenoid sinuses drain via a separate ostium, way in the back of the nose.  Figure 3 is a sagittal view through the face and head.  Imaging slicing the head down the middle, just a little to the left of the nasal septum and you’ll see the left side of the nasal cavity (inside of the nose) and the sphenoid sinus, bisected in that same plane (Figure 4).

Problems affecting the ostiomeatal complex (OMC) can affect proper ventilation and drainage of the frontal, ethmoid and maxillary sinuses.  This is the reason patients with sinusitis often have more than one sinus involved.

Also remember there are things around the sinuses themselves, as the sinuses are spaces encased in bone.  Outside the bone is muscle, soft tissue and skin.  Deep to the sinuses on the other side of the skull base is the brain. Thus, pain over one or more sinuses does not necessarily mean the source is the sinuses, as those other areas can be affected as well.

Symptoms of sinus problems: headaches, facial pain, pain around (periorbital) or behind the eyes (retro-orbital), upper teeth pain, nasal congestion (stuffiness or difficulty with nasal breathing), nasal discharge or drainage, decrease voice resonance (giving the stuffy nose or hyponasal quality to the voice) postnasal drainage, cough (especially when lying down or sleeping), sometimes asthma.—bronchospasm, where the small tubes leading from the trachea to the lungs spasm and become narrow, causing difficulty breathing and wheezing (that fine, high pitched noise heard in the lungs usually when a person affected with this exhales).

More on the treatment—medical, home remedies and surgical—in future posts.  One final note: do us all a favor and avoid the urge to test the shock-absorptive properties of your facial bones by plunging face-first onto a hard surface.  Or head-butt your spouse; your face/head pain will be the least of your troubles.