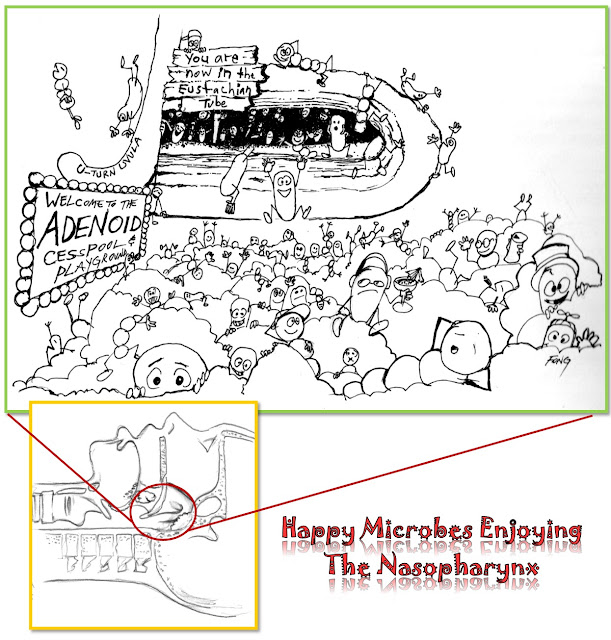 Otitis media is an infection involving the ear drum and the middle ear space behind the drum (otitis = ear inflammation, and media = middle) and is a common problem in children.  Oftentimes myringotomy and tubes are required, especially if the child has frequent or chronically persistent ear infections.  The term myringotomy is the actual incision in the ear drum, and a tympanostomy tube is placed within this incision to create a long-lasting opening across the drum (see the post Ear Tubes and Otitis Media, 12/29/2016 for more on otitis media and tubes).  I’ll refer to the entire procedure moving forward simply as “tubes.”

Some of you may also have heard, or know of, people who’ve had their adenoids removed for ear infections.  Some kids will have and adenoidectomy and others won’t.  So why and when are adenoids removed? 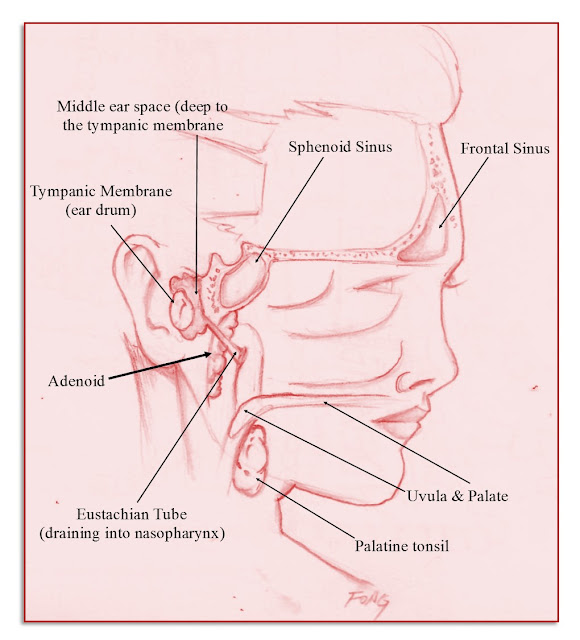 The anatomic relationship between the adenoid and the middle ear:

In young children the eustachian tubes are more collapsible and thus tend to close off more easily, especially when inflamed during colds or upper respiratory illnesses.  The eustachian tubes also are oriented almost horizontally as they travel from the middle ear to the nasopharynx, taking less advantage of the effects of gravity to properly drain middle ear.

Children usually outgrow otitis media by 4 years of age since the eustachian tubes mature by then, where they slope in a more downward orientation relative to the middle ear as the child grows, and they are less collapsible and less prone to closing off.  However, for those still having otitis media after that age--especially those who’ve had prior ear tubes and are needing tubes again--an adenoidectomy often is indicated.

The “cesspool of the nose”:

The adenoid often contains deep spaces, craters, clefts, etc that can trap secretions and nasty bacteria.  Think of it as a fertile playground suitable for the proliferation of little organisms (which we in the scientific field call microbes) like bacteria and viruses, and you’ll understand why the adenoid is so fondly called the “cesspool of the nose.”  These little critters happily thrive and multiply, like rabbits, albeit on a much faster and larger scale.  This “cesspool” concept is also the reason some children tend to have more frequent cold-like illnesses, or seem to “hold onto” colds longer, with symptoms of nasal congestion, nasal drainage, cough and the like. The adenoid sits next to the eustachian tubes, causing eustachian blockage, inflammation or both.  The eustachian tube becomes swollen, closes off, or does not open frequently enough to allow proper ventilation and drainage of the middle ear.

What about the tonsils?

A tonsillectomy is not indicated just for ear infections, since the tonsils not affect the eustachian tubes the way the adenoid does.  Often parents ask, “Hey doc, why not take the tonsils out while you’re there?”  Answer: “Sorry Dad and/or Mom, we try not do remove things if they’re not causing problems, as there are risks with any surgery.”  We weigh the benefit to risk ratio.  Also, a tonsillectomy is much more painful, requires a soft diet for about 2 weeks and often the child needs prescription pain medication, whereas with an adenoidectomy the child often is eating normal food the same day or the day after, and often a few doses of Tylenol or ibuprofen are all that’s needed.  There’s a greater risk of post-operative (postop) bleeding with a tonsillectomy; approx. 2-3% of children will have a delayed bleed from a day to two weeks out post-tonsillectomy.  Postop bleeding from an adenoidectomy is much less frequent; I’ve had only one post-adenoidectomy bleed in the 20+ years I’ve been in practice.

Hope this helps.  As always, feel free to leave comments or ask questions, since I monitor this site on a regular basis.

And remember: don’t be a martyr.  Though happy microbes are partying away in the cesspool of your adenoid and thanking you immensely for their vast enjoyment, don’t be too much of a victim and sacrifice your health.  Those little parasites are giving you not one iota of benefit.  In fact, they haven’t paid a cover charge, let alone feeding merrily on your bodily secretions for free.  Do yourself and your ears (and nose) a favor--have your ENT doc get rid of those nasty adenoids.