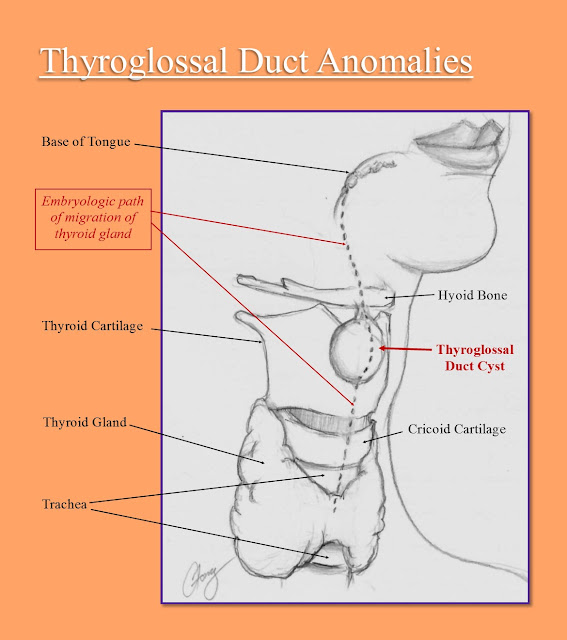 A lump or mass in the neck often poses particular challenges.  It’s not a simple “just cut it out and let’s be done with it” approach.  First of all, we must determine the cause in order to render the proper treatment.  The workup can be quite involved as a prior post explains (Neck Mass: Not Every Lump is A Tumor, But…It Might Be) since there could be numerous potential causes for the mass.  As that post explains, there are three major causes of neck lumps: congenital, inflammatory/infectious and neoplastic (tumor).

A congenital mass arises from something that existed at birth.  These types of masses often are quite small rendering them unnoticeable physically.  They often are dormant and remain small, presenting themselves sometimes years later.  They then become visible and/or palpable (noticeable by touch or feel).  One such congenital mass is the thyroglossal duct cyst.

A thyroglossal duct (from herein I’ll abbreviated it as TGD) anomaly presents itself as a mass or draining fistula.  Usually, it is a mass, one that typically is painless.  The mass is a typically a cyst—a fluid filled sac surrounded by a thin capsule of tissue.  Sometimes these become infected, rupture through the overlying skin and drain.  This is termed a fistula.

This typically occurs in children, but I’ve seen TGD anomalies in adults, the oldest was over 60 years old.  I’ve removed one in a seven-year-old girl, and ten years later in her 50 year-old father.  The theory here is the TGD cyst remains dormant and very small until one day for some unknown reason, the lining tissue starts secreting fluid, causing the cyst to grow, much like an expanding water balloon.

The TGD cyst or fistula tract is usually benign, though there have been rare cases of cancer discovered within, usually thyroid cancers, and often removal of the anomally with the small focus of cancer is curative.  Thus, it is important to send the specimen to the pathologist for thorough study.

The source of a TGD anomaly arises from the embryonic path of the thyroid gland as it develops during embryologic formation in utero (inside the uterus).  The thyroid gland forms as a bud of tissue arising from the base (or back part) of the tongue known as the foramen cecum.  As the embryo grows and develops into a fetus, this thyroid tissue descends, migrating lower in the neck to eventually reside below the larynx or voice box in the normal location for the thyroid gland.  The intervening tract from foramen cecum to the thyroid gland obliterates.  However, sometimes a remnant along that tract persists, giving rise to a cyst or fistula.  The location of a TGD anomaly can thus be found anywhere along that embryologic path, from the base (back or posterior part) of the tongue to the upper neck below the chin (the submental area) all the way to the lower part of the neck (see the figure at the beginning).  TGD anomalies are midline or close to midline, rather than off to one side of the neck.

Due to the embryologic path thus described, surgery for a TGD anomaly requires not only removal of the cyst and/or fistula tract, but also its source.  This requires following the tract leading to the anomaly upwards towards the base of the tongue.  Since the tract adheres to the hyoid bone, the central part of this bone is removed.  This is known as the Sistrunk Procedure.  Take heart though that no functional compromise to voice or swallowing occurs with this maneuver as the voice box (larynx) lies below and muscles of swallowing are preserved.  Prior to the Sistrunk Procedure, the rate of recurrence for TGD anomalies was very high with simple excision.

An incision is made horizontally over the mass, or if a fistula is present, the incision also incorporates the skin surrounding the opening into the fistula.  The strap muscles (bands of muscles running from top to bottom of the front part of the neck) are then separated in the midline and retracted outwards,, since the source of the TGD is midline.  Careful dissection is required to identify the anomaly.  Once the TGD anomaly has been isolated, dissection is carried upwards to the hyoid bone.  Cuts through the bone are made on each side of the tract and the central part of the hyoid is removed, exposing muscle of the base of tongue.  A small portion of this muscle is removed to take away any remnants of the tract, and this area is then closed in a purse-string fashion.  The strap muscles are reapproximated in the midline with absorbable sutures and the subcutaneous (below the skin) tissue and skin are reapproximated with sutures.  Sometimes a small drain is placed in the wound and out one side of the incision and removed the next day.  Pain medication can be prescribed, but many times over-the-counter medications such as acetaminophen (Tylenol) or ibuprofen (Motrin, Advil) are all that’s required, especially in children. 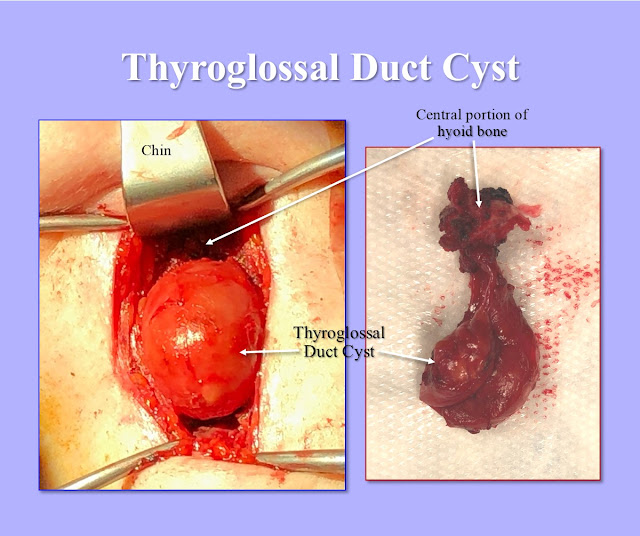 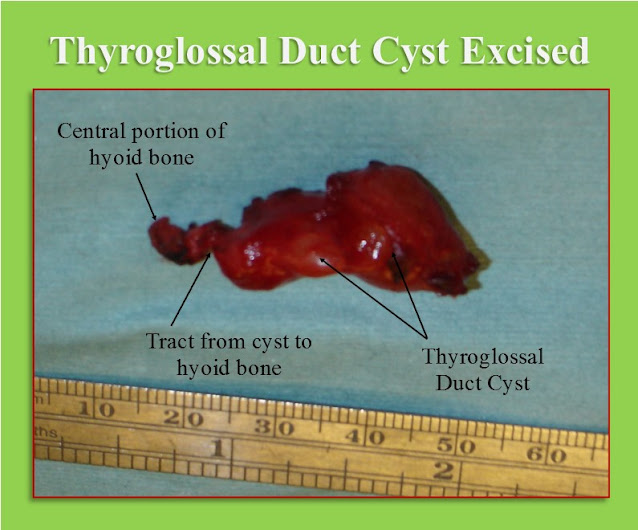 An excised TGD cyst from another patient
Children (and adults) typically tolerated this surgery quite well.  Often the patient is eating normally in a day or two and back to normal activity within a week, though we instruct parents to keep their activity light for at least a week and avoid manipulating the surgical site.  With time as the incision heals, it becomes rather unnoticeable.