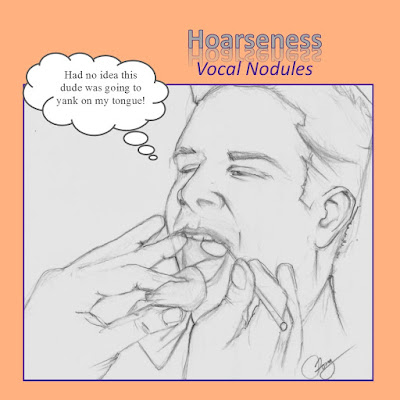 What do a screaming kid, a rock singer and a professional orator have in common?  They all have risks for developing vocal nodules.  Vocal nodules are one of the most common causes of hoarseness and affects all age-groups.

Hoarseness is a symptom of an altered voice quality.  The voice has a raspy, rough character, often with a decrease in projection—in other words, a reduction of the loudness of the voice.  If one who is hoarse tries to talk over this problem, he can also lose the voice completely, which fortunately or unfortunately (depending on who you are and your point of view) is temporary.

Vocal cords are part of the larynx that is responsible for generating the voice.  The larynx serves two important functions: 1. Protecting the airway (the trachea and lungs) from secretions, food and drink during swallowing, and 2. to generate a voice, important for human communication.  The vocal cords provide the varying pitches of the voice.  As they move inward (adduct), a thin column of air travels up from the trachea between the cords, generating sound. Varying degrees of closure and the vibratory characters of the edges of the cords create different pitches or frequencies (the number of sound waves travelling per second through the air).  The other tonal qualities that make speech intelligible are created as sound passes from the larynx though the throat, mouth and nose.  All these parts of the head and neck serve to optimize human speech such that it is understandable to the human ear. 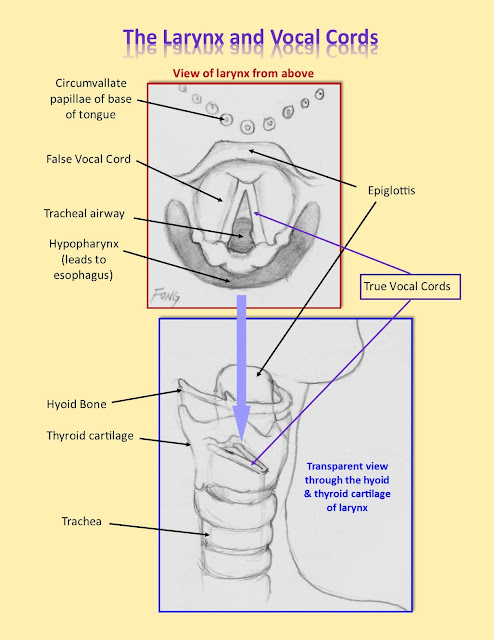 Examination of the larynx is extremely important to identify a cause for hoarseness.  As you can imagine, the causes of hoarseness are wide and varied, ranging from benign to malignant to scratching-the-head perplexing.  To examine the larynx, and more specifically view the anatomy and mobility of the vocal cords, the ENT doctor will do one of two things:

1.  She/he will it in front of you, grab your tongue (preferably with clean gauze and not her/his bare greasy fingers, unless delightful remnants of a juicy cheeseburger remain on those fingers which would enhance your experience and further justify your copay), pull your tongue forward, place a dental mirror at the back of your throat to catch a view of the larynx below.  To illuminate the dental mirror, the doc will wear a larger mirror strapped to his/her head that reflects a light source mounted on the side of the exam chair, or wear a headlight where the light source is directly on the doc’s head.  Either method reflects light down into the throat and onto the laryngeal mirror to view the larynx.   You must admit, this is pretty nifty as demonstrated by the guy at the beginning of this article.  If a good view cannot be obtained by this means, the doc will…

2.  Place a fiberoptic scope through the nose and part way down into the throat (see Nasopharyngoscopy).  Surprisingly, either method is actually quite comfortable, even for young kids, although some of said kids kick and scream since that’s in their nature, and the screaming typically is the cause of the nodules.

Vocal nodules are localized, benign areas of hypertrophic (overgrown) tissue located on the medial (middle edge) of each vocal cord.  Think of nodules as raised calluses created when the vocal cords close too harshly, for instance due to loud singing, screaming or yelling.  The vocal cords hit one another at a junction of the front 1/3 of the cords’ length.  This particular “sweet spot” is also known as the point of maximal impact.   When this area is repeatedly traumatized with vocal abuse, localized swelling occurs.  If the insult continues, often for weeks or months or so, then scar tissue develops, forming callous-like projections on the cords. 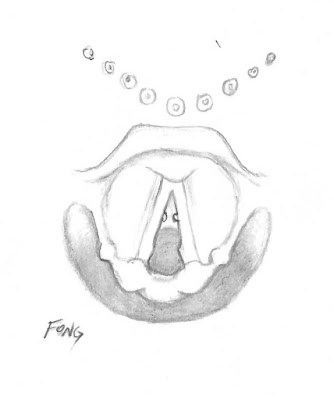 Nodules impair the tonal quality of the voice, altering the mucosal wave generated on the edge of the cord.  Also the nodules prevent complete closure of the cords, leading to additional alteration of the voice and the reason vocal projection is reduced.

Vocal nodules are also called singer’s nodules or screamer’s nodules, so named due to the cause of the nodules.

Intuitively, removing the nodules would solve the problem.  Shouldn’t it?  The mainstay of therapy, believe it or not tough, is speech therapy.  In fact, speech therapy is considered the standard of care for vocal nodules.   One must correct the vocal abuse—otherwise, the nodules will recur.  The speech therapist will assess for abnormal voicing and breathing patterns during speech, which are issues unbeknownst to the voice abuser, for the patient often unconsciously employs maladaptive voicing patterns leading to continued irritation, trauma and the abnormal voice.   The therapist then treats by re-training the patient for proper voice use and vocal hygiene.  Speech therapy is very effective.  It may not rid the patient of nodules completely, but often improves the conditions such that the patient returns to normal vocal function.  To prevent recurrences or to prevent this from occurring at all, one must use proper voicing techniques especially in professions requiring frequent and prolonged voice use.  Singers will benefit by working with a vocal coach.  Teachers and lecturers could benefit from the same, perhaps with just one session to learn proper speaking technique, and often amplification with microphones—more ubiquitous these days--will allow the speaker to use their normal conversational voice in situations with larger audiences.  Surgery is infrequently done to remove the nodules, unless one or both have an atypical appearance and your doctor is concerned with some other disease process.

So there you go.  Take care of your voice, avoid yelling at your spouse or singing too long in the shower.