The Larynx and Voice Production 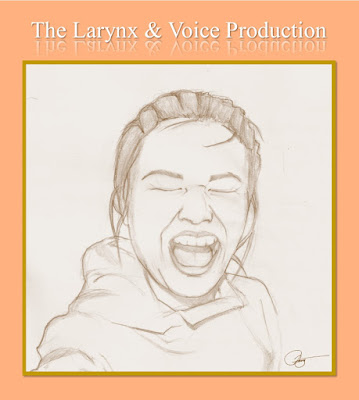 Don’t scream until you’ve read this.  Let’s take a step back.  Screaming is good sometimes, i.e., when chased by a large carnivorous animal, as a warning of eminent danger, or during a bout of uncontrollable laughter as exemplified by my daughter above.

Screaming, singing, laughing and vanilla-plain conversation all require a healthy larynx.  Known as the voice-box to you layfolk out there, the larynx has important functions as cited in a post, Anatomy of the Larynx: A Journey into your Voice Box.  No doubt, many of you exercise your larynges (the fancy way medical people pluralize “larynx”) extensively, to the joy or chagrin of unsuspecting ears receiving the soundwaves generated by your unique voice.

As with most organs in the body, your larynx requires nerves to function properly.  Fundamentally, nerves are thin, string-like structures that serve as conduits transmitting information to and from the brain.  Think of nerves as the wires in electronic devices, or the network of cables and fiber channels of the internet.  Nerves are wonderful structures: they carry electrical impulses much like metal wires, but do so using amazing biochemical processes to accomplish this.  As such, they are capable of bioengineering new pathways and new networks and perform self-repair where man-made structures cannot. 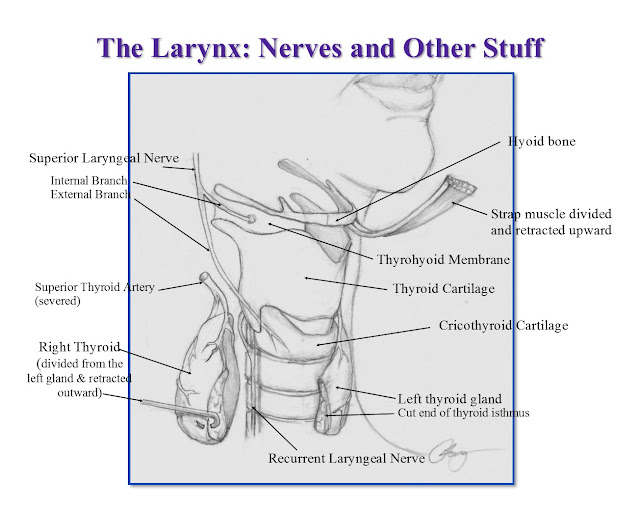 The brain is the ultimate Decider-In-Chief: it must tell an organ what to do, and also receive information from that organ so it can enhance its “to-do” commands.  Nerves serve to transmit all the input and output data to and from the brain.

Your larynx likewise has nerves delivering and receiving impulses of information and commands.  Much of this relates to movement of the true vocal cords.  Often these are referred simply as vocal cords (as opposed to the false vocal cords which play a much less significant role in voice production).  Here are two of the main nerves:

1.  Recurrent laryngeal nerve.  The name for this shifty nerve is well-deserved.  For some reason, known only to God and nature, the recurrent laryngeal nerves travel an unusual path in the body to ultimately land at the larynx.  They branch off the vagus nerve, a major nerve that travels from the brain down to the lungs.  After branching off the vagus, each recurrent nerve descends downward, then loops around major blood vessels, then travels upwards to innervate the larynx: the right recurrent laryngeal nerve loops around the subclavian artery in the lower part of the neck, and the left around the arch of the aortic artery (the giant, hose-sized blood vessel attached to the heart) farther down in the chest.  Upon coming back upwards in the neck (ie, the reason they’re called recurrent), they travel close to the sides of the trachea and pass underneath the thyroid gland on each side, and then enter deep to the cricothyroid muscle to enter deeper into the larynx.  These nerves are responsible for moving the true vocal cords inward (adduction) and outwards (abduction).  The resultant opening and closing of the glottic airspace between these vocal cords shapes the air as it passes from the trachea below through the larynx above.  These nerves also close the airway spontaneously when swallowing by adducting the cords together.  This is an autonomic response, meaning this is done involuntarily to prevent food, drink, saliva and any other unwanted substance from passing down into the trachea; otherwise you’d cough, choke and gag as the trachea tries to expel any unwanted substance to prevent it from going lower down to affect the lungs, causing nasty things such as pneumonia (infection of the lungs).  By the way, the act of coughing also requires closure of the glottis by vocal cord adduction—this can alter the air pressure below the vocal cords to do the necessary work of clearing bad stuff from the larynx, trachea and lungs.

The external branch of the superior laryngeal nerve travels to the cricothyroid muscle.  When this nerve is activated, it causes that muscle to contract, pushing the cricoid cartilage up and tilting the thyroid cartilage down and forward; the combined effect creates elongation and tension of the true vocal cords which further narrows the column of air passing between, contributing to the ability for the larynx to generate higher frequencies (i.e., higher pitches). 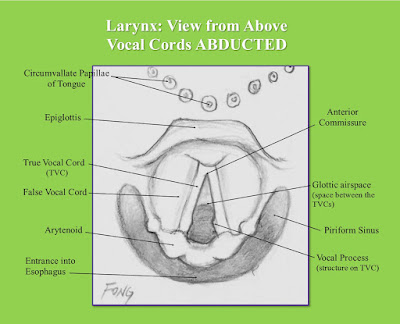 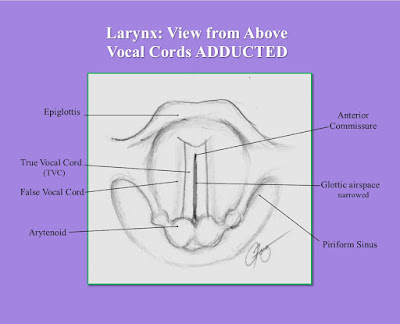 Changes to the voice are heard as hoarseness (harsh or rough quality), raspiness, decreased projection or loudness, weakness, tremor-like quality, or a gravelly (think of mucous moving on the vocal cords) quality.

We discussed vocal nodules on a prior post.  We’ll go into the variety of other causes for voice problems in the future.  In the meantime, be kind to your larynx—it’s a wonderful organ, especially in its silent state for some people.  Rest it regularly and don’t abuse it with unnecessary screaming or cringeworthy singing, particularly if you see people covering their ears and clenching their teeth, or hear cries for mercy, begging you to stop.