The Ear Exam: More than Another Entrance into Your Head 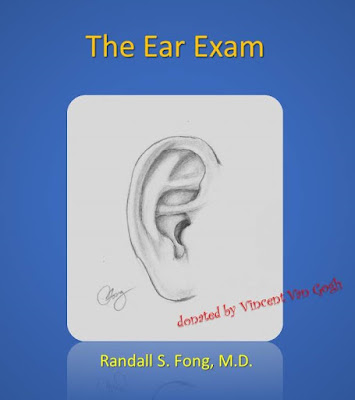 During a routine physical exam, your doctor may take a hold of your ear and place a lighted device deep into it.  Fear not, it is not a tool of torture but an effective means to peer deep into your ear.  And despite what you may or may not have heard, your doctor cannot see clear to the other side no matter what your old man told you during your impressionable childhood.

First of all, the most obvious ear structure is the auricle shown in the picture above, the funnel-shaped skin and cartilage structure with several functions:
1.  It condenses sound energy down into the external auditory canal (the dark hole leading from the auricle deeper into the head to stimulate the inner ear (cochlea) which then transmits sound signals to your brain.
2.  It’s a nifty appendage to show off your fancy, expensive jewelry, and
3.  It serves as a potent disciplinary device:  our 5’1” Japanese mom would reach up and yank our ears if we were misbehaving as teens.  This was very painful, left no incriminating marks and was very effective in righting us from our various wrongs.

Disclaimer: the drawing is really not from Van Gogh’s self-severed ear.  That would be really totally tasteless.  Actually, my daughter served as a model--relax, it is still attached firmly to her head as we speak.


The otoscope is the device that illuminates far into the ear canal.  The deeper parts of the canal and the ear drum (tympanic membrane, which we’ll abbreviate as “TM”) are easily viewed.  Numerous structures can be viewed as noted in the figure below.  I won’t get into the gritty anatomic details here only to say that ENT docs divide the TM into quadrants, which helps us describe locations of findings on the membrane.  You’ll also notice a tube and bulb attached to the otoscope.   This allows insufflation of air into the ear to check for movement of the TM.  Fluid, a thick TM or a mass behind the TM prevents movement.   The diagram below also shows where we ENT docs usually check for movement, usually most obvious in the posterior-inferior (P-I) quadrant.

Beyond the tympanic membrane are a variety of structures which we described in prior posts.  I won’t belabor the deeper anatomy, but the figure below shows some pertinent features. 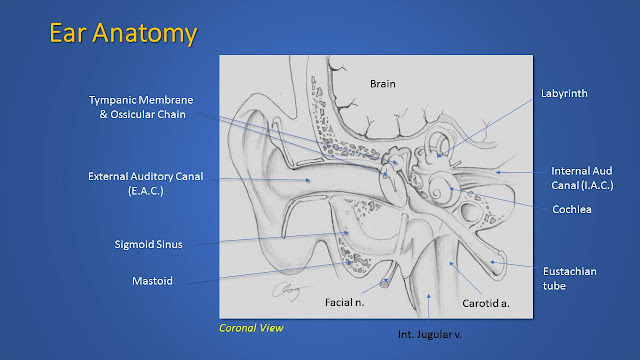 So your doc is not playing games by poking your ear with a lighted device and blowing a bunch of air into it, although it is quite fun to see a highly mobile TM in action.  Yeah, I need to get out more if such a trifle thing is amusing.  But as I’ve said before in prior posts, ENT docs have a warped sense of humor.  So take it as it is.