Hearing and The Physics of Sound Mechanics 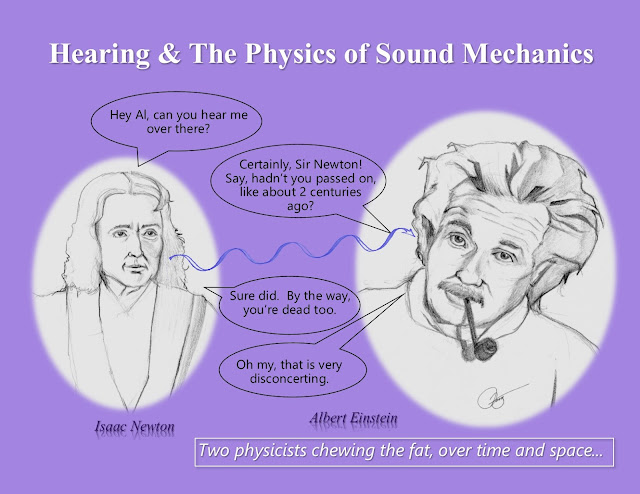 Hearing is important.  You’ve likely heard from your mom, “Listen with your ears, not your mouth.”  Your spouse or some other wise guy might’ve said this more than once during your less gracious moments.

One day your spouse drags you (by your ear no less) to the doctor because of the exact problem above.  She claims you don’t pay attention when you should, don’t respond when you should or speak when you shouldn’t.  The complaints vary in type and number, but you get the point.  So your doctor, in order to dispel further intra-marital distress and possibly save your marriage, may evaluate your hearing.

Naturally, hearing requires one to receive and interpret sound.  But what exactly is sound?  Ever think about that?  I lie awake in bed pondering this stuff.  Or maybe it was the coffee at 10 pm.

We’ll talk about how the ear receives and processes sound and the different methods to test hearing in future posts.  This article discusses the actual physics of sound mechanics.

I know what you’re thinking: “Physics?  Are you kidding me?  Are you trying to lose your audience?  Shoot me now!—it’s more merciful than Death-By-Boredom!”

I’ll try to keep this simple and entertaining, though for some folks, physics is synonymous with boring.  I personally find physics fascinating and far from boring, but I’ve been told my mind functions in ways nature never intended.

So let’s get to it.  A beer or two usually enlivens topics of an academic bent.  So instead of cringing, crack open an ice-cold one.

Sound is created when something vibrates.  The vibrating body (i.e, the source of the sound) creates forces which in turn causes the medium around it to vibrate.  A medium is defined as any intervening or surrounding substance through which a force acts.  This requires the presence of molecules, tiny particles of mass adjacent to one another.  Air is considered a medium since there are various molecules that comprise air (oxygen, nitrogen, carbon dioxide and the like) much like a soup, a really thin soup.  Air is not just empty space.

Sound moves by the vibration of molecules in a medium such as air from one place to another.  The force created by the sound source is passed to the air molecules next to it, causing them to vibrate.  These vibrating molecules then pass the force to other adjacent molecules, which in turn passes it to their neighbors.  This continues until these vibrating forces ultimately strike the target, which in this case is the ear.

Surprisingly, air is considered a liquid though it’s not as dense a water.  Yes, sound travels through water.  Whales and dolphins communicate by transmitting sound through the ocean.  Submarines use sonar (which utilize sound waves through water) to locate objects around it.  Sound also travels through bone, where molecular forces are transmitted from various molecules that comprise bone.  You can hear sound transmitted through your skull, no matter how dense you’ve been told you it is.  You can also hear sound transmitted through steel, such as a railroad track, and by placing your ear on a track, you could hear an approaching train that is miles away.

Sound cannot occur in a true vacuum, where there are no molecules.  There is no sound in outer space.  Us older folks might recall the ad for the movie Alien in the 1970s.  The caption was, “No one can hear you scream in space.”  This is true.

This topic might get a bit technical, but please bear with me.  The forces generated by the sound source creates a phenomenon called pressure.  Pressure is an abstract concept and is defined as the total force over a given amount of surface area.  The mathematical equation (for those physics purists) is

Sound is created by a pressure wave that oscillates from the sound source through the medium (we’ll use air in this case) to the ear drum (tympanic membrane).  A wave is a description of this oscillation or vibration.  A single wave of sound consists of varying pressures, where on one extreme is a maximal amount of pressure (the peak of the wave) and the other a minimal amount of pressure (the trough of the wave).  These peaks and troughs are depicted in the Figure 1.  In the middle of the wave is the resting state, which we’ll abbreviate as P0 (P is used in physics as a mathematical symbol for pressure, and the subscript “0” is—you guessed it—"zero”).  However in this case, P0 is not zero pressure.  P0 is atmospheric pressure or the normal pressure all around us in a resting state.  If P0 was actually zero, we’d be in a vacuum, a state where there are no air molecules.  Again, sound cannot travel in a vacuum, and we don’t live in a vacuum, though I’ve been told during my youth there exists one between my ears.

The +P and -P in the figure are relative to the resting or atmospheric pressure, P0.  Thus -P means pressure that is below or lower than P0 and +P means pressure that is greater than P0.  By the way, atmospheric pressure is 14.7 pounds per square inch (PSI).  This is the amount of force (measure in pounds) per unit of surface area (square inches).  Again, pressure is defined as a ratio, force divided by surface area.  Thus, P0 in this case would be 14.7 PSI.

O.K., let’s run through this with an example.  Two physicists walk separately into a bar.  Sir Isaac Newton arrived earlier and is sipping a beer when his pal Albert Einstein walks in.  When sound is created, say when Sir Isaac yells to Albert Einstein from afar, Isaac’s vocal cords vibrate. The vibrations are then passed along to the molecules in the air surrounding his larynx (“voice box”) in all directions.  The vibration creates an oscillating pressure wave, where at first pressure created by the sound is greater than P0.  As the wave travels away from Isaac's larynx, the pressure decreases until it is the same as P0, then decreases further so that it is lower than P0.  The pressure then increases again reaching P0 and then increasing above it. The wave travels repeatedly in this fashion, with peaks and troughs, over and over again, (much like my 3-year-old son with his many questions back in the day) in this cyclic fashion until it eventually reaches Albert’s ear.  Think of sound as travelling in a repeated crescendo/decrescendo pattern (i.e., up and down, up and down, etc., and keep your mind out of the gutter).

Now that we’ve bludgeoned that topic to death, let’s move on.

A wave has two important features: amplitude and wavelength.  Amplitude is the height of the wave or intensity of sound energy; the taller the amplitude, the greater the intensity and the greater the loudness of the perceived sound.  Wavelength is the total distance (in fractions of a second) that one complete cycle travels.  A cycle starts at P0 , increases to reach its peak (the maximal height of the wave) where it crests and then decreases, reaches P0 and decreases below P0 to its lowest level (the trough of the wave).  After it hits the trough, it increases again towards P0.   This journey is one complete cycle, as Figure 1 shows.

The number of wavelengths travelled in fixed amount of time (one second) is termed frequency.  Frequency is the number of cycles per second, a cycle being one full wavelength.  As you can see in Figure 2, there is an inverse relationship between wavelength and frequency: the longer the wavelength, the lower the frequency; the shorter the wavelength, the higher the frequency.  The speed of sound is 767 MPH, which remains constant, no matter what the frequency or amplitude of the travelling wave.  So, if you reduce the wavelength, you’ll have more waves in a particular stretch of time.  This increases the number of waves that travel in a second and therefore increases the frequency.  If you increase wavelength, you decrease frequency.  Frequency is also known as “pitch.”  So higher frequencies are the same as higher pitches.  Women, children and a nice scratch on a chalkboard have higher frequencies (more treble sound quality) compared to the voices of men, tenor singers, or that annoying teenager with the booming subwoofer pounding from his car (more bass sound quality).

The unit for frequency is Hertz (abbreviated Hz).  This is not the same Hertz as the rental car company nor is it the type of pain you’re no doubt feeling at this moment reading this post.  One Hz is equal to one cycle per second.  So 4,000 cycles/second is the same as 4,000 Hz.

To summarize: sound requires molecules that are propagated from the sound source to the target through the medium of air.   This creates a pattern of vibrating or oscillating pressure changes that travel to the target, and that target is your ear.  From there sound energy is received by the ear, where it triggers a bunch of interesting physiologic stuff and then delivered to and processed by the brain to create meaningful information.  Well talk about this in the future.

Hopefully I haven’t lost or bored you to this point.  How could a discussion featuring such chaps as Newton and Einstein be boring?  I’ll be satisfied if you’re still awake and the beer you might’ve guzzled is the source of your drowsiness.  Now would be a good time for a double expresso.   Physics tends to do this--that is, drain one’s energy.  No doubt, there’s a physics theorem or mathematical equation for such energy-sapping activities interesting only to physicists and masochists, which we’ll not endeavor to explore for the sake of death-by-boredom prevention.  See you next time.