Foreign Bodies in the Nose or Throat: A Looming Choking Hazard 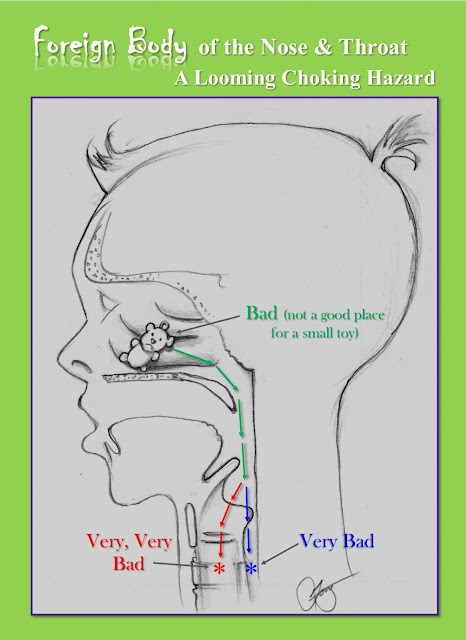 Small objects are a bane to those of us in the ENT profession.  Foreign bodies (herein abbreviated FBs) find their way into the most unusual places: in the child’s ear, nose or throat, or worse, farther down in the esophagus or into the trachea.  I’ve found a myriad of stuff, including small toys, coins, parts of jewelry, disc batteries, bugs ranging from parts of a fly to an entire cockroach (with all six legs present and accounted for), foam from discarded furniture, and large pieces of food.  The caveat here?

KEEP SMALL OBJECTS AWAY FROM CHILDREN!

The U.S. Consumer Protection and Safety Commission (CPSC) bans the sale of toys to children under 3 years old that do not meet their measurement criteria, and this is supported by the American Academy of Pediatrics.  Specifically, anything smaller than 1 ¼ inches diameter and 2 ¼ inches long (must be kept away from the child.  There is a Choke Test Cylinder created for this purpose, which can be purchased at toy stores or online.  Simply put, a toy or any part of it, cannot fit into a cylinder of those dimensions.
Round objects can more easily obstruct a child’s airway, and thus objects such as balls and marbles smaller than 1 ¾ inch diameter must be kept away from small children.

These guidelines are for children under three years of age, but I’ve seen much older children and adults presenting with real doozies, attempting to place weird stuff into their noses or swallow unusual items, much of which defies human logic.

For instance, I saw one teenage boy who, on a dare from a friend, swallowed one of those jagged plastic rings found under the cap of a large necked bottle such as one finds in a sports drink.  You’ve probably seen these things (see figure below).  The ring and cap are connected by a circumferential perforated line in the plastic.  When the cap is twisted to open the bottle, the ring separates from the cap but remains around the neck of the bottle as the cap is completely removed.

Unfortunately, this particular teenager took the extra effort to remove and swallow the over 1 1/2 inch diameter jagged ring.  It must’ve hurt like hell going down.  He didn’t fess up to his parents until the next day, after they repeatedly asked why he was constantly gagging and drooling.  He was admitted to the hospital and a GI doctor attempted to locate and remove this via flexible upper endoscopy under sedation, when he realized it was wedged behind his larynx.  Fearing airway obstruction if he tried to remove this, I was called to consult.   We moved him from the GI lab to the operating room and after he was intubated (placement of an endotracheal tube into the larynx and trachea to help the patient breath while under general anesthesia), I found the ring was actually wrapped around his larynx—technically speaking it lay sitting in front of his epiglottis in the vallecula and wrapped around each side and then behind the arytenoids.   As I removed the FB, we discovered the endotracheal tube was placed through the center of the ring!   After showing the FB to his parents and describing how it was positioned and how this could have been disastrous if it obstructed his airway, his father angrily shook his head saying, “What the h--- was he thinking?” while his mother nearly fainted. 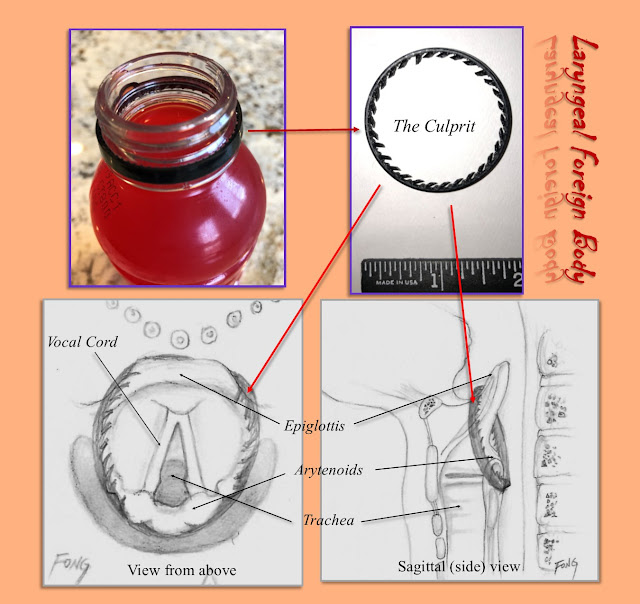 One day a six-year-old was transferred from a smaller emergency department to our local hospital for a “piece of tortilla” stuck in the back of his throat.  I could see a hint of the white tortilla behind but below the level of his tongue; it only came into view when he gagged or said “ahhh.”  Naturally, one thinks of a potential disastrous airway obstruction as this thing was sitting right above his larynx.  The child appeared quite cooperative though, and I explained to him and his parents we should try to remove the FB there in the ER rather than trying to do this under anesthesia, for we could not intubate him to secure his airway to remove this under anesthesia.  I visualized his throat with a headlight, and as I pressed his tongue down with a tongue depressor In one hand, I asked him to say a long and loud “ahhh” which lifted the FB upwards and I placed a curved hemostat on top it and rolled it forward.  It landed in the front of his mouth and we all screamed (me, Mom, Dad, the nurses in the room) “spit it out, spit it out!” which he famously did and the entire mass came out.  To our surprise, this was much larger than expected—a huge wad of flour tortilla rolled up into a tight cylinder nearly an inch in diameter and over 1 ½ inches long!  Wow.  He did well afterwards and I cautioned the parents on cutting food into much smaller bites and for that evening perhaps sticking to something safe such as ice cream and pudding.

Such cases put gray hairs on my head.

Speaking of tortillas, I saw a much older guy in his early twenties who swallowed a burrito and felt it stuck in his throat.  I thought, “hey, it’s only a burrito, it should soften and pass,” but he kept choking and drooling and his girlfriend said, “You don’t understand.  He doesn’t chew his food.  He takes a huge bite, chews once or twice and swallows."  I took him to the OR and removed an absurdly large chunk of a jumbo burrito.  His girlfriend was right.  However, it was not a total loss of his meal; some of the meat and beans fell further down his esophagus and into his stomach as I removed the mass of tortilla.  So he got to digest some of the good parts.

Nasal FBs, though less concerning as throat FBs, still have the potential of falling from the back of the nose into the throat and potentially obstructing the airway which of course could lead to death.  I saw a child who had something in her nose for a few days.  Initially her pediatrician thought it was a black crayon, but after unsuccessful attempts at removing it she sent her to the ER.  Three nurses restrained her and through her kicking and screaming I was able to remove a very large disc battery, about the size of dime.  Yes, kids can wedge awfully large things into their nose if they make a real effort.  The black color was the battery oxidizing and her nasal tissue also had black staining with erosion and necrosis.  Her poor father stood there in horror, on the verge of tears, while her mother laughed this off saying, “She’s always putting things in her nose!”  I had to reinforce keeping small objects away from her, especially caustic things such as batteries, and that if this fell farther back and down her throat or into her esophagus or trachea, the battery acid would erode the soft tissue causing severe bleeding, a perforation leading to a terrible infection, airway obstruction and death.

I don’t parse words and so the mention of the possibility of DEATH should be a big, red-light warning sign that ought to stick into their heads forever and ever…so I thought.

One late evening I removed a penny from the upper esophagus of a one-year-old boy.  After giving the parents my lecture on staying vigilant and not allowing small objects around children, how the penny could have gone into the trachea instead and cause unpleasant things such as DEATH, this same child presented not a week later to the ER having swallowed another coin.  I was not on-call that evening and was heading out of town, so the on-call ENT had to deal with this unfortunate and highly preventable event.

When very young children are concerned, the fault lies not with the child but with the parents or caretaker.  I don’t know how many times I must repeat myself but I’ll say it over and over again until I’m blue in the face:

KEEP SMALL OBJECTS AWAY FROM CHILDREN!

Mouth and Throat Nose and Sinus