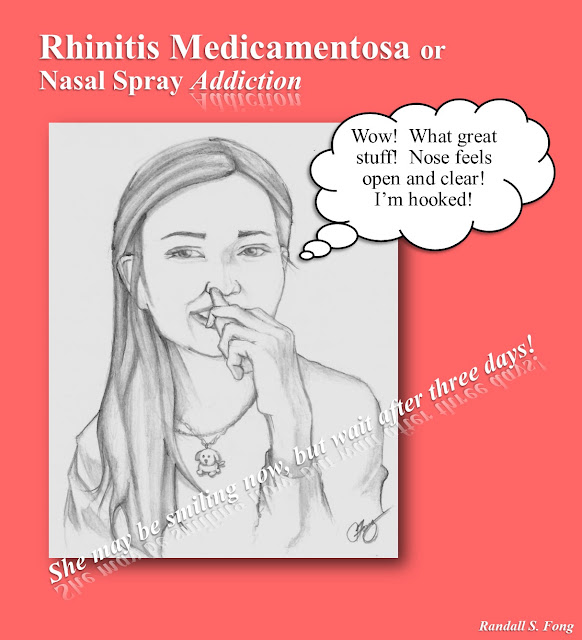 Addiction.  No doubt you’ve heard of the opiate crisis, where people become dependent on pain-killer drugs.  But did you know your nose can become addicted to drugs as well?  And to run-of-the-mill, legal stuff available over-the-counter (OTC)?

Most folks suffer a congested nose more than once in their lifetimes.  The causes are varied, ranging from the common cold to allergies.  Nasal congestion is a stuffed or plugged nose, with blockage of nasal airflow.

Aside from a mechanical obstruction from an abnormal nasal mass or altered nasal anatomy such as a deviated septum or nasal polyp, most causes of nasal congestion are temporary, a result of swelling of the soft tissues normally found in the nose.  The nasal passages are lined by layers of cells called the mucosa overlying a soft submucosa, rich in small blood vessels and capillaries.  This abundant blood flow helps keep nasal tissues moist and warm, which in turn transmits that moisture and warmth to the inspired air running through the nose.

However, the mucosa and submucosa can hyper-function.  Usually this is a result of exposure to airborne irritants such as dust or chemicals, allergens or infectious agents such as viruses.   The nasal tissues become overly swollen and engorged (congested), causing them to secrete too much.  This creates the nasal plugging the need for frequent nose-blowing.

Decongestants are medications designed to reduce nasal congestion and to improve nasal breathing, and can be done either with an oral medication (i.e., pseudoephedrine or phenylephrine) or by direct application with a spray.  There are a variety of OTC nasal sprays that work in different ways.  One particular type of spray is called a nasal decongestant spray. 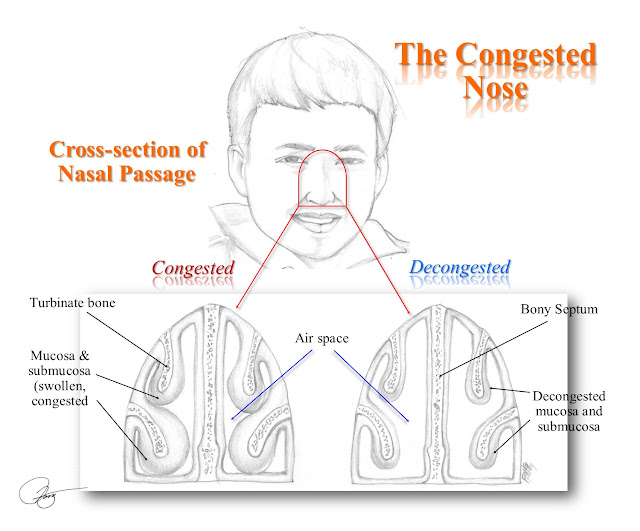 The generic names of these OTC decongestant sprays are oxymetazoline and phenylephrine.   The common brand names are Afrin® and Neo-synephrine®, respectively.  However, there are a variety of OTC sprays with different names that contain these ingredients, so in purchasing these, carefully review the fine print under Active Ingredients.

Nasal decongestants shrink the mucosa by a process of vasoconstriction.  Vaso = vessel and constriction = narrowing or shrinking the diameter of the vessel.  Hence, the blood vessels that supply the nasal tissue become narrowed to decrease blood flow to the target tissues when a decongestant is used.  The benefit of a nasal decongestant spray is the near-immediate onset of action, usually within minutes, since it is applied directly to the mucosa.

Other sprays don’t have quick-onset relief.  Nasal steroids such as fluticasone (Flonase®) or triamcinolone (Nasacort®) often take two weeks to achieve maximal effect and are meant for regular rather than as-needed use.  Chromium sodium (NasalCrom®) is a preventative allergy spray, not meant to relieve symptoms immediately, but used prior to your peak allergy season or in prior to situations where you might be exposed to allergens (i.e., going to someone’s house with cats, if you’re allergic to cats).  Nasal saline is a salt solution similar to what you normally produce in the nose, but is meant to help cleanse and moisturize and not decongest the nose.

Due to their vasoconstrictive properties, nasal decongestant sprays also help with nosebleeds.  We actually use these in the office, the E.R. and the O.R. for such purposes, or to minimize intraoperative bleeding during nasal and sinus surgery.

So nasal decongestants are great drugs for immediate relief of nasal congestion or nosebleeds.  But like a lot of drugs, there is a downside.  I’ll put it out there boldfaced and in large font:

BEWARE!!!:  These sprays are meant for short-term use only.  DO NOT USE FOR MORE THAN THREE (3) DAYS IN A ROW!  I repeat—NOT MORE THAN 3 CONSECUTIVE DAYS!

The reason for the excitement?  Prolonged use of these sprays can lead to rhinitis medicamentosa, also known as rebound congestion, where the nasal tissues no longer respond as well to the decongestant spray, becoming congested shortly after the vasoconstriction wears off.  Often the congestion from rhinitis medicamentosa is worse than the initial congestion which prompted the use of the spray in the first place.  People then become dependent on these sprays, using more frequently, as the duration of decongestion shortens.

In essence, they’ve become “hooked” or “addicted” to the spray, terms used by the very people who present to the office with this problem.  It’s also a travesty that some sprays on the market (with a variety catchy trade names) containing these ingredients provide no such warning on their packaging.

Yet, it’s difficult to stop these sprays cold-turkey.  Like smoking or opiates, it’s a habit that’s hard to break.  One means to treat this problem is to gradually wean off the spray.

Saline can be purchased OTC at most stores and pharmacies.   Some brand names are Ocean Spray, Ayr or a Neil Med kit that comes with a bottle and packets of powder you mix yourself into clean water.  You can also make your own nasal saline solution with simple ingredients (see Nasal Irrigation Instructions for a recipe for making your own saline solution)

You should also use a nasal steroid spray as directed on a daily basis while you’re tapering off the nasal decongestant spray. The nasal steroid spray, as mentioned before, can take up to 2 weeks to achieve noticeable improvement, so continue using it daily.  Your physician may also prescribe a short course of steroid pills which can have a shorter onset of action (often within 24 hours) to help alleviate your congestion during your weaning process.

Take heart.  There is hope for those whose noses have become addicted to decongestant sprays, even after years of use.  Of course, the best remedy is not to get hooked in the first place.  So keep to the front of your mind the big-time warning in big-time letters above.