Exercise with Weight Training—The Path to The Fountain of Youth

“I was just a skinny lad, never knew no good from bad...”  Brian May of Queen

That verse from Queen was me, loosely speaking.  Running cross-country and track back in high school kept me skeleton-thin.  In the high school yearbook of my senior year there’s a photo capturing me during one cross-country race.  Pencil-thin arms and spindly legs are moving about from a skin-on-bones torso, and the largest body-mass is the mop of hair blowing in the wind.  One day my young kids came upon this photo.  One offspring commented, “Gee Dad!  Were you starving to death?” while the other added, “Didn’t grandma feed you?”  Kids.  I said something to the effect like, “Hey, that was me in my glory days,” and shared some memorable high school stories but left out the parts where I “never knew no good from bad.”  That’s called good parenting. 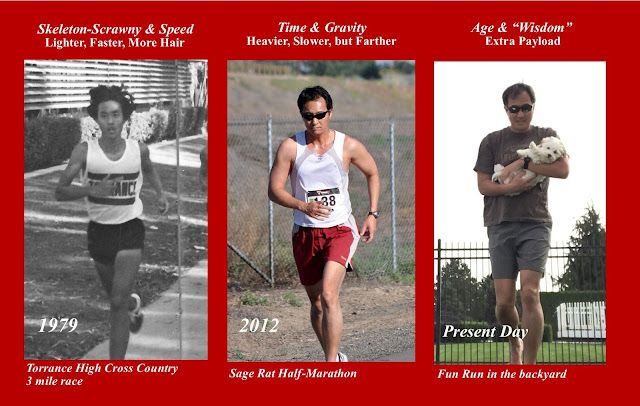 Anyway, this gets us to the topic of exercise, specifically weight-lifting or weight training, and how motivation and discipline run hand in hand.  My maximum body weight at the end of high school was a whopping 129 pounds at 5 feet 11 inches tall.  That put my BMI (body mass index) a tad low at just under 18.0 (normal BMI = 18.5 - 24).  I stood to gain some weight.   I burned a ton of calories but also ate like a pig.  I unluckily also had a small frame.  My wrists were so thin that young girls could completely wrap their fingers and thumb around them.  They’d show their friends.  These were my rare moments of popularity.  Very unflattering.

After my last track season ended that spring, I completely stopped running.  I felt chronically fatigued from 4 years of near-continuous running, often training twice a day.  It felt good not to do it.  Yet I still needed exercise.

Also I wanted to gain weight and add some bulk.  Living in southern California a few miles from the beach, skinny see-through guys like me weren’t particularly sought-after dating prospects.  Girls were only a partial motivation though.   I still lacked self-confidence.  I needed a physique that would bolster confidence since—and this is the sad truth—physical appearance mattered a great deal, especially in sunny California.

My younger brother played football and had some free weights and a bench-press nicely cramped in the small bedroom we shared.  It was a simple padded, horizontal bench with poles on each side to hold the weight bar above the body.  I’d used weight-lifting machines in the high school gym as part of our conditioning but never free weights.  As long-distance runners, the weight training was geared towards multiple reps at light weights; we weren’t aiming for the Mr. America look.  My goal was different this time, and I knew that lifting heavier weights was the key to increasing muscle mass.  I wasn’t aiming for the Arnold Schwarzenegger physique.  I wanted only to hide a few ribs.

So I began weight-lifting 4 days a week.  When I use the term “free weights,” I’m referring to simple barbell weights, with no other supports or cables between you and the bar holding the weights.  It requires a bit more balance to steady the weights as you lift them.  You use more muscle groups compared to weight-lifting machines which tend to over-isolate the worked muscles given the machine’s limited range and trajectory of motion.  Any body-builder will tell you that free weights are necessary for optimal results.

I kept the routine simple.  I used the bench-press to work the chest and arms and used the same bar for curls to work the biceps, believing this routine would work best while not going overboard.  I wanted not to spend a whole bunch of time lifting weights, since I was finishing school and working a part-time job and wanted time to play in the summer.  I started slow with very low weight.  I could barely lift 50 pounds the first time I bench-pressed, much less with curling.  My goal was to ultimately bench more than my bodyweight.  I added ten pounds a week to the maximal amount of weight I could bench.  I unknowingly adhered to what is known as a pyramid regimen, where I lifted about 6-8 reps at a very light weight, then progressively increased the weight but doing fewer reps, until peaking at my maximum weight-lifting capacity for the day, and then tapered back down.  This was the routine each day I worked-out.  Once a week I added ten pounds to my prior maximal weight from the week before.  I did something similar for curling but to a lesser extent.

I weight-lifted 4 times a week without a lapse.  The maximum bench-press weight climbed regularly until I packed every barbell my brother owned on the bar.  So I bought more weights.  I recorded my workouts in a logbook and continue to do so this very day.  The numbers, the measurable results, were the motivation to continue.  This formed the discipline.  Motivation only comes by way of action.  Weight lifting strongly reinforced that concept which I applied to other endeavors later in life.  Too many people wait for motivation to act.  It doesn’t work that way.  By the end of the summer I could easily bench 160 lbs. with a body weight of 140 lbs.  People I hadn’t seen in a while mentioned I looked healthier; some would comment, “Is that you, Fong?  Holy ___ (enter your favorite expletive here)!”

Yes, I succeeded beyond my hopes and continued to progress, though the maximum weight I could bench increased less frequently.  I used the college gym afterwards and later purchased Olympic style free weights and a larger, sturdier bench-press during medical school in the late 1980s.  Eventually, I could bench 275 pounds, while weighing under 160 lbs.   My regular routine included benching 4-5 reps at 225 pounds.  I didn’t look particularly muscular or buff, but more like a “regular guy” and no longer like a stick figure. 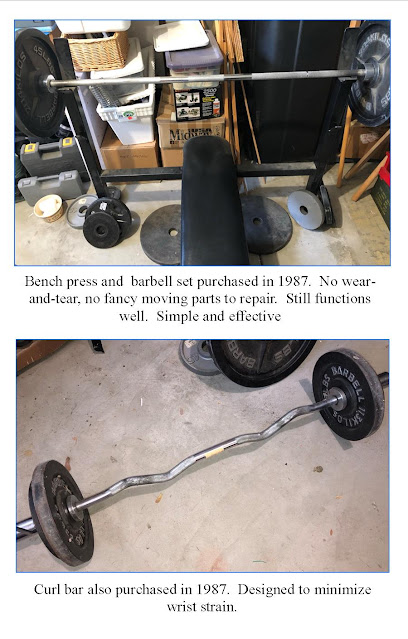 I still use those same weights and bench-press after all these years, though they’re parked in the garage rather than the bedroom--unlike my little bro, I wisely assumed my wife Nancy wouldn’t fancy weight-lifting paraphernalia in the boudoir.  I lift much less poundage compared to my youth though I can easily bench multiple reps at my current body weight.  I can still curl ten reps at 90 pounds.  I installed a simple bar in the garage to do pullups and use this regularly as well.  Weight training is easy to do since it’s all right there.  It takes 20-30 minutes to do a workout—less time than driving to and from a gym.

I’ve been regularly weight-lifting for so many years that it’s become a habit.  This complements my main form of exercise which is running.  Weight-lifting prevents loss of muscle mass as we age, and helps to strengthen the bony skeleton as well.  I’ve seen a few older guys in their 70s and 80s lifting more than I can now, and they look fabulous, many years younger than their chronologic age.

So exercise is a fountain of youth, in a sense.  It won’t subtract time from your age, but it certainly makes you feel better, with a pleasant, “pumped-up” endorphin-laden haze.  It just might extend the years in your life, but more importantly, add life to your years.  It’s also a remedy for the starved-skeleton look in guys like me.  Remember that motivation only comes by way of action, which forms the discipline, which then creates the habit.   And habits are hard to break.