The Vestibular System: Form and Function 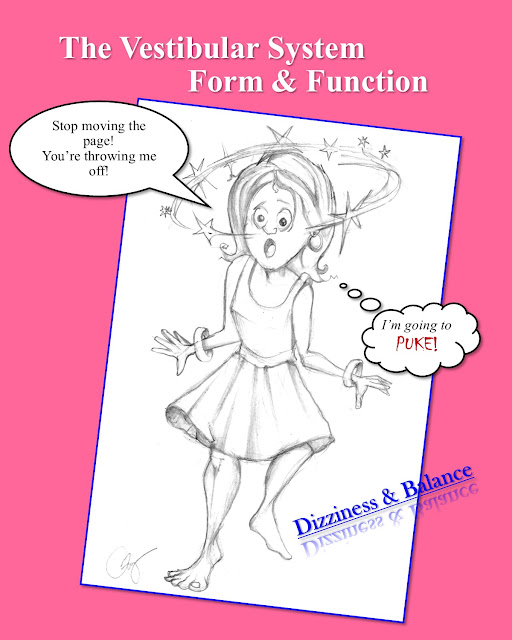 Dizziness and balance problems often stem from the vestibular system, a complex arrangement between the brain, a bunch of nerves and some other bodily organs.  Understanding the mechanisms behind a disease goes a long way in a patient’s therapy.   Dealing with dizziness and balance problems require a good deal of patient participation, and the more engaged one is with the treatment plan, the better the outcomes.  You might want to read Dizziness-PreliminaryConsiderations before embarking on this article, since not all causes are ear-related.

So before we delve into the different causes of dizziness and imbalance, this post will educate you on the vestibular system, a rather complex topic, where very large books have been written.  I’ll make this as simple as humanly possible--that’s how my brain functions anyway.  I’ll use plenty of pictures, keep from word-vomiting all over the page, and hopefully add a little fun.

The vestibular system integrates input from outside of the body and delivers these messages to the brain to help the body maintain proper posture and balance.  Obviously, your body moves all the time, even while sitting still in a post-Thanksgiving turkey and beer coma.  There are three major peripheral input systems: 1. labyrinthine, 2. visual and 3. proprioceptive.

Let’s briefly touch on the last two first.  Visual input is as plain as it gets.  The eyes are the organs that send whatever you see to the brain.  Visual cues about the environment around you is super-important—you don’t want to bump into a wall or step on your cat (who notoriously won’t move no matter what comes their way) or fall off a cliff since you can’t see what’s coming.  Visual cues also prepare the body ahead of time for any change in terrain, to veer around obstacles, etc.  So good vision is ultra-important as you can imagine.  Proprioceptive input relies on joint receptors located throughout the body.  These receptors sense the body’s position in space relative to gravity.  Information from these joint receptors are then sent to the brain.

This leaves us with the topic the labyrinth.  This nifty organ gets its name from the maze of fluid-filled channels and canals located within solid bone deep to your eardrum.  The labyrinth has two components:

1.  The cochlea: a snail shaped fluid-filled coil responsible for hearing.  It receives sound input and converts this to electrical signals transmitted by nerves to the brain (see Hearing and How the Ear Processes Sound).

2.  The vestibule: a fluid-filled organ that sits behind the cochlea.  It consists of circular canals and sacs, responsible for sending signals whenever the head is moving.

For more subdivision fun, the vestibule is further divided into:

1.  The utricle and saccule.  These fluid-filled sacs sense linear movement of the head or movement in straight-line fashion (i.e., up and down, side to side).

The bony labyrinth is lined with a thin membrane.  Figure 1 shows the labyrinth organ removed from its bony encasement (hence the name, membranous labyrinth). 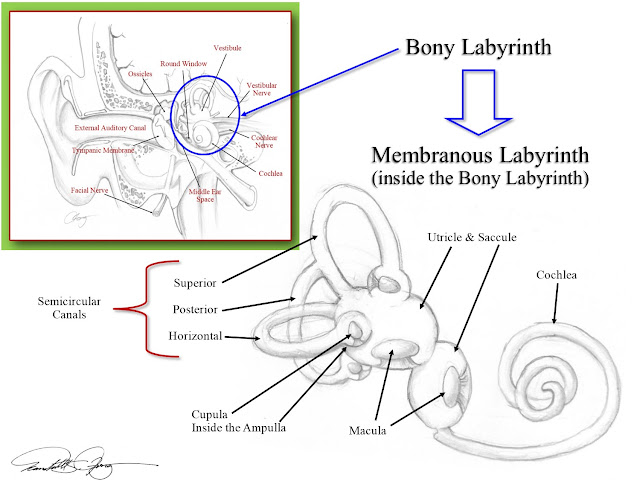 THE UTRICLE AND SACCULE

These utricle and saccule are two fluid-filled sacs responsible for sensing gravitational and other linear movement.  Within each is an organ called the macula.  The macula is a gelatinous oval structures that rests on top of a bunch of tiny sensory neuroepithelial cells colloquially called “hair cells.”  These “hair cells” do not contain hair per se, but are long, thin structures called cilia.  The cilia (“hairs”) extend from these cells and enter deep into the gelatinous macula.  As the macula moves due to head movement, these cilia bend accordingly.  The macula of the utricle and saccule lie perpendicular to one another, meaning at right angles or 90 degrees from one another.  Dispensing with the math lingo, let’s just say the macula in the utricle moves in a horizontal plane—back and forth, and left to right.  The macula in the saccule moves up and down and also side to side in a vertical plane.  You can see, all planes of linear movement are covered by these two organs.

The macula is also covered with tiny calcium carbonate crystals known as otoliths (where “oto”  =  ear and “lith”  = stone).  These give weight to macula, allowing it to move when the head moves (and the rest of the body, unless you’re decapitated, but then you wouldn’t care a hoot about this topic since you’ll have much more important matters on your mind) in in linear (straight-line) fashion.  This causes the macula shift.  This shift then bends the cilia of the hair cells.  The hair cell activates a neuron (a single nerve cell) which then leaves the vestibule, joins a ton of other neurons from other hair cells which ultimately form a nerve.  This nerve (a branch of the vestibular nerve) then travels to the brain, sending  signals which the brain processes and interprets, then uses that information to signal other parts of the body, telling them, “hey, the head and body are moving to the left.  So adjust and prepare for that movement, ‘cause we don’t want to trip and fall and get a brain injury, ‘cause that’s me!”

Now you may guess the brain really doesn’t talk to itself in dialogue fashion as the above scenario suggests, but then again, your brain might be strangely unique and we won’t hold that against you.

The semicircular canals are attached to the utricle and share the same fluid (endolymph).  There are three semicircular canals (herein abbreviated SCC), named for their position relative to the rest of the labyrinth (labelled horizontal, superior and posterior).  The position of the three SCCs are ideally placed to sense all three planes of movement.  See figure 2 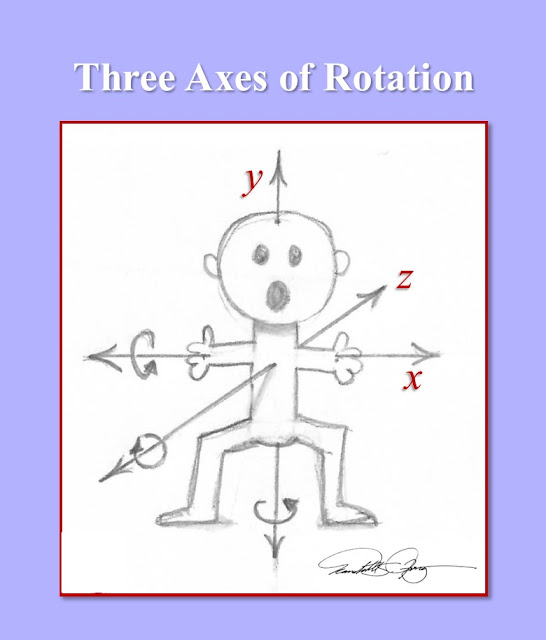 At one end of each SCC is a dilated, ball-like area called the ampulla.  Within the ampulla is a structure called the cupula, which is similar in composition and function to the macula.  It too is gelatinous but has a more elongated shape but it doesn’t have the otoconia. The cupula also sits on “hair cells” that project long cilia deep into the cupula.

When the head rotates, fluid travels within the SCC from the utricle and returns at the other end of the SCC, goes through the ampulla and back to the utricle.  When fluid moves within the ampulla, the cupula is then moved in that direction.  This bends the cilia on the hair cells which, just like the utricle and saccule, activates the hair cell which in turn stimulates neurons attached to it.  The signals travel along the neuron to the brain.  See Figure 3. 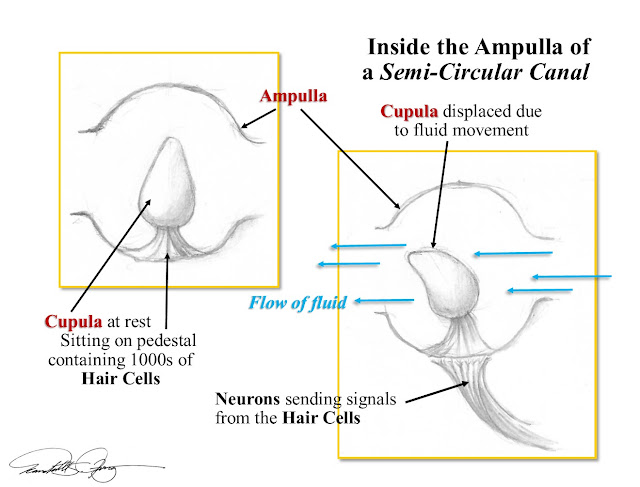 You can say the cupulae and maculae (the plural forms of those words) act as tiny “switches” that are activated depending on how the head and body are moving or rotating.  When movement occurs in the plan of that particular organ, it is then switched to the “on” position so to speak, and sends signals depending on the direction of fluid flow.  Technically speaking, the rate of fire of the neurons changes based on the direction these tiny organs are shifted, which gives the brain the proper information about direction and speed of the head movement.

I’ll write more about this topic in the future, particularly as it relates to the causes of a variety of dizziness and balance disorders.  But for now, all this writing and drawing is making me sleepy, and I’ve had neither tryptophan-ladened turkey nor an ounce of beer.  See you next time; I’m taking a nap.