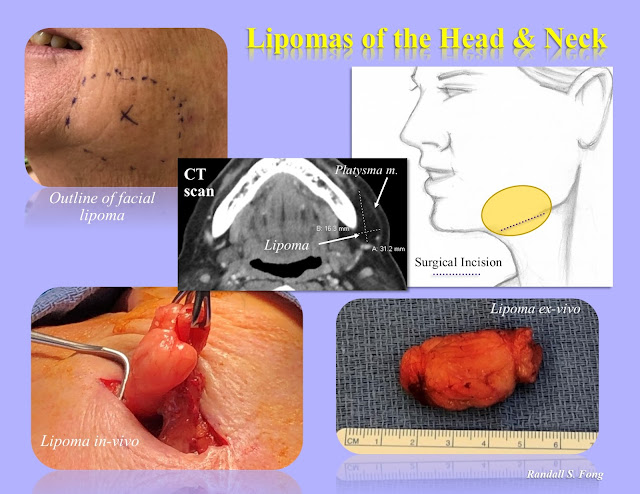 A lipoma is a benign fatty tumor.  Lipomas typically do not have the potential to convert into a malignancy, but they can increase in size, leading to disfigurement or sometimes pain and discomfort depending on their location.

On the surface, lipomas appear easy to remove.  They are squishy and soft and seem to lie just beneath the skin’s surface.  But beware of first impressions (which also goes for dating too, though for me it’s been a long, long time…).  Given their noninvasive nature, you’d think lipomas ought to shell out nicely, if it were not for meddlesome stuff such as different tissue planes, nerves, blood vessels and the like.  Lipomas of the face, head and neck pose particular challenges.

Take the title picture above.  Lipomas often are superficial, meaning they usually are just below the skin and subcutaneous fat underneath the skin.  However, this lady had a lipoma on the lower face, deep to that thin sheet of muscle that covers most of the lower face and neck called the platysma.  The CT scan (imagine looking upwards at the neck and face from below) shows this—compare it to the opposite normal side.  Branches of the facial nerve however run just deep to that muscle.  Searching for nerves is challenge #1.  Challenge #2 is cosmesis, a fancy term for “don’t make an ugly scar.”  Incising directly over the center of the lipoma is the easiest approach, but this places the incision directly on her face, and no matter how cool Al Pacino was in the movie Scar Face, she didn’t want to be mistaken for a cussing drug dealer.  And so the better location is just under the jaw or mandible; incisions in this site camouflage quite well and blend better with natural skin creases.  Once the incision is made and the lower surface of the lipoma is identified, the incision and soft tissues can be retracted upwards for better exposure. Surprisingly, she was one of two patients within a month upon whom I operated with a lipoma in this same spot.

Speaking of nerves, the next patient had a lipoma on the side of his face and head which was causing pain especially when lying on the same side.  It also was getting more visible and he wanted it out. 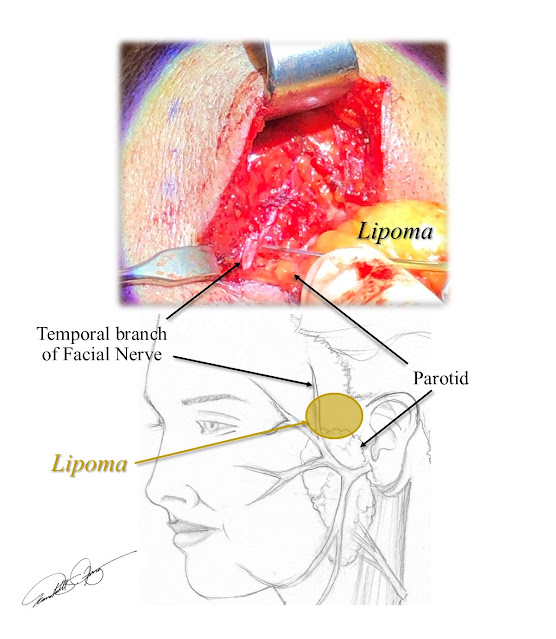 Careful dissection revealed a branch of his facial nerve deep to the lipoma. The temporal branch helps to close the eye and move the forehead.  There is also a zygomatic branch nearby that aids in eye closure.  Even when identifying and preserving nerves, I tell patients there still is a risk of nerve weakness since dissection on a nerve can cause neuropraxia, where the nerve it doesn’t transmit signals as well as it should due to it being manipulated.  Fortunately, he had no facial weakness and no problems with eye closure. 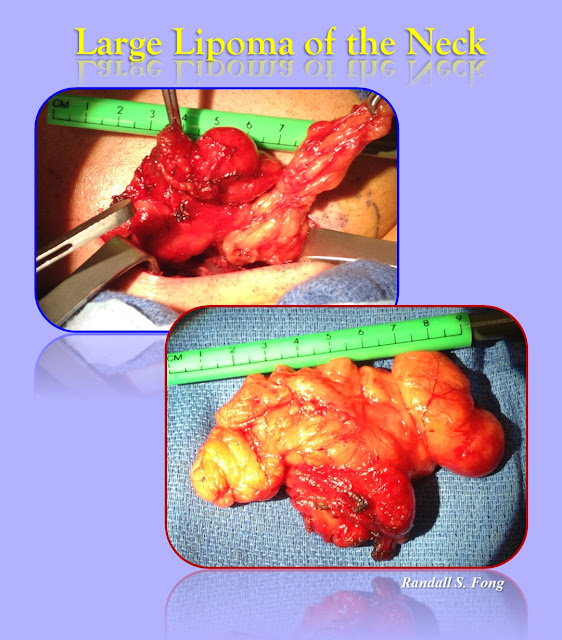 The last case in the photo above was a whopper of a lipoma.  This baby was 9 cm (3 1/2 inches) long, up against his submandibular gland (the salivary gland below the jaw) and deep to the marginal branch of his facial nerve.  This nerve had to be carefully lifted off the lipoma.  The lipoma also extended back and had to be carefully dissected off his internal jugular vein.  He had this thing for several years, it was obviously noticeable, and his wife of a few years was displeased that he hadn’t had this thing removed before (but married him anyway).   In fact, she came with him to his preop appointment so he wouldn’t dally and head somewhere else. 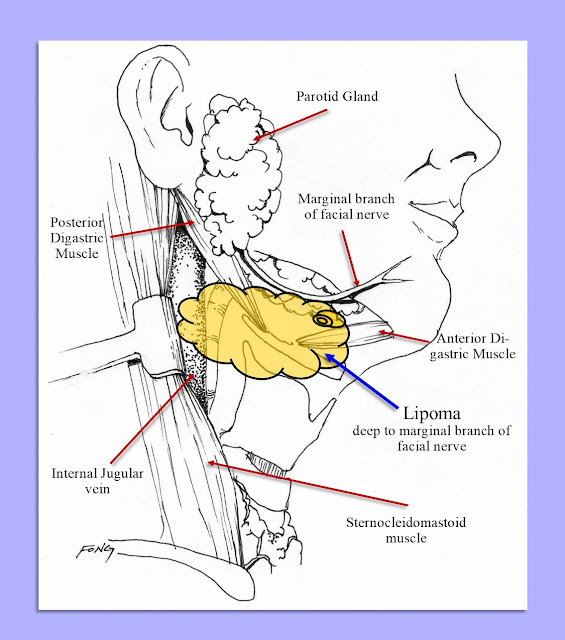 As every surgeon knows, removing anything from the body, no matter how simple it may seem,  requires a proper assessment of the problem, good preop preparation, a thorough knowledge of relational anatomy and careful, meticulous surgical technique, which is the reason med school and residency are so darn long.