Cancer of the Tonsil: A Surgical Approach with a Mandibular Swing 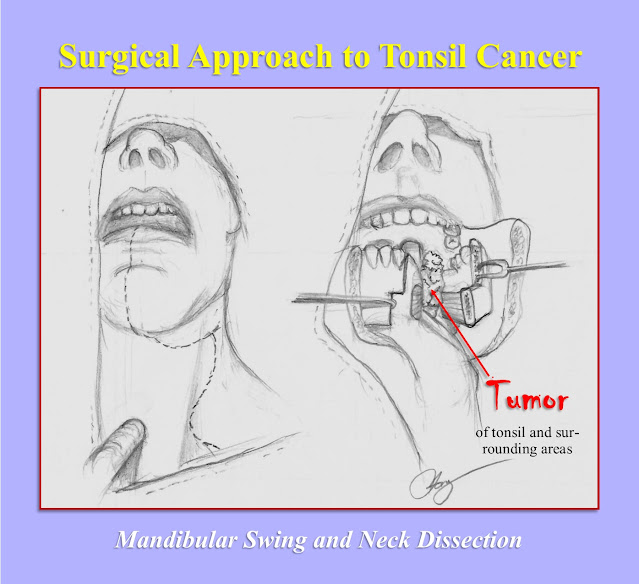 Cancer of the tonsil or tonsillar fossa (the area where the tonsil resides) and surrounding areas can be quite difficult to treat. Given its location in the back of the throat, behind the tongue and above the larynx, along with its rich lymphatic drainage to lymph nodes in the neck, surgical treatment must focus not only on the primary site and surrounding sites but also to the neck.  Surgery requires removal of the tonsil and also tissue around it and deep to it and also portions of any other structures that might be involved such as the base of tongue or larynx, depending on the extent of the tumor. Given the risk of lymph node involvement is also very high, a neck dissection is also required. A neck dissection involves removing soft tissue encasing the too numerous-to-count lymph nodes and interconnected lymphatic channels in what we call an "en block" fashion. One cannot simply pluck out individual lymph nodes since many are too small to be seen and most are too small to locate, and such a method is highly ineffective or nearly impossible anyway.

As the operative photo blow shows, surgery can be quite extensive and quite lengthy.  I’ll describe one approach.  This was a patient with a malignant tumor (i.e., cancer) of the left tonsillar fossa that extended lower in the throat.  He also had two enlarged neck nodes that were obvious on his physical exam. 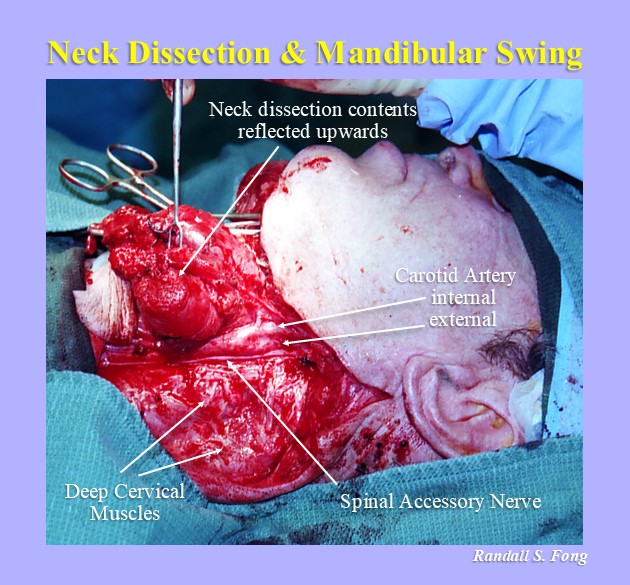 For this particular patient, first a tracheotomy to protect the airway for the surgery but also during the postoperative period.  The neck dissection was performed first by removing the internal jugular vein and the sternocleidomastoid muscle in this case given he had several large obvious lymph nodes attached to the muscle and the vein. All the fatty soft tissue deep to the muscle and around the vein are removed en block, peeling the tissue off the carotid artery. The spinal accessory nerve, responsible for movement of the shoulder, was preserved.

The neck dissection was then continued upwards. In order to access the tonsillar region where the cancer is located, the incision is carried up into the chin and through the lip. The lower lip is incised or split, and the two ends are retracted away from one another.  Next bone cuts are made in a stair-step fashion in order to split the mandible, and its two ends are retracted outward. Soft tissue along the floor of the mouth next to the tongue is incised medial to the mandible.  The mandible is further retracted laterally or outward performing a "mandibular swing" which then provides good access to the primary tumor. Incisions are made well around the tumor and deep to it. 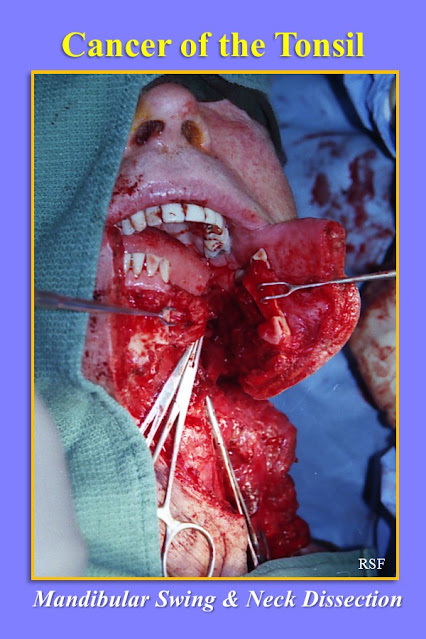 The tumor is then removed in-continuity with the neck dissection, which removes the intervening lymphatics between the primary tumor and the neck lymph nodes.  Margins of tissue around and deep to the tumor site are sent to the pathologist who freezes this tissue and checks them under the microscope (what we call frozen-section margins) to evaluate for any residual tumor in the margins.  If microscopic cancer is found, additional margins of tissue are removed until they are cancer-free.

Sometimes reconstruction is needed with either a pedicled flap or a free tissue transfer. Fortunately in this case we were able to close the defect primarily in a watertight fashion. The soft tissues of the neck are then reapproximated, the mandible is placed in its proper position and secured  by small titanium plates.

This particular case was done years ago when I was considerably younger, had much more stamina and less gray hair. Fortunately, nowadays there are other nonsurgical treatments that are highly effective. With the advent of radiation therapy with concomitant chemotherapy, the cure rate is quite favorable without the need for aggressive surgery.   Oftentimes patients with more advanced disease require radiation therapy post-surgery anyway.  So treating in this fashion upfront may eliminate the need for surgery.

Surgery is then reserved after chemoradiation therapy for those whose cancer does not respond completely to chemoradiation or for recurrence of cancer later.  And there are other surgical approaches such as robotic surgery that can reduce the extent of surgery.

Causes of cancer of the tonsil or tonsillar area are smoking and heavy alcohol use. A combination of the two multiplies the risk. In addition, human papilloma virus or HPV is another causative factor. However, patients who are non-smokers and non-alcoholics with HPV positive cancers have a more favorable prognosis with better rates of cure..

For more discussion on neck masses and cancer and a surgical photo of a completed neck dissection, check out Neck Mass:Not Every Lump is A Tumor, But…It Might Be.

Despite aggressive surgery patients can often have a good result, both in curing the cancer and the post-op cosmetic appearance is actually quite good. And there is hope to lead a prolonged life afterwards. The surgery done on this patient was back in 1998 and he is still alive and rambunctious as ever.