People often present to ENT docs complaining of phlegm.  “Hey doc, I have all this phlegm in my throat.  Been happening for years and years.  I want this fixed.  Now.”

Oh brother.  Resolving a problem that’s been present for years is like cleaning tarnish from a load of silverware that's been stored away for half a century or scraping barnacles from an ocean liner sitting in seawater for decades.

I’m not trying to belittle another’s problem—that would be cruel.  But some folks must understand there’s sometimes no immediate cure for chronic, nonlife-threatening symptoms.  This post will describe the problem and provide some remedies, if you can ignore the "yuck" factor.

What’s phlegm anyway?  And how did this person make it to my office?  Just kidding on the last insensitive remark, but a touch of humor—ill-conceived as it may be—helps to lighten the mood and makes the mind more receptive to advice.  At least that’s the way my simple thinking works.

When people complain of phlegm, they’re describing mucous that is thick, sticky and viscous.

Your nose, mouth and throat are designed to make secretions that includes mucous.  Thick mucous is typically what most folks refer to when they complain of “phlegm.”  Secretions and mucous production are normal functions of the tissues of your nose and throat.    Drainage from the back of the nose down the throat is also normal, but most of us are not conscious of this occurring.  Secretions also are produced by your trachea (windpipe) and the bronchi, those progressively smaller tubes that branch out from the trachea to deliver air to the lungs.  Mucous also coats the rest of your gut from the esophagus to the stomach to the intestines, all the way to the anus (don’t make me explain this term).

Your body creates mucous as one component of the normal secretions lubricating your entire respiratory and gastrointestinal system (the GI system or simply your gut). The upper portion from nose and mouth to throat to trachea is collectively called the upper aerodigestive tract, a mouthful of words abbreviated as UADT.  Doctors love to truncate terminology into the shortest form possible, given the billions of medical terms and the reason for our awful handwriting.   Secretions are a combination of mucous with a more water serous fluid, along with an assortment of proteins, electrolytes and other nifty substances that help to protect the body and aid in proper respiration and digestion.  Much of this is created by saliva, and saliva is secreted by a set of major salivary glands (see figure below). 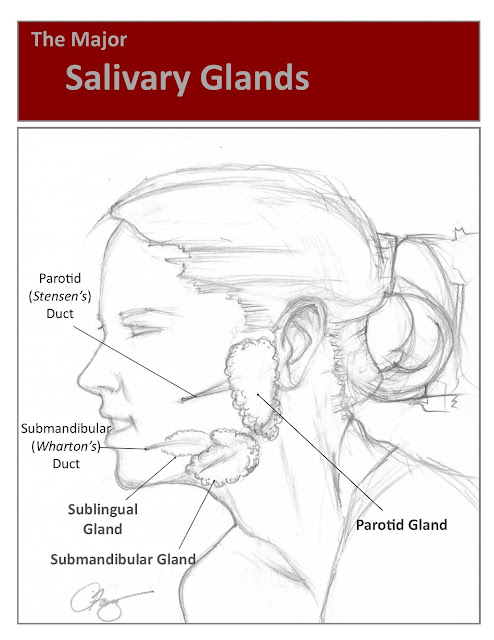 However, there are lots and lots of minor salivary glands and other secreting cells embedded in the lining tissue throughout the entire UADT.  That’s the reason the pink tissue lining the UADT and entire gut are called mucous membranes.

And so, mucous is a natural phenomenon.  It’s not bad nor a sign of something ominous.  But it can be a nuisance.

Naturally, secretion production, including mucous, increases during times of illness, such as a cold or upper respiratory illness or an allergy exacerbation.

However, some folks have this problem chronically, with no acute illness.  Reduction of saliva production or in a change in its composition make the mucosa drier and increase the viscosity of secretions.  Reduced function of other secreting cells also leads to increased viscosity of the secretions, making it more “mucousy” or “phlegmy.”

Things that can cause a chronic increase in secretion viscosity:

Consuming things that can lead to dehydration such as too much caffeine (coffee, tea, caffeinated sodas) and alcohol.

Aging: there is a natural reduction in flow and saliva composition for many folks as they age

Diseases such as Sjogren’s disease

Gastroesophageal reflux (GERD): stomach acid can inflame the tissue of the throat behind the larynx, give a sense of phlegm or the presence of something lodged in the throat (a globus sensation).

Other problems could cause increase mucous or secretion production such as nasal polyps or chronic sinusitis.  Sometimes those who feel the need to constantly clear their throats due to a sense of phlegm may once in a while be caused by a growth or lesion in the throat or larynx that the patient is trying to unsuccessfully clear off.

Naturally your doctor will check for those issues above.  A physical exam is helpful to check for tissue dryness, or other abnormal stuff such as nasal polyps, salivary gland abnormalities, or findings in the throat or larynx.  Sometimes a fiberoptic nasopharyngoscopy is needed to improve the thoroughness of the exam.

Since secretion and mucous formation is a normal function of the tissues of your nose and throat, the goal is to restore the body’s production of this to a more normal state.   Some people also describe postnasal phlegm.  Drainage from the back of the nose down the throat is also normal, but most of us are not conscious of this occurring.  However, with less saliva created the tissues become drier and mucous thicker.  but following are ways that could help reduce the viscosity (thickness) of the mucous.

1.  The nose is responsible for properly humidifying air before it enters the throat, trachea and lungs.  If it becomes dry, everything after it can get dry, leading to increased mucous thickness and “phlegm.”

Use nasal saline products to improve nasal moisture.  (ie, different brands are Ocean, Ayr,  Neil Med bottle, Neti pot): Saline solution is a natural product that is similar to what your nose normally produces.  Use 1-2 sprays each nostril 3 or more times a day to rinse and moisturize the nasal passages.  This can be purchased over the counter.   (NOTE: if having a CT or MRI of the head or sinuses, do not use saline the day prior and the day of the procedure; fluid may trap in the sinuses giving a false positive finding).

Also use nasal gel (i.e., Ocean, Ayr): apply pea-size amount twice a day to nose on both sides with clean finger or q-tip.  This can be purchased over the counter.

2.  Increase water intake.  Stay well-hydrated.  Avoid too much caffeinated drinks (such as sodas, teas, coffees) since these can act as a diuretic and cause your body to loose water.

3.  Reduce salt.  Ideally, sodium intake should be nor more that 2,000 mg (milligrams) per day.  Check the nutrition labels on the foods you eat and don’t add extra salt to your meals.

4.  Reduce fatty foods.  Especially in red meats such as beef and pork.  The fat can increase mucous thickness

5.  Trial of dairy avoidance for at least two weeks.  Eliminate all dairy products made by cows (i.e., milk, cheese, ice cream, butter, etc).  It is believed some of the mild proteins can increase mucous viscosity, even later in life.

7.  Use a humidifier at bedside. This helps moisturize the nasal, mouth and throat tissues (and especially helpful for those who sleep with their mouth open, which bypasses the normal moisturizing process of the nose).

8.  Honey might help.  There have been some studies showing the benefit of honey.  Try one teaspoon (5ml) in at least 8 ounces of water or light tea (but overdo it on the caffeine as per Instruction no. 2).

9.  You may use of guaifenesin (i.e., Mucinex™) up to twice a day, but at least 8 ounces of water.  This helps to thin the mucous, making it less noticeable and/or easier to clear.  Avoid guaifenesin or mucinex with other medications (ie, avoid Mucinex-D, or Mucinex-DM).   As with many medications, we would recommend this as a last resort and to use sparingly, even though the side effects are low.

In many instances, there is no way to completely “cure” the problem of “phlegm” creation, since is a part of a normal body function.  Hopefully the measures above will help reduce it or make it more bearable.

Mouth and Throat Nose and Sinus