September 03, 2017
No doubt you’ve heard the terms, “tonsillitis,” “strep throat, “ and “mono” mentioned by family and friends alike, many who’ve suffered through one or more of these problems.  But are these one in the same or three different problems altogether?

If you’ve read the prior chapter in Sore Throats 102, you’ll recall the palatine tonsils, adenoids and lingual tonsils are collectively called Waldeyer’s Ring (“The Ring”), an area of the throat prone to infections, and we’ll talk about some of the more common infections in this area.  Sometimes “The Ring” is simply called the “tonsils”, though most folks are referring to the palatine tonsils since they are the only visible parts of “The Ring” when one opens the mouth and looks back into the throat.

Tonsillitis is a nonspecific term for an infection of any or all areas of The Ring. Remember, -itis means inflammation, but we’re focusing only on infections causing inflammation in this chapter, meaning little microorganisms such as viruses, bacteria and fungi invading the tissues.  Most causes of tonsillitis are viral or bacterial, less so with fungi (such as a yeast infection, also called thrush).  Viral causes resolve with no treatment.  Bacterial infections also can resolve on their own, but sometimes need an antibiotic to do so.  Oftentimes your doctor or healthcare provider may do a swap of the throat—taking a cotton-tipped applicator (similar to a long Q-Tip—which by the way, you shouldn’t use in the ears since they can cause ear trauma, but that’s another story altogether) and test it for any bacteria that may be the cause. 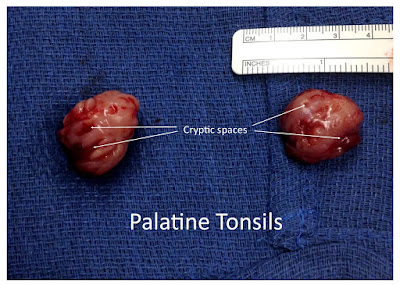 Strep Throat refers to a specific type of bacterial infection, caused by a critter called Group A beta-hemolytic streptococcus or Streptococcus pyogenes.  We’ll refer to this particular bacterium simply as “Group A Strept” for short.  When this little guy invades “The Ring, “ it can also create havoc elsewhere in the body if left untreated.  Some of the nasty complications this little guy can cause are:

Scarlet Fever: this occurs due to toxins released  by the bacterium, causing a diffuse red rash, “strawberry tongue” (very red and swollen tongue) and high fevers.

Rheumatic Fever: this can cause muscle inflammation, damage to tissues of the heart, and inflammation of the joints (called polyarthritis).

Kidney problems (called glomerulonephritis): due to inflammation and damage to the microscopic filtering structures (the glomeruli) of the kidneys.
PANDAS (Pediatric Autoimmune Neuropsychiatric Disorder Associated with Strep) which is an unusual problems presenting as tics, anxiety, obsessive and fearful thoughts.  Believed to be an immunologic reaction to certain areas of the brain triggered by the Group A Strep infection.

The last 3 complications are not really caused by the infection itself, but by the body’s immunologic response to the infection, creating unintended inflammatory reaction to those organs.

Fortunately these problems are rare nowadays due to prompt diagnosis and treatment of the offending Group A Strept organism.  There are also different types of Streptococcus and non-Streptcoccus bacteria that don’t cause the gamut of problems associated with Group A Strep.  Your doctor will often test you with a rapid strept screen, rendering whether or not you have Group A Strep in 10-15 minutes.  Sometimes a culture is sent of the swab, requiring growing the bacteria on a Petri dish(at least this was how we did it in the old days)and testing for the specific bacteria, usually taking 2 days to get a result.   Group A Strept fortunately is very responsive to antibiotics, and the bad stuff mentioned above is rarely seen these days.

Mononucleosis or “mono” is a particular type of viral infection caused by the Ebstein-Barr virus.  It is a lymphoproliferative disease, meaning it affects the immunologic system of the body which includes lymph nodes, the spleen, liver, and also The Ring which is part of this system.  That’s the reason a sore throat is a common symptom, and you’ll often see enlarged palatine tonsils with a pale, whitish-gray-yellow, dirty-ish coating (what we call a pseudomembranous exudate) .  Mononucleosis refers to the type of lymphocytes triggered in this type of infection—they’re “atypical” in appearance when seen under a microscope.  Sore throat, dysphagia (difficulty swallowing), enlarged lymph nodes in the body and especially the neck, malaise (extreme tiredness), fevers are common symptoms.  A monospot blood test is diagnostic for this disease but this test is often negative in the first two weeks.  Other tests such as a CBC with diff (complete blood count with differential) will show increased white blood cells with increased atypical lymphocytes earlier on in the course of the disease, and sometimes tests for liver enzymes are also elevated.  In many cases, the diagnosis is made by the clinical picture.  Treatment is symptomatic: plenty of fluids, pain medication (Tylenol or ibuprofen as needed), and rest.  Since the spleen and liver are part of this immunologic system, these organs can be enlarged, and contact sports (such as football or any activity where on could get hit in the abdomen) must be avoided for around 6 weeks, to avoid inadvertent injury or rupture of these structures which would require emergent abdominal surgery.  Sometimes antibiotics are given if your doctor suspects a simultaneous bacterial infection along with mono, but penicillin-type antibiotics are avoided since some patients can develop a rash with these and mono.  Steroids can also be used to reduce swelling and ease the pain and dysphagia.  Surgery by removing the tonsils does not cure the disease or hasten the clearance of the virus from the body, yet is done in cases where the tonsils are so large the patient is having difficulty breathing or severe dysphagia (ie, problems swallowing his/her own saliva).

Any of the above illnesses can be passed by saliva contact.  So avoid spreading it by spraying saliva on someone (i.e., coughing, kissing, sneezing in the direction of others, whether you’re fond of them or not) and don’t share drinking cups, eating utensils or food.  Also, throw out your tooth brush and use a new one since those little microorganisms will lay around  in the bristles, waiting to infect you again.

And if you’ve ever had all three of these infections, well…congratulations!  You’ve earned the Triple Crown of Sore Throats!
For information on surgical removal of the tonsils, check out Tonsillectomy-Indications and Tonsillectomy-The Technique.