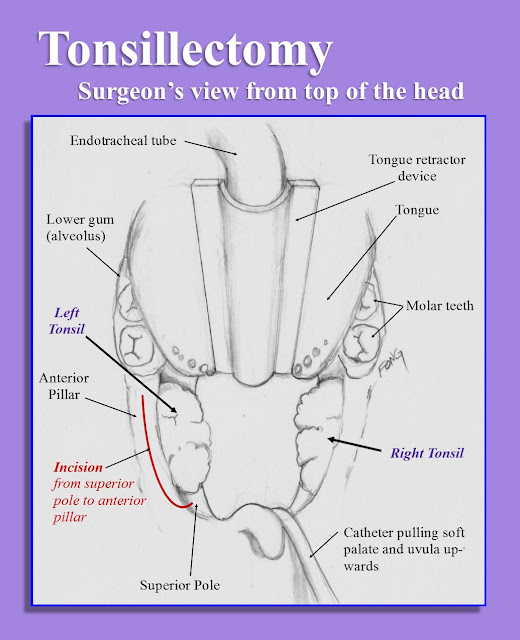 Warning: Don’t try this at home.  D.I.Y. (do-it-yourself) surgery has been known to produce very, very bad outcomes, especially when there’s no anesthesia and your instruments are on the dull side, making cutting and extracting stuff a real pain in the glutes.

The last post (Tonsillectomy: The “Why?” (Indications) and What to Expect Afterwards)
described the indications and expected post-operative recovery course.  This post describes the technique for removing the tonsils.

I’ll describe one of the most common techniques for removing tonsils, but keep in mind there are a variations to this with different instrumentation and modalities for making incisions, controlling bleeding and so forth.  This happens to be the one I typically use.  I’ve used a large variety of newer and different surgical devices (monopolar and bipolar cautery, lasers, harmonic scalpel, Coblator) but found the more classic “old-school” method works best for me and my patients.  I had higher rates of postop bleeding when using different techniques, and the degree of postop pain and requirements for pain medications was the same no matter what technique I’ve used.  Of course, we’re speaking only of on surgeon’s experience but from well over 20 years doing this surgery.

The first thing with surgery is proper positioning.  Wait--let’s take a step back.  The first thing is having the patient stable under general anesthesia.  General anesthesia, in simple terms, is anesthesia where you're completely asleep, where you are completely “under” and the anesthesia provider provides the medications and inhalation gases to keep you asleep and comfortable and most importantly, make you complete unaware of what’s going on.  To do this, you’ll have an i.v. (many times the i.v. in young children is placed after they are asleep using a mask that delivers anesthesia gases) and medication is placed into that i.v. that causes you to fall asleep.  Then an endotracheal tube is placed into the mouth and down through the larynx, between your vocal cords and into the upper trachea.  The reasons for the endotracheal tube are two-fold: (1) to ventilate or move air in and out of your lungs since you will be unable to breathe on your own, and (2)to protect your airway from blood and secretions during the surgery.

The second thing is positioning.  The patient is placed supine or lying on his/her back.  Often a shoulder roll is placed and a section of the head of the O.R. bed is angled slightly downward, all to extend the neck to provide the most optimal view of the tonsils (and adenoids of an adenoidectomy is done).  The surgeon sits or stands at the head of the bed, working from the top of the head.  To some this may sound peculiar but actually provides a more direct view of the throat.

The third item is good visualization of the surgical site.  The surgeon wears a headlight that directs light right to the surgical site.  All of this preparation provides a clear view down into the mouth and into the throat.  A device (usually a McIvor or Davis-Crowe mouth retractor) is placed into the mouth that retracts the tongue and the endotracheal tube that lies on top of it downward.  Usually the “tongue blade” portion of the device has a rounded groove that fits over the endotracheal tube, preventing kinking or blockage of the tube, which would prevent proper ventilation which, as you can imagine, is not desirable.  The opposite end of the device is then suspended on a Mayo Stand, or the standard metal tray that is supported on one end and extends to a stable stand on the floor.  A soft catheter is fed through one nostril, passed in the nose, into the nasopharynx and out the mouth in order to retract the uvula and soft palate up and forward.  This improves view of the top part of the tonsil as well as the adenoid.

Fourth is the actual surgery.  If an adenoidectomy is planned, it can be done either before or after the tonsillectomy, and I won’t go into detail on this surgery since it has been explained elsewhere (Adenoid removal (adenoidectomy): the “How” for the Inquisitive Layperson).  In incision is made with a knife of a variety of cautery devices along the superior pole and anterior pillar—smooth surfaces of mucosa located above and lateral (to the side of) the tonsil respectively.  The capsule of the tonsil is identified and then dissected or peeled away from the tonsillar fossae—the muscle lined “pocket” that holds the tonsil.  This part sometimes is more difficult in older kids or adults, particularly those who’ve had a lot of tonsil infections in the past, since rather dense scar tissue can be encountered.  After most of the tonsil is dissected away from the fossae, it is then released at its inferior (lower) attachment with a snare, further dissection or cautery.

Fifth is control of bleeding.  This is done with cautery or electrically sealing bleeding sites, typically with suction-cautery which is simply a tube-shaped device that allows suctioning of blood to improve visualization and the electrical current is delivered through the metal tube.  A Coblation device works in much the same way though has a flattened metal surface or a tiny grill-like arrangement of metal with the  suction aperture behind it.  This device irrigates with cool saline as it cauterizes.  The Harmonic scalpel also serves to cauterize and cut tissue but generates lower tissue temperature.  After or during the procedure, the tonsillar fossae are irrigated with  saline solution to rinse any residual blood and secretions and aids in visualizing any further sites of bleeding.

Sixth is resting to make sure there is no residual bleeding.  I often relax both the mouth-retractor and catheter and close the mouth for a minute or more.  Then, the mouth is opened again and the surgical sites are inspected for any residual bleeding.   I usually gently probe the tonsillar fossae to make sure there are no hidden sites that might bleed after the patient is awakened and starts drinking and eating.

Seventh is stopping the anesthesia and removing the endotracheal tube (known as extubation in medical lingo).  We don’t leave the O.R. until the patient is stable and they are breathing on their own.  The patient is then brought to the recovery room, also known as the PACU (post-anesthesia care unit) where nurses monitor and care for the patient until they are fully awake.  Sometimes parents of young children are brought directly to the PACU once the child is stable and awake.  The patient is then transported to another area (known by different terms such as outpatient department, acute care unit, postoperative unit) and often can go home after a few hours.  Nowadays we seldom keep patients over night in the hospital unless they have problems preventing discharge, which usually is due not drinking or recurrent vomiting.

I’ve already discussed the expected postop recovery course in the prior post.  However I’ll touch on a few items here.  If you happen to peer into the throat right after surgery, you might see very large gaping holes where the tonsils once resided.  These are the tonsillar fossae and can be quite deep in those patients with more deep-seated tonsils.  Rest assured, these areas will flatten out in due time as healing occurs.  Also after a few days you may notice the fossae become filled with rather nasty looking yellowish material.  Some patients and parents are concerned this is an infection, but this typically is not and merely the expected healing process.  This typically starts clearing after a week.  Also, expect the patient to have some really nasty bad breath for a week or more.  This too is normal.

Hope this satisfies that burning curiosity for those with the D.I.Y. mentality.  Once again, please don’t have the urge to try this on yourself or on someone else.  The results could be very bad, so I heard.  But who am I to judge?  I’m only a doctor.