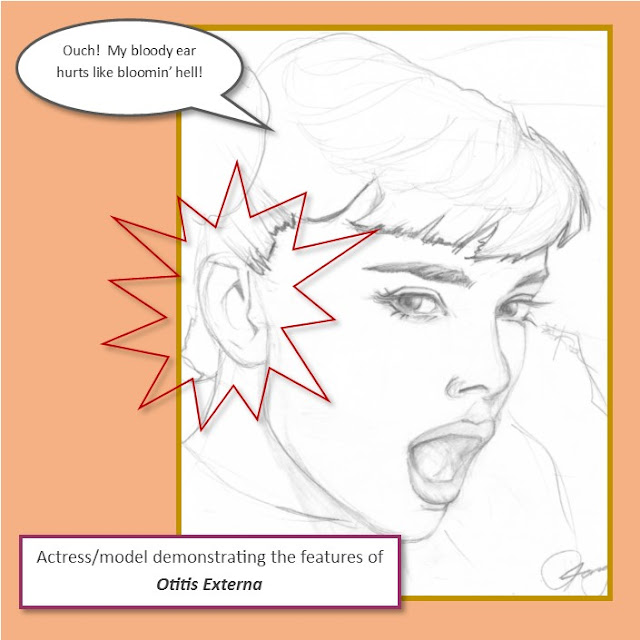 One beautiful sunny day you find your ear hurts.  It’s hurting really bad.  In fact, it hurts so bad you’re crying like a baby, even though you’re a middle-age guy.  Looking back, you were doing nothing out of the ordinary that day, other than climbing over the fence to swim in your neighbor’s pool when he was out of town.  You got a little water in your ear so you naturally cleaned it with one of those cotton-tipped swabs known as a Q-Tip.  You vaguely recall certain people telling you never to put anything smaller than your elbow in your ear.  But those were your mom, your wife, your sister—and who listens to those people anyway?  You’re a grown male, with the male tendency to do things his way.   “I did it my way!” you sing in your best Frank Sinatra impersonation.  Why listen to a bunch of females?  What do they know?  Frank never did.

Only things are getting worse, from not-so-good to bad.  As the day progresses, your ear feels plugged and even a bit painful.  A little later it goes from bad to excruciatingly bad, and you’re having problems opening your mouth, can’t even bite into that double cheeseburger, resorting to nibbling it at the edges like a chipmunk.  There’s pain in front of the ear, even behind it.  You feel pain in the neck, which rekindles unpleasant memories of your old man calling you just that: “You’re a Pain In The Neck!  Did you inherit that from your mother?”  Your ear is swollen, particularly in the hole that goes towards your eardrum (the external canal), and it hurts like hell just to move your outer ear (the auricle), i.e., when your wife grabbed it to get your attention.  Whether it’s the intense pain or the fact that eating an entire cheeseburger in your customary 3-4 bites is rendered impossible, you break down crying like the proverbial baby.  Your wife gawks at you shaking her head.  You catch her, in the corner of your eye, rolling her eyes, or so you surmise.  Unable to tolerate your blubbering and the immense pool of tears staining the carpet, she furiously hauls your sorry gluteus maximus to the nearest Emergency Room, as your time of turmoil just happens to conflict with her favorite reality T.V. show.

Ear pain can be a challenge to treat.  The doctor first must determine the cause, render a diagnosis, then proceed with the proper treatment.  We’ve touched upon otitis media previously, which is one of the most common causes of ear pain, especially in young children.

Otitis externa (also known as Swimmer’s Ear) involves the ear canal lateral (to the outside of) the ear drum, whereas otitis media involves the ear drum and the middle ear space medial (deep to) the eardrum (tympanic membrane).  As mentioned before, the suffix “-itis” means inflammation, and often inflammation with otitis externa stems from an infection—in this case, inflammation caused by little micro-organisms called bacteria.

Otitis externa (OE) is very painful, often more so than otitis media.  Moisture or water in the ear serves as a nice milieu for bacteria to thrive, sort of like a cesspool, and hence the other name given to this disease—Swimmer’s Ear.  The skin of the canal and the outer ear becomes red (erythematous) and swollen (edematous).  This area is quite sensitive to mild irritation even under normal conditions, so with OE comes a great deal of pain.  Oftentimes the ear drains fluid and even pus, which is just yuckier fluid loaded with dead bacteria and white blood cells.

Sometimes OE occurs after trauma, such as scratching the ear with something like a Q-Tip or other foreign device in an attempt to clean the ear.  Thus the reason for the sage warning, “Don’t put anything in your ear smaller than your elbow, you idiot,” or better yet, put NOTHING in your ear.

The Exam:  Typically the entrance into the ear, known as the external canal, is quite swollen, often enough to block the view of the tympanic membrane.  The ear is painful to touch, painful when an ear speculum of an otoscope (the handheld device used to examine the ear) is inserted to view the ear.  Swelling and inflammation can occur in front of the ear, around the temporal mandibular joint (TMJ) which is the ball and socket joint that attaches the jaw (mandible) to your skull, and thus the reason chewing and mouth-opening can be difficult with OE.  Swelling can also occur behind the auricle and also tract down the neck, and sometimes upwards to the temporal area on the side of the head above the ear.   Lymph nodes behind, in front and in the neck below the ear also can become swollen, as they serve as the filtering system from the ear, trying to remove the infection and also mounting an immunologic response, creating antibodies and immune cells (i.e., white blood cells, macrophages) to fight off the bad stuff.

Treatment includes an ear drop with an antibiotic or several antibiotics along with a steroid to reduce the inflammation.  If the ear canal is too swollen, the ear drops won’t get far enough into the ear to be of use.  Thus the doc may insert a “wick” in the ear, and firm piece of compressible foam that expands to about ten times its size after it soaks up moisture.  This soaks up the ear drops, pushes the swelling outward and allows the medicated drops to contact the parts of the canal that are inflamed.  Warning though: inserting the wick often is very painful, so be warned.  Sometimes this is done by an ENT doc, after the ear is cleaned and suctioned under a microscope.  Often patients need prescription pain meds or narcotics.  Sometimes an oral antibiotic (one taken by mouth is given), but the mainstay of therapy is the ear drops.  Also, you must keep the ear dry; that means no swimming, no water in the ear, and avoid any foreign objects in the ear now and in the future, FOREVER.  Use a cotton ball in the ear when showering, and better yet—place a layer of Vaseline over the cotton ball to make it water-tight.  I can’t emphasize this point enough: KEEP THE EAR DRY.

Though OE is often referred to as Swimmer’s Ear, many patients will deny having swam prior, which is often true.  The mechanism of action though is the same: a mild break in the skin, no matter how subtle, and then water (or even sweat) in the ear are all that’s needed to trigger a bout of OE.

The Lesson: Listen to the wise womenfolk around you and keep things like Q-Tips or other stuff in the ear that’s not meant to be there (unless you’re an unwise women suffering the same fate as the less-wise male).  Oh, and get to the doctor early, rather than waiting until the wee hours of the night, especially when your spouse or significant-other or parent has other plans.  You might find yourself alone, flying solo to ease your terrible ear pain.