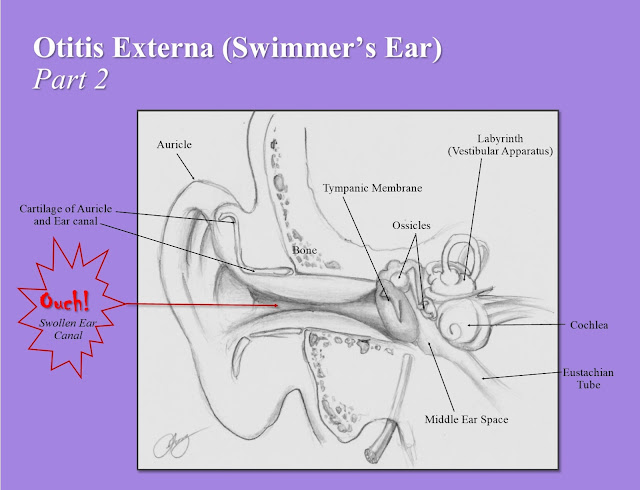 Summer has arrived so let’s talk about “swimmer’s ear.”  Also known as Otitis Externa, we’ve discussed this previously but did not elaborate a whole lot on the symptoms and treatment.  So here it is.  Sometimes otitis externa is not treated appropriately and many times patients are not aware of the precipitating factors that cause this not-too-uncommon problem.

First of all, we must distinguish between the two major types of ear infections.  Patients who present to me with the complaint of recurrent ear infections often simply state, “I get a lot of ear infections.”  What do they mean exactly?  I try to drill down on this, often asking, “Do you recall if your doctor said you had otitis media or otitis externa?  Or did they mention if you had an inner versus an outer ear infection?”  I explain this distinction determines proper treatment, as the treatment for one is entirely different than the other.

Otitis Media is an infection localized behind the ear drum, in the space known as the middle ear.  Though some lay people refer to this as an “inner ear infection,” this is not entirely correct, for the “inner ear” refers to the cochlea deep to the middle ear space; hence the “media” in the term otitis media.  An “outer ear infection,” is more appropriately termed, and thus the more official term of otitis externa.  Otitis externa includes the tissues lateral to (or outward from) the tympanic membrane (ear drum).  In both otitis externa and otitis media, the tympanic membrane also can become infected or inflamed but less often in otitis externa.

The causes of each are different as well.  In otitis media, one often has a prior cold or upper respiratory infection, or has experienced sudden changes in atmospheric pressure such as an air-flight.  This impairs opening of the eustachian tube which in turn causes changes in the middle ear, leading to inflammation, trapped fluid and ultimately an infection.  In otitis externa however, the cause is external to the ear drum, such as trauma to the ear canal or retained water or perspiration.  Hence it is often called “swimmer’s ear,” though oftentimes the patient hadn’t previously swam, but the infection is the same despite the cause.  Sometimes impacted ear wax can trigger otitis externa especially if it traps water behind the impaction or if the wax is dry and irritating the ear canal skin.

The signs and symptoms of otitis externa:

1.  Ear pain, often quite severe.
2.  Swelling of the ear canal and sometimes of the auricle itself (the outer most part of the ear).  Swelling can also extend the backside of the ear, sometimes giving the false impression of mastoiditis (infection of mastoid bone located behind the auricle).
3.  Ear drainage is sometimes noted.
4.  Decreased hearing if the ear canal is more severely swollen or if soft tissue or drainage is trapped.
5.  Pain and swelling in front of the ear, namely in the area of the temporal mandibular joint.  This can then lead to,
6.  Difficulty chewing or opening and closing the mouth.  Some patients may also notice malocclusion, where the teeth do not meet correctly, due to a shift in the mandible (lower jaw) due to swelling in the TMJ area.
7.  Enlarged lymph nodes around the ear or in the upper neck.

Otitis externa is typically caused by a bacterium called Pseudomonas aeruginosa.  Treatment centers on eradicating this particular organism.  Cultures often are not needed (unless the patient is not responding to treatment as below).  The bacteria causing most case of otitis media are entirely different (Streptococcus pneumonia, Haemophilus influenzae, and Moraxella catarrhalis are the three common bacteria in otitis media).  Oral antibiotics are required for otitis media; the antibiotic must be absorbed into the blood stream to deliver itself to the target tissue of the middle ear space which cannot be accessed by external means (unless there is a hole or an artificial tube across the eardrum).  However, otitis externa responds requires a topical (placed directly onto the involved tissue) antibiotic, often combined with a steroid, placed directly into the ear via the ear canal.

1.  Keep the ear completely dry.  Avoid water in the ear.  This can be accomplished by a cotton ball placed in the ear and then a layer of Vaseline over the outer part of the cotton ball during bathing or showering.  Also, avoid swimming or hot tubs (steam and moisture from the latter could enter the ear and aggravate the infection).
2.  Topical antibiotic ear drops, often combined with a steroid.  The antibiotic goes directly onto the target to kill bacteria and the steroid helps to reduce inflammation and swelling to hasten resolution of the infection.  Cortisporin suspension (neomycin, polymyxin, hydrocortisone) is often used and works quite well.  If a perforation in the tympanic membrane is suspected, Ciprodex (ciprofloxacin with dexamethasone—a steroid) or ofloxacin drops are often used, since these do not have the potential for ototoxicity to the cochlea (which can result in hearing loss due to damage to the cochlea) as neomycin might.
3.  Oral antibiotics are often not needed, unless there are swollen lymph nodes (in front of the ear but also can occur behind and below the ear or in the upper part of the neck) or if there is cellulitis (infection of soft tissues such as skin) of the auricle and skin around the auricle.  Rarely, patients need to be admitted for i.v. antibiotics, unless they have other comorbidities such as uncontrolled diabetes, severe cellulitis or potential sepsis (i.e. infection spreading through the blood stream).
4.  If swelling is more severe, an expandable wick can be placed directly into the ear canal.  This is a compressed sponge that when activated by fluid, expands to about 5x its original size.  This sponge pushes out the edema of the canal tissues and allows the medicated ear drops to get deeper into the ear canal and to the target tissues.  Also, since the sponge absorbs the ear drops, it allows for a more continues contact of the medication to the infected tissue.  Warning: placement of the wick can hurt like hell, but the pain eventually subsides once it is expanded and soften with the drops.  Once the swelling resolved, the wick can fall out on its own, but often the doctor needs to remove it, usually around a week later. 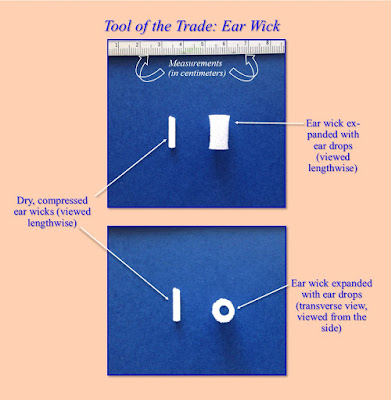 5.  Narcotic pain medication may be required.  We typically have patients use this as a last resort, trying first over-the-counter (OTC) medications such as acetaminophen or ibuprofen.

As they say, an ounce of prevention is worth a pound of cure.  The key is to avoid irritating or traumatizing the ear.   Any slight disruption of the skin of the ear canal can lead to otitis externa.  Keep the ear dry during swimming or showering with silicone or plastic ear plugs or even a swim cap or waterproof head band that covers the ears.   Avoid cleaning the ears with instruments such as cotton swabs (Q-tips), paper clips, bobby pins or the like.  Doing such things can easily traumatize the ear causing big-time problems (see Ear Cleaning: Do’s and Don’ts).  You can also prevent otitis externa by filling the ear canal isopropyl alcohol (i.e., “rubbing alcohol,” available at most stores; don’t use the good stuff such as your expensive bottle of Tequila—save that for your summertime margaritas) after swimming or bathing serves two purposes:  (1) Alcohol has a lower evaporation temperature with water, dissolves easily in water and thus serves to remove residual water, and (2) it kills bacteria.  I have mothers and fathers of young children who carry a small dropper bottle of alcohol in their handbags or gym bags whenever they take the kids out swimming.  If you can’t find a dropper, use a cotton ball as a makeshift dropper by soaking it with alcohol and then squeezing it to release the alcohol in the ear.  Massage the alcohol in the ear by gently pumping on the tragus (the flap of tissue that partially covers the entrance to the canal and is attached in front of it).  Then tilt the head to allow the alcohol to drain out of the ear.  Simple as that, nothing fancy. 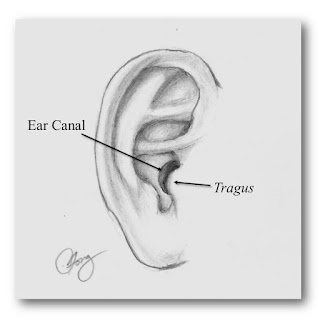 So enjoy your summer, stay safe, and hope not to see you in the clinic or E.R. with terrible ear pain.