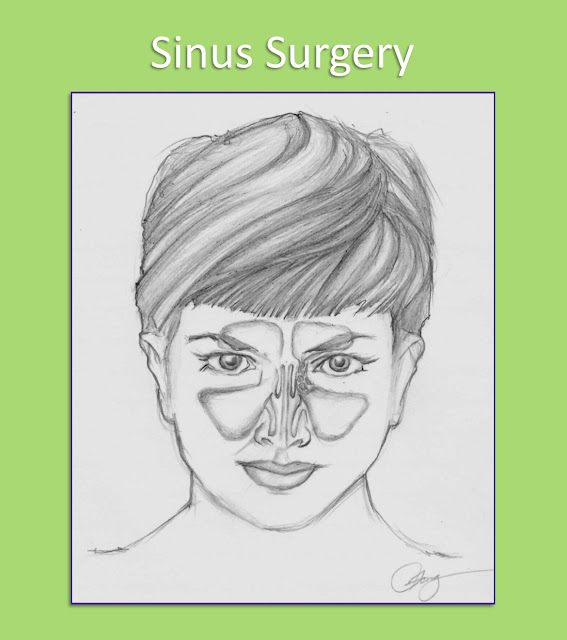 So you think you need sinus surgery?  You’ve tried everything under the sun to remedy your sinus problems, from a variety of over-the-counter (OTC) medications to prescription medications including antibiotics, and still that Rolling Stones’ song blares in your head: “I can’t get no…satisfaction!”  What now?  You’ve heard of people having sinus surgery, and you’ve also heard from some folks who’ve had it would rather have their teeth drilled without lidocaine or their eye seared with a red-hot poker. Blast it!  What’s a poor sinus sufferer to do?

Don’t despair, for nowadays surgery isn’t as bad as was in the past.  More on surgery in a moment, but first we should discuss the indications for sinus surgery, or the “why?” behind this.

Indications (the reasons for surgery)

Following are some of the reasons for sinus surgery.  Surgery is typically a therapy of last resort, since it is invasive and, if you can imagine, many people have an aversion to being cut upon by a surgeon no matter how funny or gregarious they are.

Chronic sinusitis:  due to a persistent inflammation or infection of the sinuses.  Symptoms include facial pain, headaches, nasal drainage (often discolored such as yellow or green) from the nose or down the back of the throat (postnasal drainage), nasal stuffiness or obstruction to breathing.   Chronic cough also occurs especially when lying down.  Some of this was explained in the prior post on Paranasal Sinuses: What, Where and Why?

Oftentimes a result of chronic sinusitis is nasal polyps, grayish soft tissue arising from the sinuses as a result of chronic inflammation, causing the mucosa to become edematous and swollen, such that a polyp is formed from this mucosa.  Polyps often are found in the sinuses during surgery, but if they become enlarged enough, the start to protrude out of the sinuses and into the nasal passages.  See the post on Nasal Polyps.

Asthma and chronic cough.  Oftentimes asthma and chronic sinusitis (and sinus/nasal polyps) go hand in hand.  There is a phenomenon called the nasal-pulmonary reflex, where chronic inflammation in the nose triggers a neural reflex in the bronchial tubes of the lungs, leading to bronchospasm (causing narrowing of the bronchial tubes) and resulting in wheezing and/or persistent coughing and shortness of breath.

Problems with sense of smell and subsequently taste.  This is due to lack of proper airflow to the top of the nose where the olfactory nerves lie, the nerves responsible for detecting smells.  Consequently, a proper sense of smell is needed in order to properly taste things such as food and drink.  The tongue provides only rudimentary taste (sweet, sour, salt, bitter and a character known as ?edamane?).  The nose and sense of smell provide the actual nuances and quality of the foods you eat.

Unusual findings on a nasal exam or xray showing findings worrisome for a tumor.

As mentioned before, surgery is often recommended only after a patient fails medical therapy.  Medical treatment includes nasal steroid sprays (ie, fluticasone, triamcinolone, etc., which are available over-the-counter), oral steroids which help to reduce tissue edema and swelling, antibiotics to kill any bacteria causing and infection, which in turn causes the chronic sinus inflammation or trapping secretions or pus in the sinuses; antihistamines (i.e., cetirizine, fexophenadine?, loratadine) which block the effect of allergies that can cause chronic sinus inflammation; decongestants (i.e., pseudoephedrine) which serve to decrease tissue edema/swelling; montelukast, which acts on allergens but via a biologic pathway than antihistamines.   Also rinses or spraying the nose with a mild salt solution (called saline) may also aid in clearing secretions and rinsing out any allergens, dust or irritants.

If medical treatment does not provide lasting results, sinus surgery is then indicated. 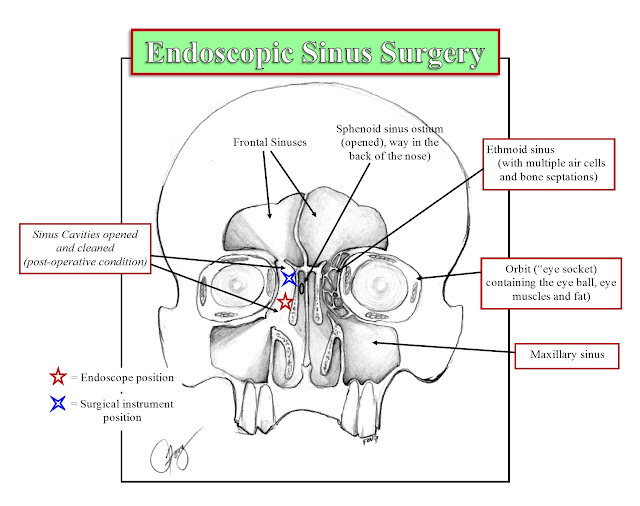 Sinus surgery most often done with small endoscopes, and thus the term endoscopic sinus surgery is typically used to describe this.  The approach is through the nasal openings and through the nasal passages (nasal cavities).  Surprisingly, one can place a bunch of stuff like surgical instruments into the nose and the length of the nasal cavity is a lot farther than most people appreciate (but don’t do anything stupid to test this by placing extremely long foreign objects.  Just look at some of the pictures like the ones in this and other posts).

The nose is first anesthetized and decongested, often with a dilute cocaine solution.  Yes, this is the same stuff they sell on the street, the same stuff smuggled into the country from South America, and the same stuff that got Al Pacino in a load of trouble in the movie Scarface.  Only the recreational cocaine is in a highly concentrated powdered form, whereas the medical form is a dilute 4% solution.  We soak this on cottonoids, typically using only 4 milliliters (which is equivalent to 160mg or 160/1000 of a gram of powdered cocaine) and thus won’t make you high.  Sorry to disappoint you.  The purpose is to numb the inside of the nose but also to decongest or shrink the mucosal tissues that line the nasal passages to improve visualization and reduce the difficulty of the surgery.  I operated on one doctor who, upon waking up in the recovery room, announced loud and clear to the nurses, “I had cocaine!  I know as doctors we aren’t suppose to do drugs, but I got cocaine!  At least that’s what Fong said he’d give me!  That’s totally awesome!  Ain’t it?” He was happy as a clam, mainly from the stuff given to him by the anesthesiologist rather than the cocaine.  Anyway, our goal is to make people happy, and he was one happy camper.

Also, lidocaine with epinephrine is often injected into the mucosa where surgery is planned.  This further numbs but also vasoconstricts the tissue to reduce bleeding during the surgery.

After the patient is prepped and draped, a rigid fiberoptic endoscope is inserted, which is attached to a camera and the image is displayed on a monitor. This provides a highly magnified view of the surgical site.  Incisions into the mucosa are made with a variety of instruments including small knives, biting forcepts or instruments called shavers or microdebriders.  There’s actually a lot of various instruments available at the surgeon’s disposal, and I won’t get into the fine details of this, only to say they are designed to do surgery in the least traumatic fashion, enhancing the effectiveness and safety of the surgical procedure.

The surgeon first identifies the middle turbinate, which is a major landmark for sinus surgery, as most of the surgery takes place lateral or towards the outer side of this structure.  The ethmoid sinus often is opened as most people have sinus disease (abnormal tissue) in the ethmoids, which in turn can affect the maxillary and frontal sinuses since they drain in or near the ethmoids.  Mucosa, soft tissue such as polyps, secretions and bone septations are removed.  Surgery is done with small instruments, and care is taken not to get too gonzo and plow into structures you really want to avoid, like the eye and the brain.  As such, patients need to be aware of these potential surgical risks, though quite rare. 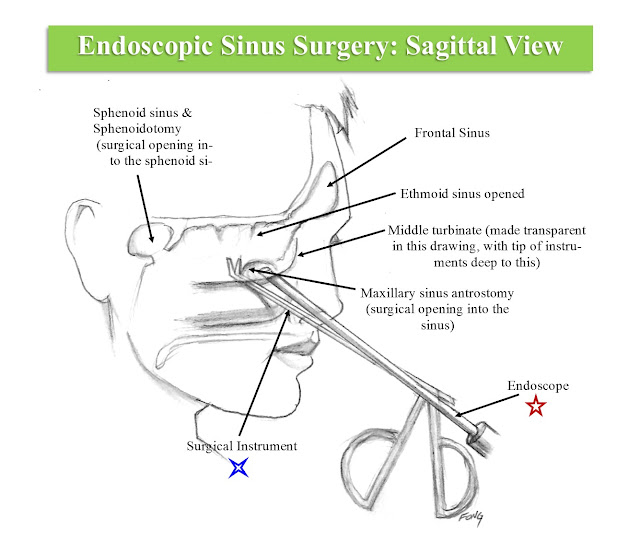 Often the maxillary sinus needs to be opened, and this is called a maxillary antrostomy, meaning the natural opening into the maxillary sinus antrum (antrum is the actual sinus space itself) is opened wider to allow proper ventilation and drainage.  The suffix -ostomy in medical parlance means an artificial or surgical opening.  Likewise, if the sphenoid sinus needs to be opened, a sphenoidotomy is done, where -otomy is the procedure creating the opening, to produce a sphenoidostomy.  Yeah, understandably medical terminology can be confusing which is why it takes so darn many years to become a doctor. 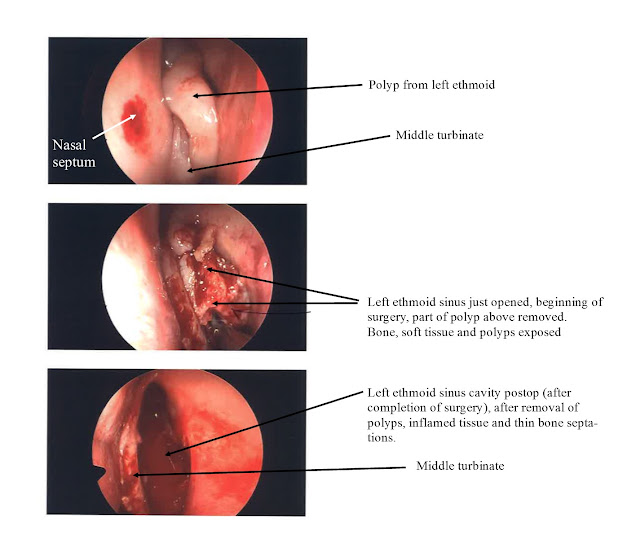 Afterwards the sinus cavities are often packed.  In the “old days” this was with about 3 feet of ribbon gauze layered on one side of the nose (and both if surgery was done on both sides, a.k.a bilateral in doctor jargon).  Later, large expandable sponge packs were used.   Both are still used at times, but create a lot of discomfort and pressure, and removing packs can be quite and uncomfortable ordeal.  Fortunately, there are several absorbable packs which later dissolve and then suctioned out, which is way, way more comfortable and patients often need less pain medication than in the past.  Also an absorbable stent can be placed, which is an expandable device that resembles a Chinese Finger Torture gadget.  This prevents unwanted scar bands and preventing natural sinus drainage.  An absorbable pack can be placed within the stent if there is persistent bleeding.

Afterwards it’s important to keep the nose and sinuses clean with nasal saline solution which is sprayed into the nose, and later your doctor often will have you irrigate the nose and sinuses.  Though strange as this sounds, patients often become quite accustomed to nasal-sinus irrigations.

Well that’s all on this topic folks.  Until next time...