Epiglottis: Another Reason for Vaccinating Your Child 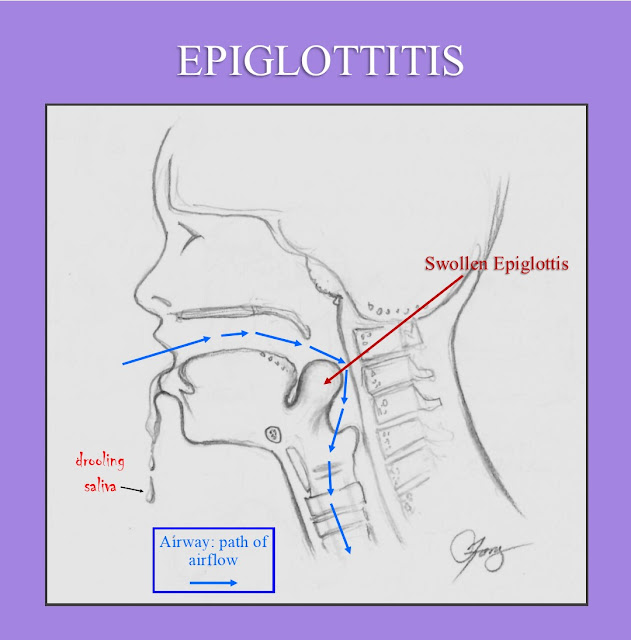 Of all the intensely scary conditions afflicting children, epiglottis is one of them.  The epiglottis is a flap-like structure situated above the vocal cords; it is the uppermost part of the larynx that helps temporarily close off the airway during swallowing.  The epiglottis however is just one part of the tissue above the vocal cords known collectively as the supraglottis.  Thus, infection of this area is also known supraglottitis, and this condition restricts the passage of air down through the larynx to the trachea and eventually to the lungs.  If the supraglottic tissue completely blocks the airway in its swollen state, airway obstruction can follow, leading to asphyxiation and death.  As such, epiglottitis is considered a medical emergency.

Historically, this is a childhood disease; children between 2 to 4 years of age are most often affected, but this also can occur in adults.  I say “historically” due to the advent of a vaccine years ago which I’ll explain shortly.  The infection is caused by the bacteria Haemophylis influenzae Type B which also causes meningitis, pneumonia and otitis media in young children.  The child with epiglottitis presents with fevers, a muffled voice, difficulty swallowing (dysphagia), pain with swallowing (odynophagia) such that the child drools since swallowing saliva is very painful.  Sometimes noisy breathing on inspiration (inspiratory stridor) is noted.  The condition can progress rapidly.  The child may the exhibit a tripod position—sitting upright and leaning forward with the chin extended forward and mouth open and drooling—in an attempt to position the airway in a more straight-line fashion, reducing resistance to breathing.

The diagnosis is made mostly by history and often x-rays.  Due the relatively small airway in a child epiglottis is more acute and can deteriorate much faster to airway obstruction and ultimately death compared to adults.   If epiglottis is suspected, the child must be sent to the emergency room (E.R.), where the patient is kept as calm as possible, and examination of the mouth or throat is kept to a minimum.  The reasons for these measures is that any excitement such as crying and agitation can tip the child into obstruction, due to trapped secretions or the swollen tissues falling into the airway or both.  As such, examination is kept to a minimum: attempting to examine the throat is often avoided since it usually is unremarkable (the epiglottis lies below the level of the base of tongue and often not visible when looking into the mouth and throat).  Often an x-ray is done which can show an enlarged epiglottis or swollen supraglottic tissues.

The child is then taken immediately to the operating room with an anesthesiologist and otolaryngologist in order to secure the airway.  This requires placing a breathing tube past the swollen supraglottic tissues, between the vocal cords and into the trachea (this is called endotracheal intubation).  This is a far more difficult procedure compared to intubating a normal larynx (Figure 1).   The otolaryngologist is prepared for a rigid bronchoscopy (if such instruments are available) to better visualize the airway, and also for a possible emergent tracheotomy, where an incision is made into the neck, and a breathing tube is placed into the trachea below the larynx (see Tracheotomy for more details on this surgery).  Once the airway is secured by one of these means, the child is kept on a ventilator (breathing machine attached to the tube in the airway in the ICU, treated with i.v. antibiotics until the swelling has subsided, which can take a few days.  As you can imagine, this is a very precarious and stressful situation for all involved.

After the Haemophylis influenzae type B (Hib) vaccine was introduced in the 1980s, the number of pediatric epiglottitis cases substantially declined.  In fact, I haven’t seen a case of childhood epiglottis in over 20 years in private practice.  I’ve seen epiglottis in adults, where the vaccine was not available when they were children, but this condition in adults is not as quickly progressive and many times emergent intubation or tracheotomy is not required.  A more thorough exam can be done, including a fiberoptic exam of the larynx at the bedside, without tipping the patient into a crises of airway obstruction.  Often such cases can be treated with i.v. antibiotics and close airway monitoring.

This is another example where a vaccine can prevent a rapidly progressive and potentially fatal childhood disease.  I fear however that we may see cases of epiglottitis in young children again due to an increase in nonvaccinated children.   Despite the fears surrounding vaccines, one must keep in mind the benefits far outweigh any potential risks.  And when it comes to saving the life of a child or preventing a life-long disabling condition, the argument falls far in favor of vaccination.  (also see the article on another preventable, vaccinatable disease and its terrible consequences--Tetanus).