The Stupidity of Prior Authorizations in Healthcare 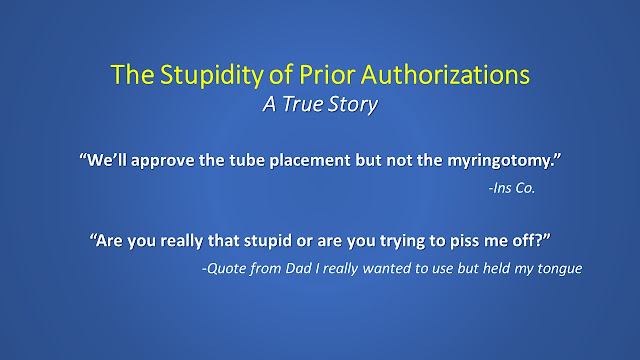 My dad had a saying whenever we did something not to his liking.  His quote has cemented itself in my head after all these years, and though I’ve never used it with my kids, there are times it flashes in my brain whenever I or someone else does something, really, really…for lack of a better word…stupid.  So what did he say that left such an indelible mark on a young mind?:


“Are you really that stupid or are you trying to piss me off?”

Yep, that was Dad.  When I was a kid, I understood this to be a rhetorical question, though rhetorical was not yet in my vocabulary.  This was more of a statement rather than an inquiry.  I understood it required no response since its meaning was crystal clear, until one day he looked straight at me for an answer.

What?  Are you kidding me?  He actually wanted an answer!  I stumbled with a bunch of “uhs” and still he stood there, hands on hips, waiting for an answer.  I was sweating it bad, going over all the foreseeable consequences of a response.  If I said I was stupid it would seem I was mocking him—bad, very bad.   And if I said I was pissing him off, well that would be very, very bad.  Nobody wanted to piss-off ex-paratrooper-in-the-82nd-Airborne-Dad, especially a 10-year-old kid.  That would be insane.  That was the definition of stupid.  And yet there I was in a Catch-22, another word not yet in my vocabulary.

I hurriedly came up with the best answer I could:  “Uh, uh, I think I’m stupid.  Uh, I think I got that from Mom?”

Notice the last sentence was phrased as a question since I wanted to convey an obvious sense of uncertainty with my response, hoping this would mitigate the resulting carnage.  Surprisingly, Dad simply said, “O.K.”

Shocked, I walked then skipped away with a sense of semi-joy.  Sure, I insulted Mom, but if it ever got back to her that I used her as a scapegoat, she’d know it was an untruth.  Mom was always much smarter than my late dad, God rest his soul.

Fast forward years later.  I’m an ENT doctor and one of the many time-consuming annoyances is prior authorizations, commonly referred to as “prior auths.”  Prior auths are a bane to the practice of medicine.  A prior auth requires a medical provider with years and years of education to ask the patient’s insurance company to “approve” a certain diagnostic test (such as a CT or MRI) or a surgical procedure.  Mostly, it’s one of the physician’s staff that must do this, but from time to time the doctor must get on the phone to justify why a test or procedure is necessary.  Sometimes the test or procedure is denied, and usually by someone with no medical training whatsoever.  Many believe prior auths are a  tactic insurance companies use to not only delay treatment, but to frustrate the provider with the process such that he/she will simply give up and not do the test or procedure.  But most docs will suffer through a prior auth for the sake of their patient.  Prior auths are a cost-saving measure that doesn’t save costs but shifts it to the doctor’s practice.  The time burden on the doctor’s staff is enormous: in my practice, one staff member wastes the equivalent of over one full day a week just on prior auths, when she could be spending it more productively on meaningful endeavors that actually improve quality of care.  And I’m the only doctor in my practice!  Much larger group practices and hospitals employ several fulltime people whose sole job is dealing with prior auths.  Multiply this by the gazillon medical practices and hospitals throughout the country and you can imagine the expense devoted nationwide just on prior auths.  Prior-auths do not improve the quality of care but lower it, by needlessly wasting time that adds unnecessary expense.  This is one reason healthcare is so expensive in the U.S.

I recall years ago needing a prior auth for one of the most common procedures done by ENT doctors: myringotomy and tube placement.  You can refer to Ear Tubes and Otitis Media for a more detailed discussion on this topic, but the gist is a myringotomy is the incision into the ear drum through which the tube in is inserted.  You must do the myringotomy first in order to place the tube.  Plain and simple.  Or so I thought.

One day after waiting for approval  of a prior auth by a certain insurance company, my office gets a call from that company saying, “We’ll approve the tube placement but not the myringotomy.”

I was beckoned to the phone.  The average ENT doctor performs thousands of myringotomy and tubes during the course of a career.  It’s one of the most common surgical procedures in children.  Yet there on the phone was someone telling me how to do my job.  I tried to explain that I must do the myringotomy, that without it I could not place a tube through the eardrum.  I could not simply lie the tube on the drum since that would be useless, nor could I push the tube through with brute force, since that would damage the entire drum.  I explained the CPT book (a book that assigns a numeric code for every surgical procedure known to mankind, and is the universal sourcebook used by every medical practice and hospital in the country) lists myringotomy alone or myringotomy with tube placement, but there was no code for tube placement alone, and so “tube placement” as a sole procedure does not exist.  I also explained the pathophysiology (in layman’s terms) of otitis media and the rational for the surgical procedure.

I spent an inordinate amount of time, time that was taking me away from patients waiting in the exam rooms, time I could never get back.  During this long spiel, in the back of my mind I really had the urge to say:

“Are you really that stupid or are you trying to piss me off?”

No doubt, that would’ve made matters worse so I held my tongue.  I use this example and Dad’s quote on a Power Point slide and sometimes flash this during a lecture to residents who likewise suffer the indignity of the prior auth process.  They understand the sentiment and meaning completely; they know full well this question speaks for itself.  No answer required.