The Thyroid Gland: Where is it and What is it? 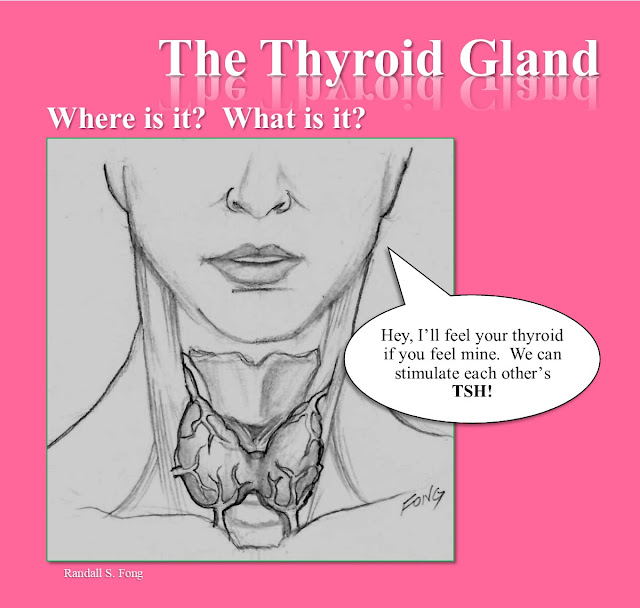 Patients often present to ENT (Ear, Nose and Throat) doctors with thyroid problems.  We ENT docs become involved mainly for surgery of the thyroid gland, which essentially involves removing a part or the whole gland.  We’ll cover thyroid surgery (with drawings and some juicy surgery photos) in a future post.  Discussion of all things thyroid can be lengthy, so to enhance your understanding and prevent undue boredom, I’ll break this topic into several sections.  We should first talk about fundamentals.  So this post covers form and function, better known as anatomy and physiology in medical parlance.

Where is the thyroid gland?

The thyroid gland is found in the lower, front part of the neck.  It’s a dumb-bell or butterfly-shaped gland comprised of right and left lobes connected by a band of thyroid tissue called the thyroid isthmus (think of Panama when you hear isthmus, a thin strip of land connecting North and South America). The isthmus overlies the trachea—the “windpipe”—and each lobe lies on either side of the trachea.   Skin, fat, a thin platysma muscle and then strap muscles cover the gland.  The strap muscles raise and lower the larynx (“voice box”) when speaking or swallowing.  The platysma muscle allows you to tense the front of your neck, which for most folks serves a noncritical function.  The recurrent laryngeal nerves run deep to each thyroid lobe.  These nerves insert into each side of the larynx and stimulate movement of the vocal cords, necessary for voice production.  There are also four parathyroid glands lying on the back of each thyroid lobe, two on each side.  The parathyroid glands regulate your body’s calcium. 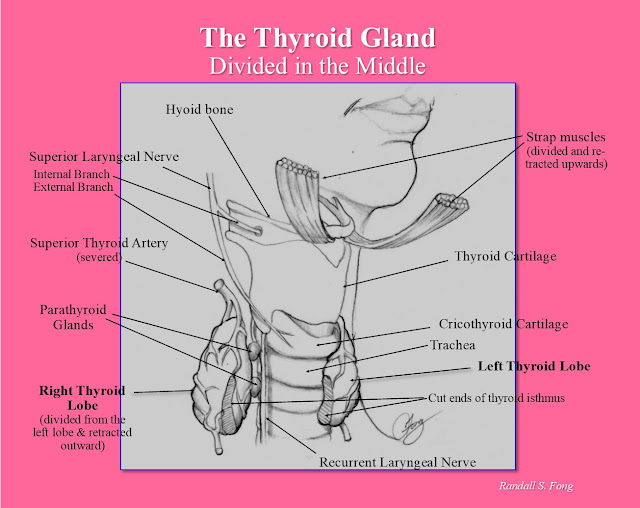 The thyroid gland itself is a soft structure that’s fed by several small arteries and drained by several veins.  The carotid artery (the major vessel that sends blood to the brain) and jugular vein (the major vein the drains the head and brain) are in close proximity to the gland.  Given its rich blood supply, the gland is very vascular.  It is also surrounded by fat tissue containing small lymph nodes (you can check out the description of lymph nodes and the lymphatic system in Neck Mass Evaluation and Workup).

Side-Bar:  What the heck is a goiter?  You’ve probably heard this term, which is a rather generalized term with no reference to its cause.  Goiter means an enlarged thyroid gland, in the old days commonly caused by iodine deficiency.  Some folks mistaken the term goiter with “tumor,” but in many cases it is not.  Thyroid enlargement can result from a variety of causes, such as a large nodule or several nodules, a benign mass or a cyst (fluid filled space) within the gland.  However, “nodules” can be benign (noncancerous, non-worrisome) or malignant (cancerous), the majority being benign. The gland itself can be large without the presence of a nodule or mass.  We’ll cover more about thyroid abnormalities in future posts.

What does the thyroid do?

A “gland” is an organ that secretes something and the thyroid gland secretes thyroid hormones.  There are two forms of thyroid hormone, abbreviated T4 and T3.  We’ll not get into detail here only to say that both serve similar functions (to satisfy the more curious out there, the T4 molecule contains four iodine atoms and T3 has three).  Their function is difficult to explain succinctly in layman’s terms, but I’ll give it a shot.  These hormones help regulate other body systems to perform properly.  If you’re lacking thyroid hormone you can feel lethargic and depressed, gain weight, lose hair, feel cold, amongst other things.  This is called hypothyroidism, where hypo- is a fancy prefix in medicine meaning “low” (leave it to doctors to create a longer word to describe one with fewer letters).  On the flip side, hyperthyroidism is an overactive thyroid, one that creates too much thyroid hormone.  In this condition, you’d might lose weight, experience tachycardia (elevated heart rate), feel hot and jittery and anxious; much like an overdose of caffeine (if there’s such a thing as too much caffeine in this day and age).

How does it function?

Now let’s make things even more confusing and talk about another hormone called thyroid stimulating hormone (TSH for short).  TSH is secreted by the pituitary gland, a gland attached to the brain.  TSH circulates in the blood stream, and as its name implies, it stimulates the thyroid gland to produce more thyroid hormone.  This process causes the gland to absorb iodine circulating in the blood and causes thyroid follicles (the fundamental “gland” unit in the thyroid) to start producing more thyroid hormone (T3 and T4).  The thyroid gland needs a supply of iodine from your diet to create T3 and T4.  People who say they have an iodine are not truly allergic to the iodine molecule itself, but to a variety of other compounds of which iodine is one part.

As more T3 and T4 circulate in the bloodstream, the pituitary gland senses this increase and through a process called a negative feedback loop, the pituitary then slows down its secretion of TSH.  The decrease in circulating TSH then signals the thyroid gland to slow down its production of T3 and T4.  Hence, there’s an inverse relationship between TSH and the T3 and T4 levels; when TSH is high, the body is hypothyroid or low in T3 and T4.  When TSH is low, there is a state of hyperthyroidism, where there’s too much T3 and T4.  If TSH is in the normal ranges, then you are euthyroid—meaning your thyroid T3 and T4 are at normal levels.  TSH happens to be a very sensitive test to diagnose whether one is hypo-, hyper- or euthyroid, more so than measuring the actual T3 and T4 levels, which often can be normal in lesser degrees of hypo- or hyperthyroidism.  This is the reason your doctor orders blood work to check your TSH level as part of the workup to assess the function of your thyroid gland.

Many patients mistakenly assume that if their thyroid labs are normal (ie, TSH, T3 and T4) then there is nothing in their thyroid gland.  However, oftentimes nodules or tumors can arise in the gland resulting in absolutely no change in thyroid function.

Are there other methods to further assess the thyroid?

Yes.  The key is to dive deeper, so to speak, to determine the cause of an enlarged thyroid.  One of the most useful tools is a thyroid ultrasound.

Ultrasound uses sound waves with frequencies that are higher than the human ear can detect.  Thus, the fancy prefix ultra-, meaning “beyond” or “excess.”  Ultrasound is a relatively safe mode of imaging since it uses no radiation.  The ultrasound device transmits these sound waves into the tissues and measures the response as they are reflected back.  A fancy computer runs calculations (that are far beyond my expertise to explain) to create meaningful images.

Below is an example of a normal thyroid ultrasound image. 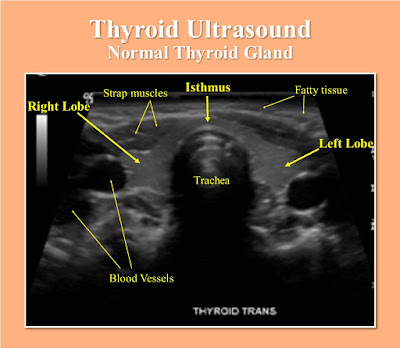 This image is an axial cross-section—imagine slicing the neck horizontally and then looking up into it.

We’ll get into abnormal U/S findings when we talk about not-so-normal thyroid findings in future posts, but I’d like to delve into one further item here.  In the case of nodules, patients often ask, “Hey doc, why not remove the nodule only?  Leave the rest my gland alone!”  As mentioned before, the thyroid is very vascular, much like the spleen.  Nodules are typically deep within the gland.  Due to its soft and vascular nature, it’s nearly impossible to localize and remove a nodule or mass within the thyroid gland.  Opening the gland by cutting through its capsule and digging within its substance is a bloody mess.  The bleeding also could not be well-controlled, necessitating removal of the gland anyway.  So to remove the nodule, one needs to remove entire thyroid lobe containing it.

Anyway, congratulations!  You just learned something about thyroid anatomy and physiology.  Tell that to your family and friends at the next social event, or use the pick-up line in the opening illustration to really impress that special someone; it’s all in the delivery.  However, you may need a drink or two beforehand as an excuse should you fail.