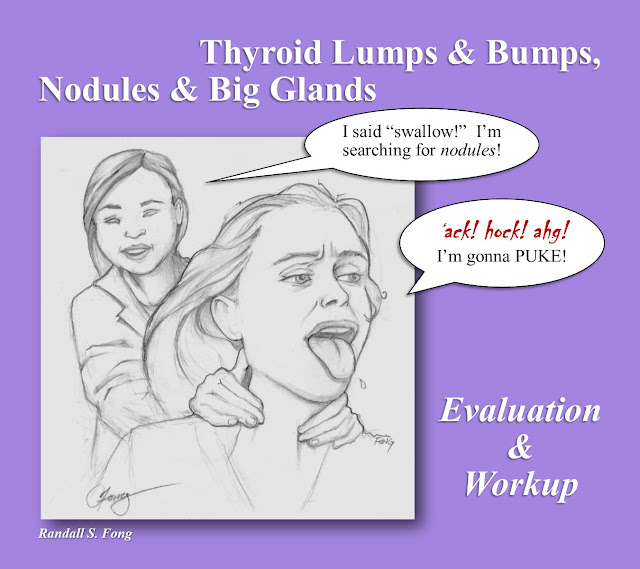 One day while admiring yourself in the mirror, you happen to notice an odd lump in the lower part of your neck.  “Gee, that wasn’t there before,” you ponder to yourself, “or maybe it was.”  Your spouse or significant-other happens to be walking by and stops to look as well, since obviously you must’ve been thinking aloud or maybe it was the funny expression in the mirror.  Anyway, she notices it too.

“You oughta get that checked.  Could be a tumor.  Oh, look at the time!  Gotta go--meeting the girls for coffee!” She hustles out, as your jaw hits the floor.

The thyroid gland is located on the lower part of the neck.  It’s an organ you’ll hardly notice unless it causes problems, like an unexpected nodule, which is a nonspecific term for any lump or bump in the gland.  Sometimes the gland has a bunch of nodules causing it to enlarge.  Sometimes it becomes large with no nodules.  Sometimes patients present not so much with a visible finding, but with other symptoms such as a sense of choking, difficulty swallowing, voice changes.  Other times there are nonspecific symptoms such as weight gain or loss, tiredness or anxiety, a sense of feeling cold or hot when others are comfortably warm (symptoms of hypothyroidism or hyperthyroidism) which leads to examination of your thyroid gland.

We’ve covered thyroid anatomy and function already.  If you need a refresher or you’re hankering for something fun ‘cause you’ve got nothing better to do on a Saturday night, then check out The Thyroid Gland: Where is it and What is it?

Anyway, you’re at the doctor’s office since this lump is driving you nuts.  Your doctor asks a bunch of questions as doctors always do, makes a few jokes if you’re really lucky, and then proceeds to feel your neck.  Don’t be alarmed if the doc stands behind you and places their hands around your neck, just as if you’re going to be choked to death.  Relax: a doctor’s a doctor and won’t harm you, unless you were misbehaving or stiffed the overworked doc on your last bill.

Let’s assume you’re still alive or at least conscious, you weren’t choked to death and the exam continues.  Now for some real fun.  I and most ENTs want to assess the function of your vocal cords, those two bands of tissue in your larynx that allows you to converse with friends or complain about your ginormous deductible or the absurdity of your $8.99 co-pay.

To view the vocal cords and confirm they’re moving normally, the doc will grab your tongue, jam a dental mirror down your throat and make you gag, all the while forcing you to say something stupid such as “aaaaa” or “eeeee” which feels impossible to do since your tongue, covered in gauze, is pulled towards your feet.  Honestly, it’s not that bad and despite the weirdness of it all, most people tolerate this well, though a few “chunks” were blown my way by a few highly gag-prone people.  Since the larynx is viewed indirectly with a mirror, this exam is also called an indirect laryngoscopy. 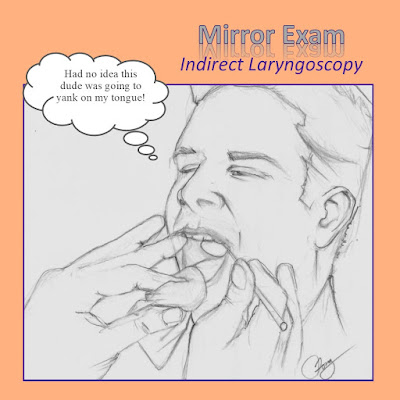 If an adequate view is not possible with the indirect mirror exam, we’ll do a nifty procedure with a flexible, fiberoptic scope, called a  nasopharyngoscopy.  This looks and sounds more hideous than the reality of the experience and takes just about a minute.

“Why must you put me through this?” you may ask.  Answer:  The nerves that move the vocal cords lie against the backside of the thyroid gland.  Weakness of a cord could be harbinger of malignancy (ie, a cancer) invading into the nerve.

Sometimes structures around the thyroid can give the impression be mistaken for a nodule or enlargement.  For instance, variations of normal anatomy such as a generous amount of subcutaneous (below the skin) fat, a prominent laryngeal cartilage, prominence or tightness of muscles overlying the gland are examples.   Other not-so-normal findings are enlarged lymph node(s), lipoma (benign fatty tumor), sebaceous cyst (benign cyst found under the skin), thyroglossal duct cyst, or a variety of other masses.

We mentioned the concept of ultrasound in the last post and provided a nice picture of a normal study.  Below is one that is not normal. 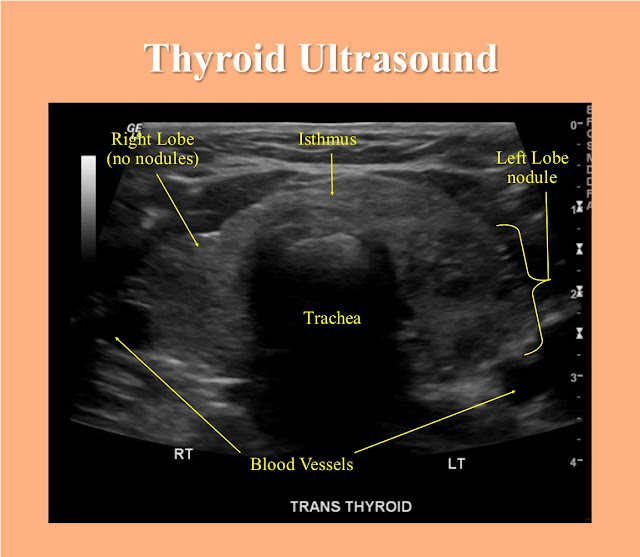 Lab or blood work also is used to help determine a cause of nodules.  As mentioned in the prior post, the thyroid creates thyroid hormones.  Sometimes nodules (often benign) develop from a hyperfunctioning (over-active) gland or a hypo-functioning one (under-active).

Ultrasound is great to assess for nodules but also has another important use:  to biopsy a nodule.  One can do a needle biopsy, which is a sampling of tissue obtained a hollow needle.  Ultrasound helps immensely in locating the nodule in question and guides the doc doing the biopsy (often an interventional radiologist) for the proper placement the needle.  I try to explain to patients that a thyroid biopsy in the office without ultrasound is often a “blind pass”—it is difficult to know how deep the needle must be placed or if something other than the nodule is biopsies.  You must pass the needle through skin, subcutaneous fat, muscle, the thyroid gland itself, before getting to the nodule.  If normal thyroid gland is sampled away from the nodule, then you can have a false negative result.  Also, there are some good-sized blood vessels around the thyroid, and you can imagine the bloody mess should you "biopsy" one of these instead.

The specimen from a needle biopsy is small.  The pathologist (a doctor who examines tissue to determine the nature and cause of disease) then studies the specimen under a microscope, looking at individual cells to determine a diagnosis.  This is difficult to do, which is the reason pathology is a four-year residency after medical school.

Thyroid cytology (the study of cells, cellular biology) gets pretty tricky, compared to the cytology of other organs.  Usually biopsy will render not only the diagnosis, but whether it is benign or malignant, the latter being a potential life-threatening disease.  However, there is one form of thyroid neoplasm (neoplasm means unusual growth) that can be benign or malignant.  This is called a follicular neoplasm.  A variant of this is a Hurthle cell neoplasm.  It is typically not possible to distinguish the benign versus the malignant form on cytology, since the cells look the same for both.  The only criteria that makes the tumor malignant are 1. Invasion outside the capsule of the nodule or 2.  Invasion into a blood vessel.  The only way to determine this is to remove the part of the thyroid gland containing the nodule(s) in question, and this requires surgery.  Then the pathologist can study the entire gland and see its architecture under the microscope, i.e., how the tumor cells relate with other cells in the thyroid gland.

Often times people undergo surgery and the final result is a benign follicular adenoma (adenoma is a benign tumor of a gland) or just a benign goiterous nodule.  Benign means non-life-threatening and often do not need treatment or surgery.  Thus, a whole lot of people have undergone surgery unnecessarily.

However, in the past several years there have been genetic studies that can be done on thyroid biopsies that show a follicular neoplasm.  One of these tests is called Affirma, which looks for specific genes that can increase the risk for malignancy.  This can add another week or more to the pathology process (cytology usually takes up to a week).  This additional study can then guide whether to do a thyroid surgery or not.

Nodules are a frequent finding in thyroid glands, more so in females.  The good news is that after the workup above, the majority of thyroid nodules are benign and need no further treatment.

We’ll talk more about indications for thyroid surgery in a future post, so hang tight!