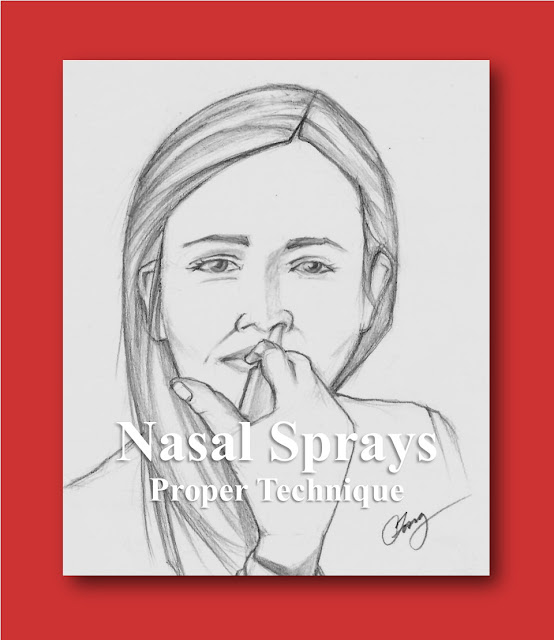 Ever notice the different nasal sprays out there?  You’re probably using one or two of these.  What once were obtained only by prescription are now available over-the-counter (OTC).   There are also several prescriptions nasal sprays.  Often when patients present for nasal problems, I ask if they’ve been treated with any nasal sprays.  Some have been but many times they don’t recall the name or type of spray, simply stating, “ah you know, the stuff you get from the store.”

Now there’s a lot of “stuff” out there to spray into your nose, legal and illegal.  So as docs, we always like specifics.  It kinda-sorta helps.

First of all, let’s talk about proper application of a nasal spray.

In order to avoid a long and wordy post and yawn-provoking, not-so-fun boredom, we’ll break this topic into several bite-sized posts.  We’ll eventually cover the mechanisms of action and indications for the variety of nasal sprays in the future, but first let’s go over proper use.  Notice the title picture above.  You see how she’s using the nasal spray?  She’s using her RIGHT hand to spray the LEFT side of her nose, pointing it slightly laterally to the left side of her head.  I usually instruct patients to aim it to the outer corner of the opposite eye (the lateral canthus).  Vice versa for the right side: use the left hand to spray the right side.

What gives?  “The doc is just trying to justify all his years of fancy education,” you’re probably saying (out loud) to yourself.  A spray is just a spray as long as it gets up the nose.

There’s a rhyme and reason for this counter-intuitive methodology, and it doesn’t require a fancy education to understand this.  To explain the rationale, let’s cover a little bit of nasal anatomy.

Figure 1 is a drawing of the nose and sinuses and where they’re located in your head.  Note: your skull is not pure dense bone, no matter what folks may have said about your thick head, but has several air spaces known as the paranasal sinuses.

Let’s take a close-up view of the nose.  Figure 2 is a cross-section of the nasal passages inside your nose.   Most of the nasal volume is actually front and back (anterior to posterior, in medical lingo) rather than straight up, as many people believe.
Notice the lateral structures on each side (towards the far sides of the nasal passages).  You’ll see the turbinates.  These structures, particularly the inferior turbinates, have a pink mucosa covering a richly vascular submucosa.  This tissue provides the sponginess to the tissues, allowing for humidification and warming the air in the nose prior to its being received down the trachea and into the lungs.  Thus the mucosal secretes mucous and fluid to provide moisture to the inhaled air.  This also can be a source of problems.  Also notice the middle meatus.  This area underneath the middle turbinate is the source of the ventilation and drainage of all of the sinuses except the sphenoid sinus.

Thus, directing the spray to these lateral structures is most optimal method of application: the spray is delivered to the most affected mucosa and also to the middle meatus where most of the sinuses drain.

Notice the septum in the middle.  This is the partition or wall the separates the left and right sides of the nasal passages.  It has a thin lining of mucosa but is mostly bone and cartilage.   It does not have the thick soft submucosa as the turbinates and thus contributes little to congestion and secretion, so delivery of a nasal spray to the septum is less critical.  Given its thin mucosa, applying too much of a spray to the septum can even be detrimental, causing bleeding and erosion of the mucosa, sometimes leading to a septal perforation (hole in the septum) which is undesirable.  I’ve seen patients create some doozies of septal perforations from improper nasals spray use.  Also, many times the septum is not perfectly straight.  This is called a septal deviation, which can make the septum more prone to irritation from an improperly used spray.  So it’s even more important to direct the nasal spray away from this structure.
Figure 3 is a side-view (sagittal view in medical parlance) of the nasal passage.   This shows how the nasal spray should disperse into the nose.  Each little circle in the drawing represents a droplet of the nasal spray you’re using.  There are thousands of these little droplets entering your nose with one application of the spray, so the illustration is an exaggeration of the droplet size.  And I wasn't about to draw thousands of tiny little droplets, since that would be ridiculously time consuming.

Remember: right hand sprays the left nostril, left hand sprays the right.  Aim towards the lateral canthus.  I’ve seen patients who’ve used nasal sprays for a long time (even years) and when they’ve applied these instructions (i.e., they listened to my advice), some of them are amazed the same nasal spray they’ve been using forever-and-ever provides an even better result!  So listen to your doc--for heavens-to-Betsy you’ll find he/she is not so full of hot air after all.

We’ll talk about the different types of nasal sprays and their indications.  As for now…well, I’m a bit wiped out, so I’m gonna take a nap.