Meniere’s Disease: Dizziness, Hearing Loss and Tinnitus all in one package 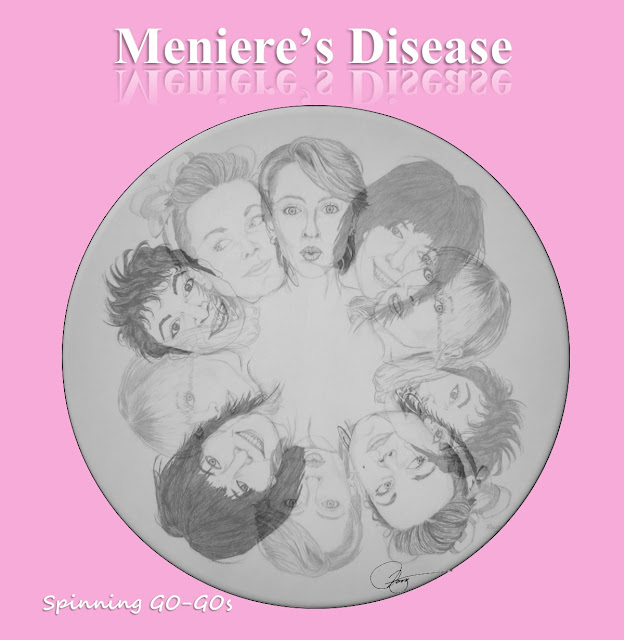 Don’t let the drawing of the spinning Go-Gos throw you off, but it is a good prelude to a discussion about dizziness.  I drew this back in my youth when they first came out, and I cannot recall why I arranged them in a circle, but it makes for fun if you spin the drawing on its center axis.  Attribute this to a young guy’s sense of creativity and being a huge fan of the group.

Meniere's Disease is a mysterious, sometimes frightening disease that has affected millions of people. The cause of Meniere's is really not known.  Meniere’s Disease typically involves a triad of symptoms: episodic dizziness (mainly vertigo or motion-sensation), fluctuating hearing loss usually in one ear, and fluctuating tinnitus (ear noises or ear-ringing), also usually in one ear.

There are two major organs of the inner ear: 1. The cochlea which is responsible for hearing, and 2. The vestibule, which is responsible for balance.  There is a liquid which flows through the chambers and canals of the inner ear and bathes the receptor cells in both the cochlea and vestibule.  The receptor cells connect to a single nerve cell (a neuron) which then travel from the inner ear to the brain.  Those neurons from the cochlea collectively form the cochlear nerve and those from the vestibule form the vestibular nerve (do you see the crafty logic behind medical terminology?). 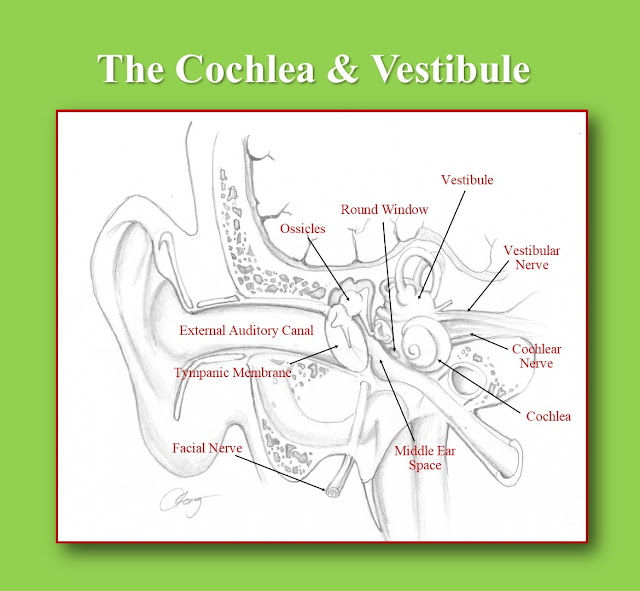 The vestibular nerve sends signals or messages to the brain indicating the latest position of the body.  The eyes, muscles and joints also send positional messages to the brain.  Thus, the inner ear is only one part of a system that helps with the body’s balance.  The brain interprets these messages, and then sends out instructions to the body so that it can adjust and balance itself.  The cochlear nerve sends signals generated from sound stimuli to the ear.  The brain then interprets the meaning of these sounds.

Note: the “fluid” we are talking about is within the dense bony chambers of the inner ear.  Fluid in the middle ear (the space between the ear drum (tympanic membrane) and the that bony inner ear) is entirely a different problem.  Middle ear fluid occurs more commonly and is a cause of otitis media.  Middle ear fluid also is a result of eustachian tube dysfunction.

If the volume of liquid in the chambers and canals increases, the fluid pressure also increases, sending an incorrect message to the brain.   This affects both the cochlea and vestibule.  The fluid normally drains into the endolymphatic sac located in the mastoid bone which then absorbs and removes any excess fluid.  In Meniere's disease, increased fluid pressure causes the symptoms of this disease.  It is thought the production of the fluid is greater than the ability of the inner ear to drain it through the endolymphatic sac.  Common symptoms are: vertigo (spinning or a sensation of movement when the body is stationary), nausea and vomiting (a reaction to the vertigo), hearing loss (or “muffled” sense of hearing), tinnitus (ear ringing, usually of a lower frequency, much like the sound of a seashell held to your ear), and a sense of ear stuffiness or ear fullness (due to the hearing loss).

Meclizine can alleviate and shorten the effects of the acute episode, but this should be used sparingly given its side-effects of sedation.   It is a known as a vestibular sedative.  There are other medications (i.e., ondansetron, phenergan) which can help control nausea and vomiting.  Diuretics (i.e., hydrochlorothiazide and triamterene, usually started at a low dose) are used to reduce the inner ear fluid and often prescribed to prevent or reduce the dizzy episodes.  Antihistamines are sometimes used as there might be an allergy component to this.  To reduce production of inner ear fluid, it is important to decrease salt in the diet; sodium intake should not exceed 2,000mg per day.  I’ll admit this can be very bland, but the typical American diet is way too high in sodium.  Many patients find it helpful to record daily sodium intake in a diary, since one can easily surpass 2,000mg.  Also eliminate or reduce caffeine and alcohol intake, and do not smoke.  Stress relief can also help.  It is also important to stay well-hydrated, drink plenty of fluids, which sounds counter-intuitive, but it is believed it’s the excess dietary sodium that causes the fluid retention, not the oral intake of more water or fluids.

More invasive forms of therapy include a technique called intratympanic injection of either gentamycin or a steroid.  This technique actually is trans-tympanic (across the tympanic membrane).  Gentamycin is a strong antibiotic but has an ototoxic (“ear-toxic”) side-effect where it can kill off the receptor cells in the inner ear.  It is thus considered an ablative therapy, utilizing the ototoxic properties of the drug.  A small needle is placed through the tympanic membrane (after it has been anesthetized) and the gentamycin is injected into the middle ear space.  It then gets absorbed through the round window (a membranous window within the bone of the cochlea) and enters the fluid within the inner ear.  For some reason, gentamycin selectively kills the receptor cells more so in the vestibule rather than the cochlea, but a minority of patients can have toxic effects in the cochlea, and thus one of the risks of this treatment is permanent hearing loss.  A steroid such as dexamethasone can also be delivered in the same way.  Steroids are anti-inflammatory medications, and it is theorized there is an inflammatory reaction during acute episodes of Meniere’s.  There is less of a risk for hearing loss; in fact, the other indication for intratympanic steroid injections is for the treatment of sudden-onset hearing loss.

There are other more involved surgical approaches for Meniere’s disease if these measures are unsuccessful.  Candidates for surgery would often be referred to an otology subspecialist, one who has additional fellowship training beyond ENT residency and who specializes in more complex ear surgery.

Surprisingly, some of the nonmedical therapies work well, such as reducing dietary salt.  I’ve had testimonials from a few patients stating this, especially when they were diligent in the sodium restriction and recorded their salt intake.  They actually had better results than medical therapy.

Most of us know that a sensible diet, proper exercise, avoidance of too much salt and sugar are good for you.  It’s putting this into practice that’s difficult.  As with many things in life that are beneficial, it’s a matter of willpower, the sheer audacity to take control of your physiology and mental weakness to do what’s right and proper for your body, your mind, and ultimately your overall well-being.  To help you through this and perhaps provide some motivation, think beyond yourself; think about those who rely on you, are dependent on you for their well-being and existence.  And I’m going to get a bit preachy here by saying that no matter who you are, you are important to someone else.  We--along with every other human being on this planet--are all vital parts of a collective whole.   Anyway, that’s my sermon.  But I am of the mind to always try the most conservative approach first (i.e., diet and lifestyle changes), then move to pharmaceutical treatments and reserving invasive procedures and surgery for last.  So for Meniere’s sufferers, there are a variety of options out there to help with this problem.