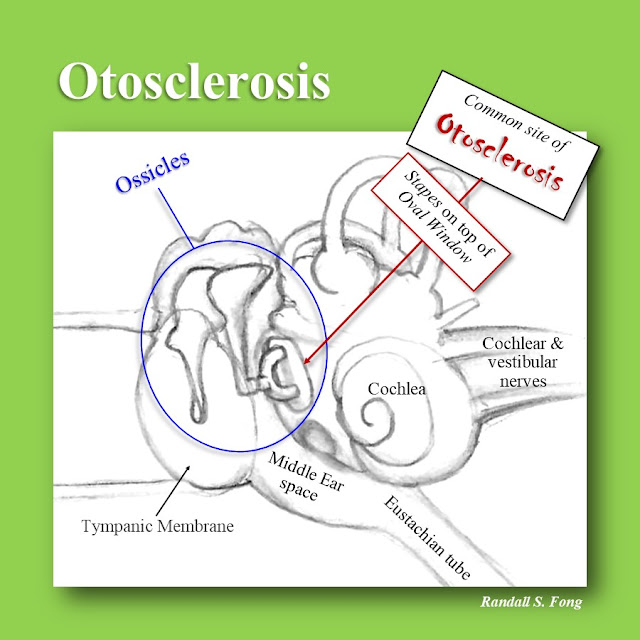 There is a type of hearing loss that typically starts in young adulthood called otosclerosis (where oto = ear and sclerosis = hardening).  Otosclerosis is an inflammatory process that forms hardened bone in the inner ear.  Most often it occurs on the oval window of the cochlea which we’ll get into later.

Sound travels into the ear as pressure waves which is a really, really cool concept in physics and explained more thoroughly in Hearing and the Physics of Sound Mechanics.  For those with a burning desire to delve into wave mechanics., just pop in and view that article which took me a gazillion hours to write.  For the non-Nerdier types, let’s move on.  These pressure waves strike the TM causing it to move or vibrate, thus converting one form of mechanical energy into another (pressure fluctuations in air converted to vibrations of solid structures.  See, I told you this is cool).

When sound enters your ear, it’s carried further into your head by additional, very cool mechanical and electrical processes (see Hearing and How the Ear Processes Sound for the most fascinating explanation of hearing physiology).   I’ll summarize some of the concepts briefly here.  The vibrations from the TM are then transmit by movement of tiny bones deep to it collectively called the ossicles.  The three ossicles are the malleus, incus and the stapes.  The malleus is a hammer-shaped bone attached to the TM and connects to the 2nd ossicle called the incus.  The incus then attaches to the top of the stapes, the 3rd ossicle.  The stapes attaches to the inner ear (cochlea) over the oval window.  The stapes is shaped like a stirrup of a horse saddle, with an arch of bone connected to a footplate. 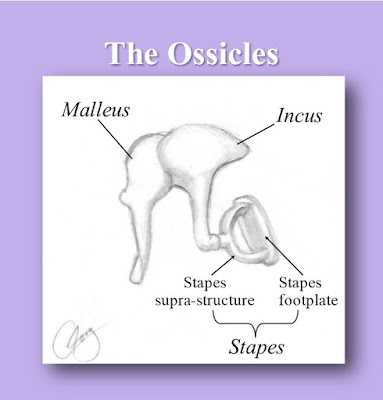 The footplate of the stapes lies on top of the oval window of the cochlea.  The cochlea is a snail-shaped organ full of fluid.  The movement of the stapes foot plate then generates movement of the fluid in the cochlea.  This fluid movement is then detected by tiny hair cells inside the cochlea, each of which is attached to a neuron (a single nerve cell).  The “hair” on these cells are actually thin projections from the cell’s surface called cilia.  The movement of these cilia stimulate chemical reactions within the hair cell which then is transmitted to the attached neuron as an electrical signal.  The neuron joins other neurons to eventually form the auditory nerve (or cochlear nerve), which then carries the signals to the brain, which then interprets the sounds received by the ear. 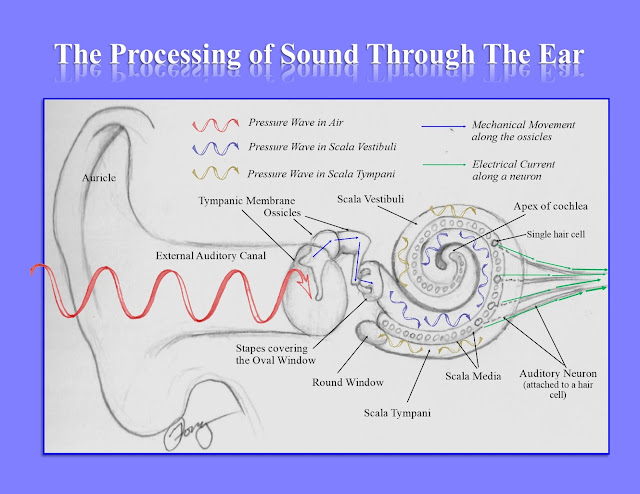 WHAT IS OTOSCLEROSIS AND WHAT IS ITS CAUSE?

Otosclerosis is a bony disorder of the ear.  It starts with formation of abnormal vascular, spongy bone called otospongiosis, which later matures and hardens into the very dense bone of otosclerosis.  This process can occur anywhere the cochlea but has a predilection for the oval window, the site of entry of the cochlea that is attached to the stapes footplate.

Otosclerosis affects the conductive aspects of hearing, namely the parts of the ear (the TM and ossicles) that transmits sound stimuli to the cochlea.  Any affect to hearing from inside cochlea and along the neurons from it to the brain is termed sensorineural.   Otosclerosis causes restriction of movement of the stapes, where movement is impaired and the vibrations are not fully conducted down the ossicular chain to the oval window of the cochlea, and thus causing a conductive hearing loss.  As you can imagine, any point where there is impairment of motion or fixation will impair movement of the entire ossicular chain.  However (and not to confuse the point), sometimes otosclerosis forms inside the cochlea, thus creating a sensorineural hearing loss.  This is a less common form of otosclerosis.

It is uncertain why otosclerosis occurs, but it seems to be hereditary.   About 60% of patients with otosclerosis have a positive family history, meaning someone in their family has it.  Otosclerosis typically occurs in young adults 30-49 yrs of age (where hearing loss is noticeable, but the actual disease likely starts some years prior).  Also in those with a positive family history, it often occurs during pregnancy, which is one reason the incidence of women to men is approximately 2 to 1.

Patients are often diagnosed after they’ve had hearing problems for a time period where otosclerosis has aleady developed from otospongiosis.  However, sometimes the problem is detected earlier, and if it is in the otospongiosis phase, medical treatment can potentially help prevent further hearing loss, though might not reverse or improve the hearing.  Sodium fluoride is typically used since it may help promote calcification and thus reduce the bone remodeling in active otospongiosis.  In other words, it hastens the process along.  However, given hearing loss is usually gradual, patients are often diagnosed later where the otospongiosis process has already developed into otosclerosis, and fluoride treatment would not be effective.

Treatment focuses on improving one’s hearing.  The two major means to do this are: 1.  amplification with a hearing aid or 2.  surgery.  Many people, especially those that are younger, opt for surgery.  However, each patient should be advised about the alternative of a hearing aid, since it is non-invasive, not an irreversible method, and carries very little risk.  Hearing aids do work well to improve hearing, but often the cost is not covered by insurance, and the expense for some people can be prohibitive.

Stapedectomy (where the “-ectomy” = removal) is a surgery to remove the entire stapes bone (the foot plate and the supra-structure).  What remains however is an opening in the cochlea where its fluid (called perilymphatic fluid) can leak out, causing disruption of the finely tuned fluid environment of the cochlea and resulting in a sensorineural hearing loss which is not correctable with surgery.  Typically a thin, membranous graft such as fascia from muscle behind the ear is used to cover the exposed oval window, and then a prosthesis from the incus to this graft is placed to complete the bony ossicular chain.  The prosthesis essentially replaces the stapes.

More commonly nowadays a stapedotomy is performed instead.  The suffix “-otomy” means “creating a hole.”  The supra-structure of the stapes is removed and then a very small hole is created in the footplate, using a very small drill or laser with a very fine beam.  The prosthesis is then placed onto this opening (and sometimes a graft is placed over this before) and then attached to the incus.  The advantage of a stapedotomy is less risk of perilymphatic fluid loss since the entire footplate is not manipulated for removal, and only a small opening is needed into the oval window. 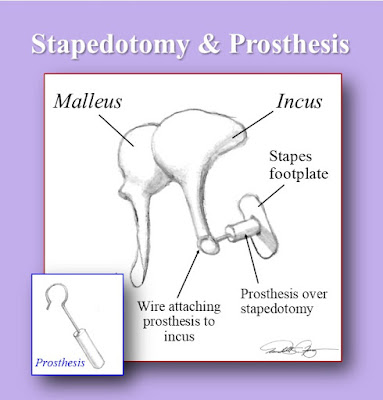 Surgery in either case is done either under local anesthesia with some sedation or general anesthesia (where you’re entirely asleep).  The surgery is done under an operating microscope.  Incisions are made in the skin of the ear canal lateral to the TM, and the TM is carefully elevated to reveal the middle ear space.  The ossicles are then viewed, and the stapes is removed (in a stapedectomy) or in the case of a stapedotomy, the supra-structure is removed and then the small hole is created.  The prosthesis is then placed over the opening into the oval window, and then attached to the incus, the second bone of the ossicular chain.  A commonly used prosthesis looks like a long piston attached to a wire with a loop at its other end.   Once the prosthesis is placed, the loop of wire is then gently crimped around the end of the incus to fixed the prosthesis into position.

Once the prosthesis is placed, the TM is placed back into its natural position.  For those patients having surgery under local anesthesia, the surgeon often will whisper in the ear to determine if the patient can hear.  This is a rough test indicating success of the surgery.  The incisions are often covered with gelfoam (an absorbable packing) to keep the TM flap in proper place until it heals.

Most patients tolerate either surgical approach very well with minimal pain.  To prevent disruption of the surgical site, they must avoid hard nose blowing (which forces air into the eustachian tube, into the middle ear and blows the TM out along with the prosthesis.  This, as you can imagine, would be very, very bad).  Any disruption of the repaired site can cause leakage of perilymphatic fluid, resulting in vertigo (spinning dizziness with nausea and vomiting), permanent hearing loss, and tinnitus (ear ringing).  Typically, patients must avoid strenuous activity, sports or vigorous exercise for about 6-8 weeks.

Well, that covers otosclerosis in a nutshell, and I do mean “nutshell” since there are lengthy textbook chapters (and even entire books) devoted to this subject, written by more knowledgeable otologists (ear subspecialists) than this lowly ENT doc.  But as always, this post along with the simple cartoons was meant as a brief overview.