The Flu Vaccine: Get It! 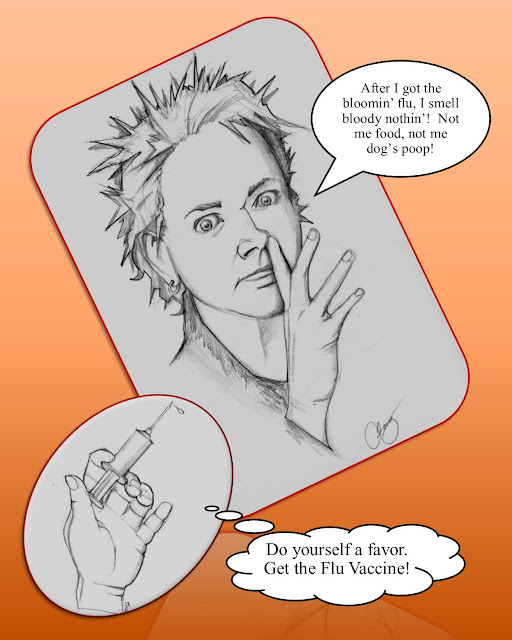 Flu season is a-coming.  And we’re still in the midst of COVID-19.  So please do yourself and everyone around you a favor: get the flu shot!

“Why?” you may ask.  Answer: do you really want to run the risk of another virus wreaking havoc on your body and mind?  Whether you catch the flu or COVID (or God forbid, both) or not, you must admit the mere thought of another virus adds to the stress and anxiety already associated with COVID-19.  Worse yet, do you really want to be a source of contagion to someone else more vulnerable?

Ashamedly, I wasn’t diligent in getting the flu shot.  I once considered myself relatively immune to most any viral disease (aside from HIV, Ebola, etc., the nastier stuff) such as the common cold and flu.  I “reasoned” that since I was exposed to many patients days on end, I was constantly exposed to pathogens and develop an immunity without being symptomatic.  I figured this was the same as getting hundreds of “mini-vaccinations” with live viruses which would trigger my immune system.  That kind of doctor-think is also known as “fooling oneself.”

I caught the flu a few times and admit it was horrible to suffer the fevers, myalgias (body aches), cough and sometimes vomiting.   But the bad symptoms often passed in a day or two.  I missed a day of work only twice in my career.  I got the flu shot once, but I swear I had flu symptoms the day after but to a milder degree (I later understood it is not uncommon to have mild symptoms after a flu shot).  That experience though led me to avoid the flu shot like the plague (sorry, bad pun).

I hung on to this fallacy for quite a long time.   Then one spring month I saw four unrelated patients who all presented with the same complaint and same history.  They all had a bad flu the prior Thanksgiving.  And they all lost their sense of smell and taste during their illness which never recovered after the flu had passed.  As such, they were unable to taste food properly and no longer enjoyed eating.  Two were regular wine drinkers but gave that up since they could no longer appreciate the flavor of wine.

Let me explain the smell/taste relationship.  Taste is inextricably linked to smell.  Taste buds on your tongue provide sensory input only for 5 specific characteristics: salt, sweet, sour, bitter and a hard-to-describe taste called umami (savory, meaty, broth-like; think of ketchup, cheeses and monosodium glutamate for instance).  That’s it.  Just five.   On the other hand, your sense of smell, or your olfactory sense, is created when air molecules from the source of the smell enters your nose and stimulates the olfactory nerves, located just above the nasal chambers, and lie directly under your brain.  There are countless unique odors out there in the world, and a huge number of different flavors, many rendered by the ginormous variety of foods around the world.  It is the olfactory sense which actually renders the quality and nuances of food, giving food its distinctive flavor.  Without a sense of smell, your taste is limited to the 5 taste characteristics picked up by your tongue.

Though not common, the flu can damage the olfactory nerve.  This results in a decease or even complete loss of smell, called anosmia.

This unexpected sequela of the flu was an eye-opener, needless to say.  I love to eat.  I like nearly every type of food…well, except menudo (a soup made from cow intestines), but that’s another story altogether.

I believe two of the patients had the flu shot and the others did not.  Unlike vaccines for some of the more horrible childhood diseases (mentioned below), the flu vaccine doesn’t t cover all of the flu strains and is not 100% effective, but it at least gives you some fighting chance.  I was willing to take any chance I could get to avoid catching the flu and the risk of losing my sense of smell.  I did not want to lose this sense since I love to eat.  More importantly though, I thought, “What if I had a virus but was not symptomatic, but passed it to someone else?”  Clearly this was irresponsible.  Hubris gave way to common sense and I got the flu vaccine when the season arrived, and I’ve been getting it ever since.

I won’t get into details on the wonders of vaccines, and how they’ve proven on large scale bases to prevent—and even eradicate--some of humankind’s nastiest diseases such as polio, small pox, tetanus, meningitis and childhood epiglottis.  Woe to the anti-vaxxers out there, who oppose vaccination based on false premises.  But that is a subject for another post.

ASIDE:  COVID-19 presents another challenge, since many patients can have a loss of smell with this virus, sometimes lacking the other symptoms such as cough and fever.  So in this day and age, you should be tested for COVID-19 if presenting with this symptoms.

Get the vaccinated each year for the flu.  If not for yourself, then as a responsible act for the common good, reducing your risk of becoming a vector of contagion.  If you’re not that inclined about the sake of humanity, then at least for the sake of maintaining your quality lifestyle by preventing the potential loss of smell and taste and allowing you to continue enjoying life’s simplest of pleasures.