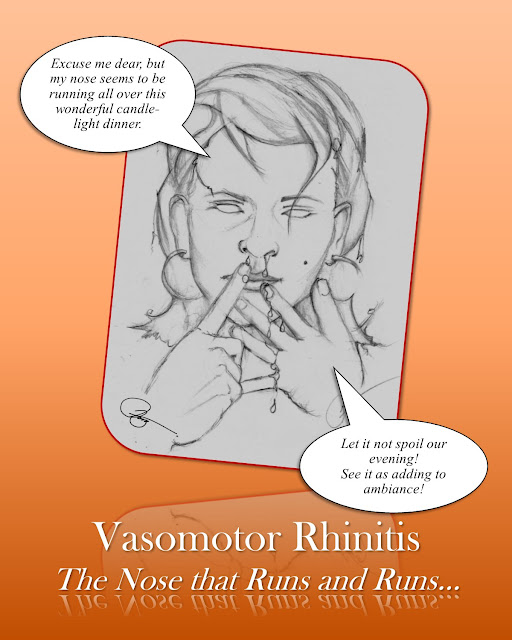 Do you ever find your nose running like a faucet?  Clear watery drainage that occurs for no rhyme or reason.  Or perhaps you’re enjoying a meal and your darn nose starts dripping, forcing you to break proper table manners to blow and wipe your nose right in front of your gorgeous date.

Or you’re outside during a wintery day skiing, snowboarding or just walking around minding your own business, when there ought to be no pollens or allergens in the air, and the darn nose is dripping onto your shirt.

This is a condition called rhinitis, or inflammation of the nasal tissues inside the nose.  But what causes rhinitis?  There are multiple causes, such as allergies, irritants in the air, a viral infection (i.e., the common cold), some medical conditions (hypothyroidism, drug side effects, hormonal causes) or very rare conditions such as a cerebral spinal fluid (CSF) leak (I have a few patient who, upon searching the internet, immediately believe they have the latter problem, which is extremely rare; and as they say in medical school, “when you hear hooves, don’t immediately think of zebras,” meaning don’t immediately interpret something is caused by the most unlikely source).

If we remove allergies, infections and the like from the equation, the most likely cause of this condition is vasomotor rhinitis (VMR).  Vasomotor is a process where nerves stimulate blood vessels to dilate or constrict (open or close, in laymen’s terms).   Blood vessels are permeable, meaning they have small pores that allow flow of fluid and other substances across their lining walls.  Thus, fluid moves in and out of vessels, to and from the surrounding tissues.  Vasodilation and vasoconstriction causes different degrees of fluid permeating into, or absorbing from, the tissues around the vessel.  There are also mucous producing glands beneath the mucosa--that moist, pink tissue lining the inside of your nose and sinuses.

It is believed in VMR there is a deregulation of the various nerves that innervate the nose, which is a fancy way of saying the nerves aren’t acting as they should.  Two of these nerve types arise from two different nerve systems: sympathetic and parasympathetic.

The sympathetic nervous system is responsible for the “flight or fight” response in animals such as us humans.  It causes the “adrenaline surge” we feel when excited, thrilled or scared-to-death by some circumstance.  One of its effects is vasoconstriction of blood vessels, reducing vascular permeability and fluid leakage into surrounding tissues.  It also decreases secretions from other glands, such as mucous glands found beneath the nasal mucosa and also the salivary glands (which is the reason for the dry mouth during times of heightened excitement, i.e., before an important speech, a competitive event such as a running race, or when seeing a lion at the zoo on the wrong side of the fence).

The parasympathetic system on the other hand creates an almost opposite effect, where it is activated when we are resting, eating or indulging in other relaxing activities such as sex (to be more accurate, the very last part of sex is sympathetic, the most exciting part, at least for most people).  These nerves cause vasodilation of blood vessels, creating increased vascular permeability (and hence causing vessels to “leak” fluid to surrounding tissues) but also increases mucous secretions such as from beneath the nasal mucosa.

VMR is not uncommon, often affecting people later in life.  Don’t ask me why.  I’m only reporting the stats.  It’s really not known why it occurs as we age, but just think of it as another nuisance of aging such as declining vision and hearing.  It can occur while eating, in colder weather, drinking alcohol, exposed to strong odors such as perfumes, during sex (yes, a few patients have mentioned this before) and also for no apparent reason whatsoever.  Sometimes medications that alter the parasympathetic or sympathetic nerves or that affect blood flow can cause this, such as certain anti-hypertension drugs (to lower blood pressure).

There are treatments for VMR, though it is often more difficult to treat compared to allergic rhinitis.  The more effective medications are in the form of nasal sprays.  Check out Nasal Sprays: A General Explanation of the Various Types for more information on this topic.  Below are some treatments for VMR.

Ipratropium bromide is an anti-cholinergic spray. Without getting into the nitty details of biochemistry, ipratropium blocks the neurotransmitters of the parasympathetic nerves in the nose, thus preventing their affect on the nasal tissues.  This results in decreased secretions and hence a ceasing or reduction of the nasal runniness.

Azelastine is another spray but is an antihistamine.  It has indications for both allergic and vasomotor rhinitis.  Antihistamines block allergy-triggered cell reactions, and it is not entirely clear how this works  for VMR, but it is hypothesized that it reduces the inflammatory effects of the nasal tissues.

Nasal steroids (i.e., fluticasone, triamcinolone) don’t seem to work in VMR.  These sprays are often tried first, especially since they are now available over-the-counter (OTC) without a prescription.

Nasal decongestant sprays such as oxymetazoline (i.e, Afrin) or phenylephrine (Neosynephrine) might also help since they both act as vasoconstrictors and thus reduces blood vessel leakiness.  However these sprays have limited use given their risk of rebound congestion and addiction, known as rhinitis medicamentosa.

Oral decongestants such as pseudoephedrne (Sudafed) might help since they are vasoconstrictors.  But they have side effects such as increased blood pressure and heart rate, insomnia, increased agitation or nervousness or anxiety (think of a caffeine-like effect).

Oral antihistamines often do not help since they work more on blocking the allergic aspects of rhinitis.  This is somewhat of a paradox given the topical antihistamine (azelastine) can help in VMR.

Avoidance of triggers, certain lifestyle and diet changes may help (though giving up alcohol and sex may be non-options for most).  As I’ve said, VMR can be more difficulty to treat compared allergic causes of nasal problems.  Carry a fancy handkerchief or a wad of Kleenex so it won’t spoil your date-night.