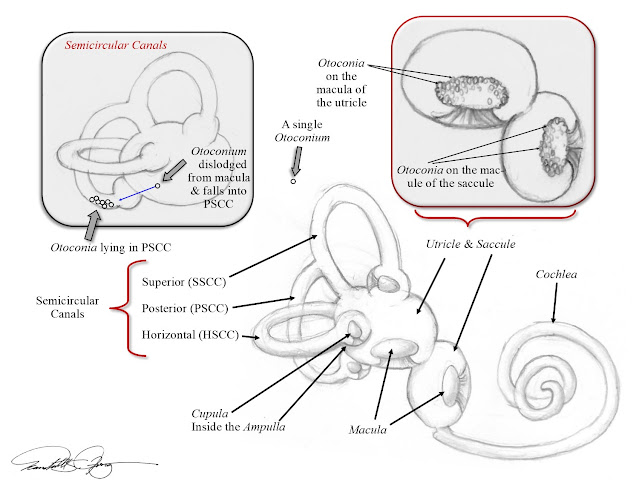 There’s a strange ailment that causes dizziness in a rather large number of people, called Benign Paroxysmal Positional Vertigo or BPPV.  More specifically, it causes vertigo—an all-too-unpleasant sensation of spinning or of things spinning around you.  It can throw you off-balance, making you wobble like a drunken fool, but sans the pleasantries of a hearty drink ladened with a wonderful bit alcohol.

BPPV typically occurs abruptly, of sudden-onset, and without any particular cause; thus the term paroxysmal in its name.  It’s a result of tiny “crystals” or “stones” located in one portion of the vestibule of the inner ear that have been displaced and landed in different portion of that organ.  For those needing more detail, here it comes:

We’ve discussed this before in The Vestibular System: Form and Function.  Basically, the two sections of the vestibular system respond to different types of movement.  The three semicircular canals (SCC) monitor rotational (circular) movement and the utricle and saccule monitor linear movement.  They all share a fluid called endolymph, that freely runs through each.

Each SCC has a cupula at one end, which moves when the fluid moves during head rotation.  This sends signals through nerves that go to the brain.   From the brain, nerves then go to muscles attached to the eyes (extra-occular muscles or EOM for short), moving the eyes smoothly with the same velocity as the head movement but in an opposite direction, to keep the eyes’ relative position in space.  This locks the eyes onto a visual target to prevent bad things such as falling, staggering or bumping into a very large, mean dude who lost a front tooth during his last fight.   This is called the vesibulo-occular reflex (VOR).

The maculae contained in the utricle and saccule monitor also sending nerve signals to the brain which processes this information and then sends signals to the muscles of the spine via the vestibulospinal tract.  This helps monitor changes in orientation to gravity and linear or straight-line movement.  The maculae have on their surface tiny calcium crystals called otoliths (oto = ear, lith = stone; see who simple medical terminology can be?).

BPPV is believed to be caused by debris floating in the endolymph, mainly dislodged otoconia.  In other words, some of the otoconia found on the maculae of the utricle and saccule somehow separate off those structures and land into one of the SCCs.  This sometimes occurs in head injury, where a strong bonk to the head loosens and dislodges the stones.  Many times there is no triggering event, and the cause is considered idiopathic (meaning “we don’t know”).

Thus, BPPV is also known as canalithiasis (“canal with stones”).  The posterior SCC (PSCC) is most commonly involved, though the horizontal (HSCC) and rarely the superior (SSCC) can be involved.  Figure 1 shows my outstanding stick drawing of a guy with BPPV involving his right PSCC sitting up, happy as a clam.  Notice the dislodged otoconia are at the gravity-dependent, or bottom-most position, of the canal. 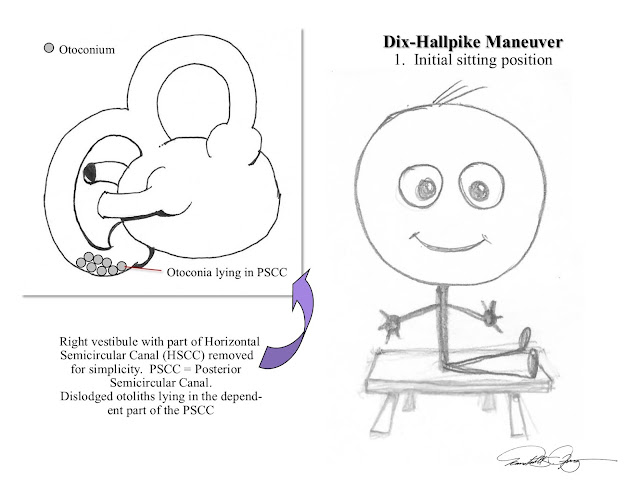 Notice in Figure 1 part of the HSCC has been cut-away to better view the effects on the PSCC.  The cochlea also has been removed in my cartoonish drawing of the vestibule to simplify matters, ‘cause I’m a simple-minded guy.  Just ask my family.

The patient sits in this position on a flat bed with head towards the right in this example.  This is the first part of the Dix-Hallpike Maneuver, a tool to help us diagnose BPPV.   I warn the patient about potential vertigo in the event BPPV is actually noted, so they’re better prepared for the carnival-spinning fun to  follow.

When the head is moved into the provoking position (turned to the involved side and then downward, the otoconia freely move to the gravity-dependent position.  The otoconia cause the fluid within the involved PSCC to also move as Figure 2 demonstrates.  Normally when the head moves in a linear fashion such as this, the fluid in the SCCs do not tend to move, since fluid only moves with rotational head movement. 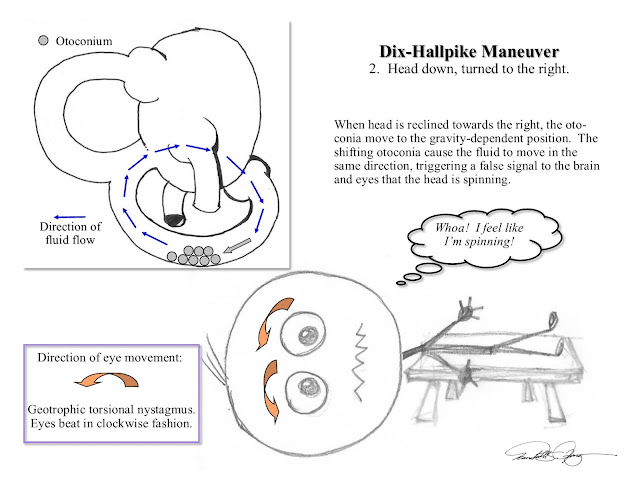 Thus, the fluid movement in that SCC sends a signal to the brain—really a false signal, since it is telling the brain the head is spinning when it actually is not.  The brain then sends nerve signals to the EOMs triggering the eyes to drift unintentionally.  This causes nystagmus of the eye, a jerking or beating movement to-and-fro.  In this case, torsional (twisting) geotrophic (towards the ground) nystagmus is noted.  I focus on the fine blood vessels of the sclera (the white part of the eyeball) to help visualize the nystagmus. 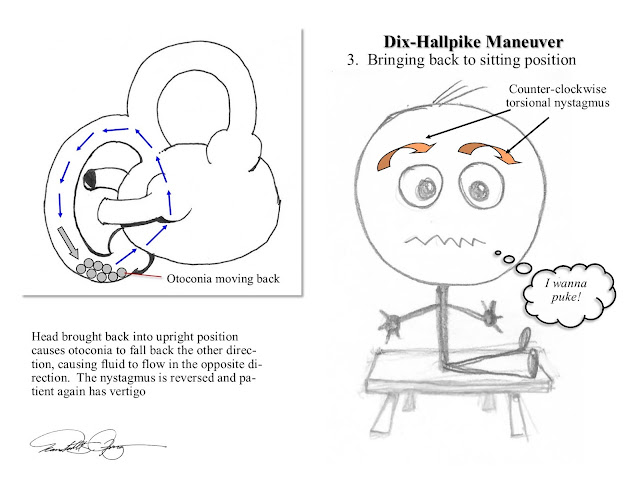 Not to be cruel, but the maneuver is done again.  The brain interprets the signals it receives from the abnormally functioning PSCC as incorrect.  It receives input from other sources, such as joint receptors that detect body motion in space and the visual input from sight, all of which tells the brain the head and body aren’t actually rotating at all.  The brain says, “well, that darn PSCC is firing off on his own and those other systems aren’t doing a thing.”  Annoyed by the PSCC’s false claims, the brain wants to abolish the false signal from the PSCC for the sake of the entire body. “There is no ‘I’ in ‘team’ or in ‘PSCC’!” cries the brain.  Thus, when the Dix-Hallpike is performed again, one often sees much less or no nystagmus, and the patient surprisingly feels less or no vertigo.  This is knowns as central compensation, where the central nervous system (your brain) interprets all the input it receives and corrects the false signals from the dysfunctional organ.

The Dix-Hallpike maneuver is repeated for the opposite side, since sometimes both sides –though uncommonly--can be involved

For those with BPPV, there is treatment.  Oftentimes, patients are prescribed anti-dizziness medications such as meclizine or Anti-vert, but medications for the most part do not help and should be avoided due to the sedating side-effects, and particularly since most BPPV patients have vertigo episodes that are relatively short.  There are a couple of ways to treat BPPV.

This is a form of repositioning those dislodged otoconia and is effective for both PSCC and SSCC involvement.  It’s done by a doctor, other healthcare provider or physical therapist, or one can do this at home on a bed.   This is done only for BPPV in one ear.  Let’s assume we are treating right-sided BPPV.

1.  Start with the Dix-Hallpike maneuver, lying on the back with the affected ear down and slightly hanging (neck extended) off the edge of the bed (providing there is no underlying neck problems, otherwise don’t bend the neck), namely lying down on the right side.   Vertigo will occur, let it pass, and keep that position for 1-2 minutes.

2.  Turn the head slowly toward the opposite left side and keep that position.  This helps to move the otoliths out of the SCC and into the utricle where they belong.

3.  The body is rolled onto the left side, where the patient is lying on the left shoulder.

4.  Keeping the head turned to the side, the patient is then brought up into a sitting position.

5.  The patient is then instructed not to bend over, lie back flat or move the head for the rest of the day, and sleep in upright position for 48 hours and do not lie on the affected (right) side during that time.

This method often yields remission with a single treatment.

This is a habituation exercise that requires one to repeatedly lie on the effected side, provoking the nystagmus and vertigo.

2.  Sit up and you'll notice a "reversal" vertigo.  Wait for the reversal vertigo to stop.

3.   Lie back down on the affected side, wait until 30 seconds after vertigo stops, then sit back up.  If no vertigo is noted with the ear down, keep the position for 30 seconds before sitting up.

This type of treatment relies on the central compensation phenomenon and thus may take days to several weeks for full resolution.

The majority of patients have complete resolution with either of these methods.  Occasionally, one might have a relapse long after, but the treatments again allow remission from this problem.  This is one of the most common causes of dizziness that we ENTs see in our practice, and compared to other forms of dizziness, BPPV is easier to diagnose and more often easier to manage.