Running: A Lost Shoe and the Concept of Aerobic vs Anaerobic 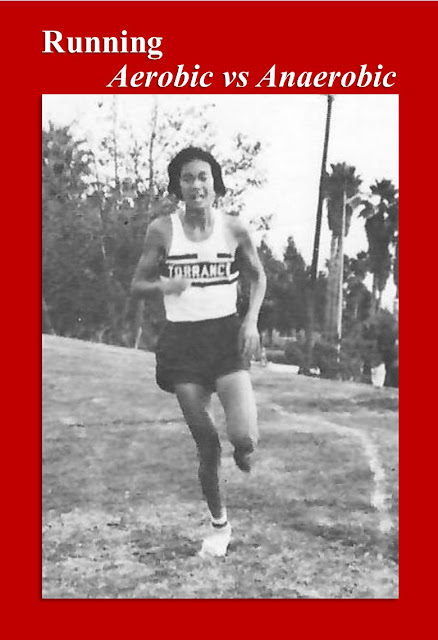 I came across this grainy yearbook photo shot in my sophomore year of high school, during our final race of the season—the regional cross-country championships.  Of all the pictures taken that year, the Yearbook Committee chose this one.  Why? I have no clue.  Maybe they thought it captured the brutal essence of a masochistic sport.  Or perhaps they were just a funny bunch of people with a bizarre sense of humor.  Anyway, as those in the media are apt to do, they obviously chose the most unflattering photo in their collection.

Behind the grimace and body language that speaks of intolerable pain and agonizing discouragement are nothing more than…intolerable pain and agonizing discouragement.  Look to the lower limits of the photo for one reason.  Yeah, that’s right—I’m missing a shoe.  You could say it’s a foreshadowing of things to come, my first foray into barefoot running, though the flopping sock betrays this was not intentional.

The virtues of running, particularly barefooted, I’ve extolled previously (Barefoot Running: It’s Good for the Sole/Soul), but any form of aerobic exercise is beneficial, along with sessions that take you anaerobic.  This is a good segue into these two main phases of calorie-burning; and being runner, I’ll use running as an example.

Primer on Anaerobic vs Aerobic Exercise

Here’s an ultra-short primer on a little biochemistry.  To simply matters, I’ve dispensed with much of the complicated detail and nomenclature one finds in standard textbooks.  First of all, your body must process food into a usable form of energy in order to engage in any type of activity including exercise.  A sugar molecule (namely glucose) is a form of stored energy derived from the stuff you eat.  Glucose must be processed to create the useable molecules of energy, known as adenosine triphosphate, more familiarly abbreviated as ATP.  Consider ATP as a molecular unit that stores and carries energy.  There are two ways of creating ATP from glucose:  aerobic and anaerobic.

Aerobic is more efficient, meaning this process produces more molecules of ATP per glucose molecule.  This process requires the consumption of oxygen, where “aer“ is Greek for “air.”  Slower, long distance running is aerobic, where ATP is most efficiently created with the consumption of oxygen from the air we breathe.  Hence, we need oxygen to produce the maximal amount of energy from each molecule of glucose.  This process (which includes the Kreb’s Cycle) takes a lot of biochemical steps to produce ATP and takes more time, but the amount of energy (the number of ATP molecules) produced allows sustained physical activity such as running for long periods of time.  In the aerobic process, 36 ATP molecules are created per glucose molecule.

On the flip side, with anaerobic running (the prefix “an-“ means “without”; so anaerobic means “without oxygen”) your need for energy is more immediate, and ATP is created much faster but without the use of oxygen.  These immediate needs are not met with the slower Kreb’s cycle.  The anaerobic process produces ATP much faster, albeit fewer ATPs per molecule of glucose.  In situations such as fast running, lifting heavy objects or screaming at the top of your lungs for help, ATP is needed immediately, on the spot.  Your body utilizes the anaerobic process to quickly churn out ATP.  This process has fewer biochemical steps and thus is much faster than the aerobic process, but produces only 2 ATP molecules per molecule of glucose.  You burn up glucose much faster.  This is great for bursts of speed such as sprinting as fast as you can from scary things like big animals wanting to eat you or some gal’s angry boyfriend wanting to kill you.

Many folks are familiar with the term calorie, both with the consumption and burning of calories.  It takes 4 calories to consume a molecule of glucose or in other words, a molecule of glucose provides 4 calories.  So what is a calorie?  A calorie is a unit of energy, defined as the amount of heat to raise 1 gram of water 1 degree Celsius.  Thus, the more glucose you use, the more calories you burn.

Here’s the catch.  You can only do anaerobic activity for much shorter periods of time.  There’s a nasty by-product called lactic acid created during this process.  Your liver usually processes the lactic acid but when levels really build up during anaerobic activity, lactic acid is absorbed by the muscles. This is the reason your muscles really hurt and cramp if you over do it.  You can only tolerate so much lactic acid build-up for a certain amount of time.  The anaerobic state was designed for much shorter “fight or flight” responses, when the human organism needs to move super-fast, such as chasing down prey for dinner or being chased as prey for someone else’s dinner.  Lactic acid eventually needs to be metabolized and cleared from your system, but this only can be done once the anaerobic activity has stopped and the aerobic system kicks back in.  Fortunately, the body knows when enough is enough and the brain signals you to stop, slow down, or for those who ignore the signals, shuts you down and makes you do something really crazy like pass out.

As you can see, anaerobic activity burns a ton more calories in a shorter period of time, and thus more molecules of glucose.  But you can only remain in that anaerobic zone for a short period of time.

Yet in distance races such as the 3-mile cross-country event, one uses a combination of both aerobic and anaerobic processes.  The majority of the activity is powered by the aerobic pathway, but that extra “umph” to maintain a faster speed is provided by the anaerobic path, though the level of lactic acid in blood and muscle stays at a tolerable level.  This is also known as lactate tolerance; those who are trained to tolerate higher levels of lactic acid can run faster at farther distances.  Going above that level ultimately requires you to slow down to reduce the lactic acid levels.  Likewise, those who are well-trained are able to run at a sustained, faster pace without creating much lactic acid.  This is where speed work such as intervals (running repeated short distances at a fast pace) comes into play to improve that tolerance as well as raise the threshold where lactic acid is produced.

Getting back to that high school race and the lost shoe, the torment on my face shows what it feels like to be anaerobic, though mixed with a huge dose of disappointment.  During the season, our team won every dual race against each school in our league, so we were slated to win the regional championship—a final race against every other team in the league.

The race started great.  I kept an even pace and stayed well in the lead pack.  I felt great and was cruising nicely.  I was in contention to win a medal unless something unnatural befell me.  And like a terrible example of Murphy’s Law, that unnatural event fell right into my lap.  More precisely, it grabbed me by the foot.

After doing so well in every single race up to that most important race of races, it was my bad luck that some fluke of unnaturalness reared its freaking, ugly head.   We were running across wet grass when my foot sunk a little too deep into the soft mud beneath.  As I lifted my foot up, a strong suction kept hold of my shoe and in the ground there it remained.

I lost my shoe.  Yes, my foot came up and the only thing attached to it was my flopping sock.  Never before in a race or training had I ever lost a shoe.  By the time I realized what happened, my poor lonely shoe was about ten yards behind, swallowed in a muddy grave.  Rapidly, I tried to process what I should do: 1. Turn and run back, pull the shoe out of the mud, untie it, place it back on my foot and tie it again, or 2. Run without the shoe.  Figuring the former would waste too much valuable time, I settled for the latter.  I ran the rest of the race with one shoe.

Needless to say, I did not do well.  My sock became soggy and wet and was half-way off.  It was one of those tube socks popular in the 1970s, socks meant to be pulled up to the knees.  Only my socks were rather old and well-used and the elastic fibers had stretched out considerably from months of use, such that the socks, succumbing to the natural law of gravity, wrinkled up and gathered about my ankles.  The front part of the sock flopped about beyond my toes with each stride like a dead fish.  It never occurred to me to take off the other shoe and both socks and run completely barefoot.  Had I known what I know today, I believe I would have done that.  Anyway, I fell farther and farther back, as other runners whom I easily beat before, passed me by in droves.

Fortunately, our team still won and we became league champs, no thanks to me.  Nowadays when I look at that old photo, I don’t dwell on the agony of defeat, but laugh at the circumstance which in retrospect paves way for an interesting story and a bit of learning I can share with others.