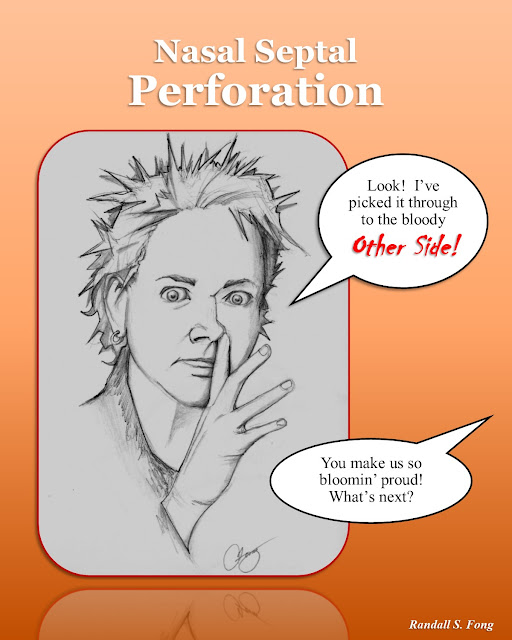 One day you find yourself bored and begin fiddling with body parts.  Not an uncommon occupation, especially in youngsters, but adults too may find themselves doing this once in a great while.  We’ll avoid the anatomy that those of the dirt-minded mentality are thinking about and let’s say your fingers wander to your nose.  Let’s also assume you are one of the uncommon sort who tends to ignore the rules of common sense.   You begin picking your nose and find some dried buggers.  This becomes a daily occupation, one you find pleasurable, but you notice a little blood each time you pick.  Despite this, you won’t give up your new preoccupation.  You clip 9 of your fingernails, keeping one super-long to serve as a natural picking device.  You create alternative uses for everyday household objects, and discover tweezers, paper clips and pointy chopsticks serve as nifty instruments for picking.

Heeding words of “wisdom” you’ve heard somewhere long ago (your drunken college dormmate?) where “two is better than one,” you start picking the other side.  This becomes an obsession and you continue picking both sides until the crusts become scabs of dried blood and the bleeding gets a little worse.  But you-being-you, and prone to not-so-smart habits, continue on your merry nasal-picking excursions each and every day, ignoring the teasing and wise-ass remarks from family and friends.

Or you’re improperly using a nasal spray, noticing each time a little discomfort or pain and ignoring the blood and scabs with each use.  You-being-you believe more is better and continue using the spray, ignoring centuries-old wisdom by “doing the same thing over and over again and expecting a different result.”

One day you find your finger or tweezers or chopstick passes from one side of the nose to the other.  “Oops,” you wonder to yourself, perhaps saying it aloud, or if really aloof, ignore this completely, thinking, “maybe it was like that all along.”   Of course, this means only one thing: you’ve created a hole through your nasal septum.

The nasal septum is that wall or partition that separates the right and left sides of your nose.  Notice the word “separates.”  This means an opening or a hole across the septum in not normal. 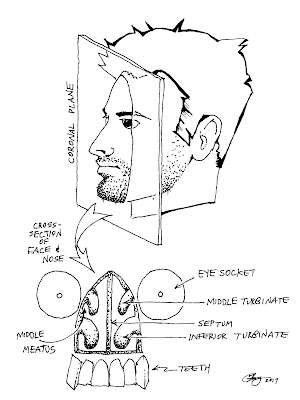 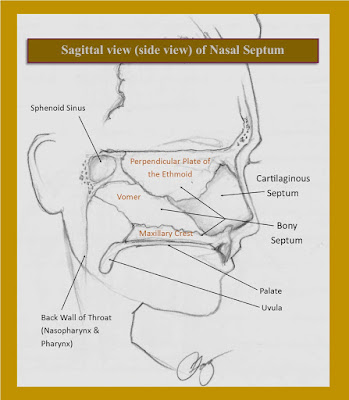 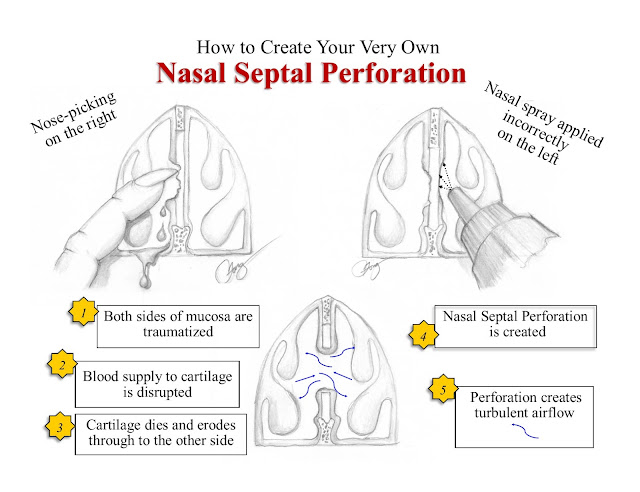 This is called a septal perforation. 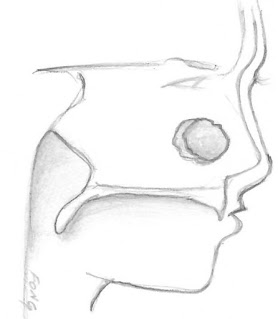 A septal perforation can occur for a number of reasons:

1.  Trauma from repeated nose-picking.  I’ve seen this several times.  We in the medical profession fancily call this digital trauma, where digit = finger (and not referring to the binary system of 1’s and 0’s).  Of course, trauma from the use of other instruments does the same thing.  The patient creates a “vicious cycle” of nasal-pickingàmucosal traumaàbleedingàscab formationànasal-picking of the scabàbleedingà etc., etc,… until one day the finger or favorite nose-picking device traverses from one side to the other.

2.  Trauma from prior injury.  Sometimes a badly injured septum or a septal hematoma (blood forms between the septal mucosa) that disrupts blood supply to the underlying cartilage leading to a perforation. This results in devitalization of the mucosa on each side of the cartilaginous septum, and ultimately erosion through the cartilage.

3.  Nasal drug use, whether legal or illegal.  Cocaine has a fairly high risk of nasal perforations, particularly with repeated use.  The drug vasoconstricts, reducing the blood supply to the mucosa.  It’s actually a great drug for surgery such as septoplasties and sinus surgery, but used in a very diluted concentration compared to what’s used on the street.  There are a number of legal nasal sprays out there (see Nasal Sprays: A General Explanation), but each can pose this risk if improperly used (Nasal Sprays: Proper Technique and Nasal Sprays Proper Technique Explained Again).  The method of injury is similar or there’s mechanical trauma from the tip of the spray’s nozzle rubbing the septum.

4.  Nasal piercings.  This goes without saying.

5.  Weird diseases such as Wegener’s granulomatosis, sarcoidosis, tuberculosis, lymphomas are systemic diseases that sometimes occur in the nose and septum.  Unusual tissue is typically found along the septal edges if discovered early.  A biopsy of this often helps with the diagnosis.

6.  Iatrogenic: a fancy term meaning “caused by the doctor” or whomever is treating you.  This is an uncommonly complication nasal surgery, such as a nasal septoplasty.   Other causes are tubes through the nose (nasogastric or NG tube), endotracheal tubes passed through the nose for anesthesia, and oxygen delivered through a nasal canula.  With the latter, the prongs of the canula either rub on the septum, are blow dry oxygen directly to the septum causing dryness, bleeding, crusting, etc.  leading to the perforation.

Once a perforation occurs, turbulent airflow is created, since air was not meant to run from one side to the other, but straight from front to back in a nice layered fashion termed laminar airflow (flowing in layers) which is properly warmed and humidified.  But with a perforation, the airflow is not unidirectional, which leads to flow in a number of directions (ie, turbulent) and thus is not properly humified by the mucosa.  This causes dryness, crusting, impaired nasal breathing and sometimes bleeding.  One in a while, a patient with a septal perforation can present with a bad nose bleed, only to discover the perforation after he/she is seen for treatment.

Unfortunately, once a perforation forms, it never heals and closes off completely, unless it is very small initially.  Surgical repair is complicated and fraught with a low success rate, with a risk of making the perforation worse.  I and many other ENT docs avoid surgical repair and opt for a much simpler approach: a septal prosthesis.

This nifty device, also called a septal button, covers both sides of the septum with thin sheets of pliable silicon, connect to one another with a small intervening cylindrical strut.  You could say the device sandwiches the septum, covering the perforation.

Septal buttons are commercially available and placed in the office with a local anesthetic.  The button is cut to fit within a particular patient’s nasal cavity.  One flange of the button is folded upon itself with a hemostat or bayonet forceps and slowly advanced into the nose, through the perforation and into the other side.  With some degree of finesse, the button is further manipulated so the entire flange unfolds on the opposite side, taking care not to push the entire button through; otherwise you’ve got to do the whole thing over again.

Most folks tolerate placement quite well and notice an improvement in breathing, a reduction in irritating scabs, crusts and bleeding.  I instruct these patients to use nasal saline on a regular basis to keep the button and nose moist (2-3 times a day or more).

Of course, the best treatment is to avoid creating a perforation in the first place, and heeding the sage warnings from your mom and other wise folks: