Hearing and The Inner Workings of the Cochlea 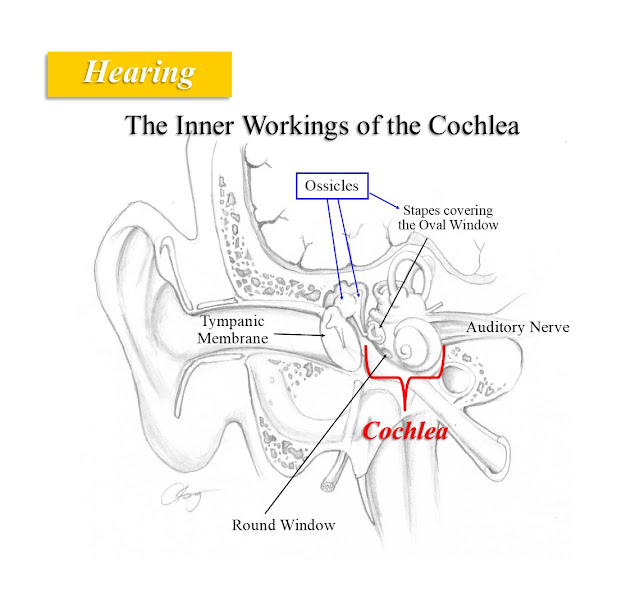 Before we get into different causes of hearing loss, we ought to touch base on inner ear anatomy and function.  We’ve covered the concept of sound mechanics and how the ear processes sound.   This article explains hearing on a microscopic level, down to those tiny “hair cells” that many of you have heard about.

What the heck is a “hair cell” anyway?  I’ll try to simplify matters and avoid too much technical stuff, because quite honestly, several hours of re-reviewing basic science made me dizzy (a word we ENT docs try to avoid).  For you scientists and engineers out there, forgive me if the details are lacking.

A hair cell really doesn’t have hair.  What we term “hair” are thin, bendable projections from the cell’s membrane, collectively called cilia.  “Hair cell” (HC) is much easier to pronounce then “multi-ciliated cell of the cochlea.”  In summary: sound waves hit the eardrum (tympanic membrane or TM)àTM vibrates the ossicles (tiny bones)àmechanical energy created which is transmitted to a window into the inner ear (cochlea)àstimulates fluid movement inside cochleaà this fluid movement causes movement of thin membranes on the Organ of Corti, which contain the HCsàcilia on the HCs bend and create a nerve impulseànerve impulse travels to the brain.  Let’s break this down.

The cochlea looks like a shell with 2 ½ turns.  Imagine unwinding that shell and laying it out as bony tube.   If you’ve unwound a tasty cinnamon roll, well you get the picture.  Now let’s slice though the unwound tube to create a cross-section view of it.  This is figure 1.  The cochlea has a bony chamber filled with perilymph, a type of fluid.  Inside the bony chamber is separate membranous chamber (i.e., a tube within a tube; much like an inner tube of a tire) which is filled with endolymph, a fluid that is different in composition than perilymph.

Sound waves strike the TM, causing it to move back and forth.  This movement then vibrates the ossicles.  This vibratory movement is then transmitted from one ossicle to the other until it stimulates the last ossicle called the stapes.  Notice the stapes is much smaller than the TM, but the same amount of mechanical energy is delivered to it.  This in essence amplifies the sound energy.  The stapes lies directly over the oval window (OW) of the cochlea.  The vibrating stapes creates a fluid wave through the OW and into perilymph fluid on the other side.  This perilymph fills the inside of the bony cochlea called the scala vestibuli.  This fluid wave then causes movement of the Reissner’s membrane, which is the outer part of a membranous chamber, another fluid-filled tube called the scala media.   The scala media contains the beforementioned endolymphatic fluid which is then put into motion by the vibrating Reisser’s membrane.  The endolymphatic fluid causes movement of yet another membrane—the tectorial membrane.  The hair cells are beneath the tectorial membrane, and their cilia (“hairs”) are embedded within that membrane.  The hair cells and the tectorial membrane form a unit called the Organ of Corti. 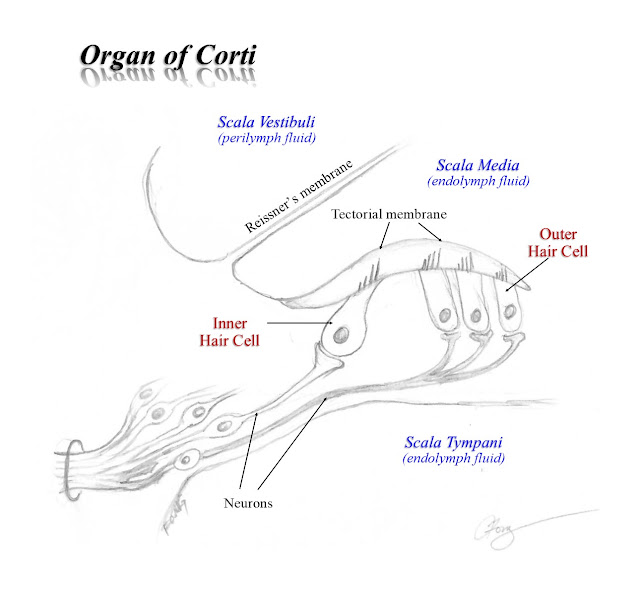 There are two types of hair cells:  Outer Hair Cells (OHC) and Inner Hair Cells (IHC).  I won’t get into the details on this since—I swear this is the God’s honest truth—one of my textbooks covers this in 6 pages of small-font print.  Let’s just say there are fewer IHCs, but the majority of sound energy is picked up by these cells.  The OHCs are responsible for only picking up about 5% of sound transmission, though they are greater in number.

There are also multiple neurons (individual nerve cells) that attach to each IHC, but only one neuron that branches to connect to several OHCs.  Once the cilia of a HC are stimulated by the movement of the tectorial membrane, chemical processes inside the HC stimulate the neurons attached to it.  An electrical current (formed from neurochemical processes along the neuron) travels along the neurons, where they eventually gather with too-many-to-count other neurons to form the auditory nerve.  This nerve travels to your brainstem and then upwards into a region on the side of the brain called the auditory cortex, where the signals are translated into meaningful information that is far beyond the scope of this post to explain (and literally is a textbook in itself, and one of the reasons medical school and residency take years and years to complete).

Sound has different frequencies.  Frequency = the number of wave cycles per second.  Frequency is also known as pitch.  Examples of high frequency sounds are screaming children or the ear-curdling sound of fingernails on a chalkboard.  An example of a low frequency sound is that booming subwoofer from that teenage kid’s car down the street.  The specific sound frequency is also transmitted as frequency-specific fluid movement in the cochlea. The Organs of Corti and their HCs are frequency-specific in how they pick up the stimulus.  Higher frequencies are picked up by HCs closest to the oval window; the frequencies gradually decrease as one travels further away from the oval window to the apex of the cochlear, where the lowest frequencies are picked up.  So the farther the HCs are from the oval window, the lower the frequency to which they respond.  Cool, no? 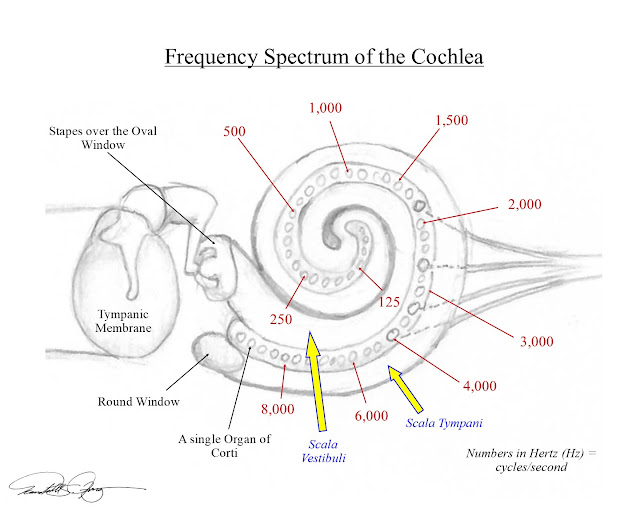 After all is said and done, you may wonder (or not, since you have better things to do), “what happens to the fluid waves moving within a closed bony chamber?  Won’t they bounce back and create waves going in different directions?  Or wouldn’t they accumulate too much fluid pressure as more and more sound is transmitted until the cochlea explodes?”  Answer: no!  Let me explain.

The fluid wave in the scala vestibuli travels further to the apex (peak or tip) of the cochlea, and then turns around to travel down the scala tympani (filled with the same perilymphatic fluid as the scala vestibuli).  See Figure 4.   It then towards the round window.  As the fluid wave travels from oval window to the round window, its gradually weakens along the way until it reaches the round window in a weaker state compared to what it was when first generated at the oval window.  It also is not transformed or amplified by another set of ossicles nor back to the TM.  The reduced sound then is transformed out of the cochlea and back into an air pressure wave in the middle ear, but at far reduced intensity, such that it does not interfere with sound transmission going into the cochlea. 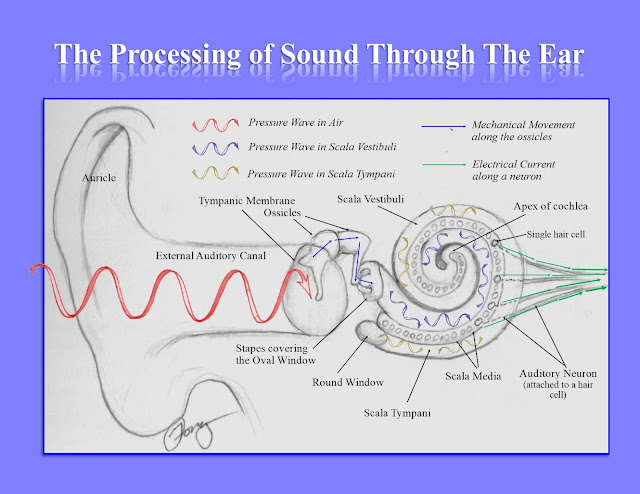 There you have it.  All this re-study of basic science makes me hunkering for a beer and burger, and a bit of loud music.