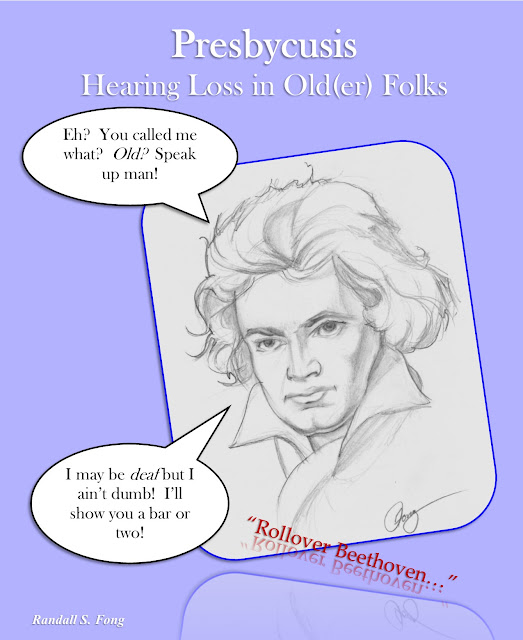 Two retired guys walk into a bar.  One says to the other.  “What’d you say?  I stink?  You’re a jerk!”  His buddy shouts back, “No!  I said, ‘do you want a drink!’  You’re such an idiot!”  Or a patient tells his doctor, “Everyone is mumbling and talking low—can’t understand a thing they say.  And my family complains that I turn the T.V. volume way up!  Even those stupid actors mumble!  What’s wrong with everybody!”  Or a couple shows up for the husband’s appointment and upon asking the reason he’s there, he points to his wife, “I don’t have a problem, she does.”  She rolls her eyes and declares, “Either he can’t hear or he’s ignoring me!”  The poor guy looks at me and shrugs his shoulders.

Welcome to the world of age-related hearing loss, what we medical people call presbycusis.  Presby- is the prefix for “you’re getting old.”  Presbyopia (age-related decline in vision), presbylarynx (vocal problems related to aging), presbyesophagus (age-related dysfunction of the esophagus), etc., are just a handful of the wonderful array of conditions we can look forward to in our advancing years.

Presbycusis is not an uncommon phenomenon.  It’s the most common cause of hearing loss in older adults.  About 1/3 of 65-year-olds and ½ of those 75 or older have some degree of hearing loss.  Of course, a history of loud noise exposure, firearm use, (see Noise-Induced Hearing Loss) particularly without hearing protection, can also damage hearing on top of the loss due to aging.

Diminished hearing makes communication more difficult.  It can impair a person’s ability to interact with family and friends or affect their ability to function in the outside world.   This can lead to a reduction or withdrawal from meaningful social engagement, resulting in social isolation, depression and even dementia, horrible things to face in our golden years.

Presbycusis most often starts with reduced hearing in the higher frequencies of the hearing spectrum (see Figure 3 of The Inner Workings of the Cochlea). where most of the meaningful speech sounds are found.  This is the reason many folks with high-frequency hearing loss have difficulty hearing women and young children, and thus the reason a lot of older guys are accused of ignoring their wives.  Many say they can hear people talking to them; it’s their misunderstanding of the spoken words that is problematic.

The diagnosis of presbycusis arises after other causes have been ruled-out, requiring a good exam or the ears and other related structures.  Auditory testing is needed, performed in a sound-proof both by a qualified audiologist (specialist in hearing).  Several tests are done including pure-tones at different frequencies and volumes (loudness) along with speech comprehension tests.  It’s not as simple as it sounds, and is a rather complicated set of testing which is the reason audiologists need advanced training beyond college, often obtaining a doctorate degree

Presbycusis causes a sensorineural hearing loss (SNHL), meaning the loss is due to problems with the cochlea (inner ear) and/or nerves that leave the cochlea.  Typically, there is an age-related degeneration of the tiny “hair cells”  within the cochlea that convert sound energy into a nerve impulse.  Once those hair cells degenerate, they no longer can send impulses down the tiny neurons that eventually carry the signal to the brain.

There are a number of other causes for SNHL.  Chronic or sudden injury due to loud noise, some drugs that are toxic to the ear (ototoxic), infections, and a few other diseased can lead to this, and can worsen hearing in an older adult who already has presbycusis.

The treatment for SNHL is a hearing aid, often for both ears.  There otherwise is no medical or surgical cure for SNHL (other than cochlear implants, which are reserved only for those who are profoundly deaf and receive no benefit for a hearing aid).

Hearing aids are designed to amplify only those sounds that are reduced on the patient’s audiogram. This requires an audiologist to properly fit and program the aids tailored specifically for the patient’s unique hearing pattern.  A device that simply amplifies the entire sound spectrum is often insufficient or results in a worsening of the person’s auditory ability, since unwanted background noise is amplified as well, rendering the device useless.  For some folks, the hearing loss may not pose a significant problem other than the intermittent, “What?  Can you say that again?”  It becomes a problem however if the hearing-impaired person avoids communicating with others since they can’t hear or understand what is spoken, or if others avoid them since repeating oneself tends to be frustrating.  For these reasons, I typically advise those with hearing loss to seriously consider hearing aids particularly when they notice any early effects on their quality of life, i.e., when it affects (and preferably before) their ability to engage meaningfully with others.  Humans thrive on social interaction--it’s in our nature.  To lose this ability is a terrible waste, a loss of a huge natural resource, for those older adults can impart valuable wisdom and experience, enriching the lives of everyone around them.